The NTSB calls for new tests to prove lithium-ion battery installations in aircraft can mitigate hazards tied to thermal runaway. 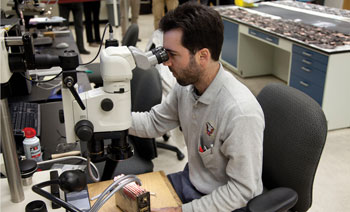 The Boeing 787’s lithium-ion battery designs might not have fully accounted for the hazards of internal short circuiting, largely because of inadequate processes used to support certification of the battery, the U.S. National Transportation Safety Board (NTSB) says.

To correct these NTSB-identified shortcomings, the board issued a series of recommendations in late May to the U.S. Federal Aviation Administration (FAA), including a call for the development of a test capable of demonstrating safety performance in case of an internal short circuit in a lithium-ion battery.

The recommendations were developed as a result of the NTSB’s ongoing investigation of a Jan. 7, 2013, fire in a lithium-ion battery in a Japan Airlines 787 that was parked at a gate at Logan International Airport in Boston after a flight from Narita, Japan. All passengers and crewmembers had deplaned, and the fire was discovered when cleaning personnel saw smoke in the aft cabin. About the same time, a maintenance technician opened the aft electronic equipment bay and found heavy smoke and a small flame emanating from the auxiliary power unit (APU) battery case. Aircraft rescue and fire fighting personnel extinguished the fire, with one firefighter receiving minor injuries in the process. Cleaning and maintenance personnel were not hurt.

The NTSB expects to issue its final report on the fire later this year, but the board’s preliminary reports indicate that the fire began after one of eight cells in the APU lithium-ion battery experienced “an uncontrollable increase in temperature and pressure (known as a thermal runaway) as a result of an internal short circuit.”

The overheating of that cell spread to adjacent cells, “resulting in the cascading thermal runaway of several cells and the release of additional smoke and flammable electrolyte from the battery case,” the NTSB said in a letter accompanying its safety recommendations to the FAA.

The reaction in this battery was unexpected, considering the results of tests that were performed on the APU battery system as part of the 787 certification program, the letter said.

The NTSB letter noted that the main battery in the 787 is also a lithium-ion battery — and that the 787 is the first large transport-category airplane to be equipped with permanently installed lithium-ion main and APU batteries. Lithium-ion batteries also are incorporated into the flight control electronics, emergency lighting and the recorder-independent power supply, the letter said.

In addition to the Boston fire, a blaze broke out in the main battery of an All Nippon Airways 787 during a Jan. 16, 2013, domestic flight in Japan. No one was injured in the incident, which ended with an emergency landing in Takamatsu soon after takeoff. The Japan Transport Safety Board, which is continuing its investigation of the event, characterized it as a serious incident.

In its letter, the NTSB traced the history of the development of the 787 battery systems to a meeting of Boeing officials and FAA aircraft certification representatives in 2004, when Boeing first indicated its intention to install lithium-ion batteries.

Because the FAA determined that the regulations that existed at the time did not address all safety-related characteristics of lithium-ion batteries, the agency issued special conditions that described additional requirements that it considered essential to provide a level of safety equal to that established in existing aircraft battery standards.

One of the nine provisions said that the lithium-ion batteries must be designed to “preclude the occurrence of self-sustaining, uncontrolled increases in temperature or pressure.” During an April 2013 NTSB hearing, representatives of Boeing and the FAA testified that when the 787 was certificated, “they believed that an uncontrolled increase in temperature or pressure could only occur if a cell or a battery were overcharged.” There has been no evidence that the battery in the Boston incident was overcharged, the NTSB said.

Preliminary information obtained by accident investigators indicated that Boeing “underestimated the more serious effects of an internal short circuit, that is, thermal runaway of other cells within the battery, excessive heat, flammable electrolyte release and fire,” the letter said.

The letter noted that experts in lithium-ion battery technology have said that the conditions within a battery cell that lead to an internal short circuit cannot easily be detected and managed by a battery-monitoring system. As an example, the document cited the 787 involved in the Boston fire, which experienced “no abnormal indications or maintenance messages related to issues with the incident battery” between its delivery on Dec. 20, 2012, and the fire 18 days later, on Jan. 7, 2013.

In tests conducted in March 2014, the NTSB used three different methods of simulating an internal short circuit in a single cell of a 787 lithium-ion battery to compare the energy levels of the resulting thermal runaways.

“Preliminary test results indicated that, immediately after inducing the short circuit, the maximum temperature at a common location on the cell cases ranged from about 240 degrees C to 375 degrees C (about 464 degrees F to 707 degrees F), depending on the method used, [and] the cell case temperature at various locations differed by as much as about 270 degrees C/[486] degrees F … .

“Although various other factors, such as cell age, were not evaluated during this testing, the preliminary test results were consistent with the observations of industry experts who indicated that the method used to simulate a cell internal short circuit in a thermal runaway abuse test could have a significant impact on the resulting thermal energy released. Thus the method used to initiate thermal runaway as part of an internal short circuit abuse test could also influence how the thermal runaway condition could affect other cells within a battery.”

The NTSB said that its post-accident tests were “not exhaustive.” Nevertheless, the results indicated that “to fully understand the most severe effects that could occur when a single cell within a lithium-ion battery undergoes thermal runaway, various factors expected during normal operations need to be included in aircraft certification tests,” the NTSB said. “In particular, it is important to ensure that installation, environmental and usage factors are fully accounted for in abuse tests intended to demonstrate the most severe effects of an internal short circuit-induced thermal runaway.”

The RTCA document that is the current standard for certification of lithium-ion battery design and certification for aviation purposes includes abuse testing but “does not address all of the unique aspects of a battery’s installation on an aircraft,” the NTSB said.

Therefore, the board recommended that the FAA “develop abuse tests that subject a single cell within a permanently installed, rechargeable lithium-ion battery to thermal runaway and demonstrate that the battery installation mitigates all hazardous effects of propagation to other cells and the release of electrolyte, fire or explosive debris outside the battery case. The tests should replicate the battery installation on the aircraft and be conducted under conditions that produce the most severe outcome.”

After the tests have been developed, the NTSB said, the FAA should require aircraft manufacturers to perform the tests as part of the certification process for new aircraft with a permanently installed, rechargeable lithium-ion battery.

In developing the tests, the NTSB recommended that the FAA work with experts in lithium-ion battery technology to “develop guidance on acceptable methods to induce thermal runaway that most reliably simulate[s] cell internal short-circuiting hazards at the cell, battery and aircraft levels.”

Ongoing research could help the FAA identify accurate methods of simulating an internal short circuit in a lithium-ion battery, the NTSB said.

“An evaluation of various methods to replicate internal short circuiting … could help manufacturers determine whether they are using appropriate test methods to demonstrate the most severe effects that could result at the cell, battery and aircraft levels, given the battery’s unique design and installation,” the NTSB said.

Another recommendation called on the FAA to review the methods of compliance used in certifying permanently installed, rechargeable lithium-ion batteries in in-service aircraft and, if necessary, to require additional tests to ensure adequate protection against “all adverse effects of a cell thermal runaway.”

Noting that technical experts outside the FAA could provide “valuable insights about best practices and test protocols for validating system and equipment safety performance during certification when new technology is incorporated,” the NTSB also recommended that the FAA develop a policy of establishing independent panels of experts to provide advice on certifying the safety of new technology. These panels should be established as early as possible in the certification process “to ensure that the most current research and information related to the technology could be incorporated during the program,” the NTSB said.