The Role of Experience

Fatal crashes were far more likely for HEMS pilots with only a few years on the job, a new study says.

Helicopter emergency medical services (HEMS) pilots with less than six years of experience were nine times more likely than their more experienced colleagues to be involved in fatal crashes at night in deteriorating weather conditions, a team of Australian researchers says.1

In a report published in the September issue of Aerospace Medicine and Human Performance, the researchers recommended “interventions” for low-time pilots to help them build experience that will make these accidents less likely to occur.

Their study analyzed U.S. National Transportation Safety Board reports on 32 fatal accidents between 1995 and 2013 that involved single pilots flying under visual flight rules (VFR); all 32 accidents involved either loss of control or controlled flight into terrain (CFIT).

If — during a preflight assessment of conditions, or while en route — a HEMS pilot finds an increased likelihood of a hazardous operational condition (HOC), such as an IMC encounter, he or she is expected to refuse the flight or to end it, the report said.

“If the mission continues into HOC, the higher cognitive demand increases mission task workload, which can cause working memory to become saturated,” the report said. In response to lowering clouds, HEMS pilots sometimes descend below the clouds, to altitudes at which the sight path is obstructed and spatial disorientation results; in these conditions, an accident becomes more likely.

The report cited the authors’ previous research,2 which found that pilots with less than four years of experience in HEMS flying had a “significantly higher likelihood of involvement in nighttime VFR HEMS operational accidents” and were more likely “to make operational decision-based errors than pilots with more than 10 years DTE [domain task experience” — that is, experience with HEMS flights] (ASW, 11/16, “In Brief: Experience and Fatal Night HEMS Crashes”).

“The lower levels of weather-related cue acquisition and utilization were, in part, a function of lower DTE,” the report said, adding that HEMS pilots with at least six years of DTE had “domain expertise consistent with higher levels of weather-related cue utilization, which facilitated more accurate diagnostic or weather situation assessment skills.”

In the newer study, the researchers sought to determine whether a relationship between the length of time a pilot had spent in HEMS operations and “potential cloud-ceiling conditions, measured by TDPS [temperature dew point spread]3 existed in night VFR operations accidents,” the report said.

TDPS is the difference between the air temperature and the dew point (the temperature to which air must be cooled to allow water vapor in the air to condense into water, in the form of dew). As the TDPS decreases, relative humidity increases, and when the TDPS is zero, humidity is 100 percent. A low TDPS at the surface indicates that conditions favor the development of fog.

The report noted that U.S. Federal Aviation Administration guidance says that every 1-degree decrease in TDPS is likely to result in a 400-ft decrease in the cloud ceiling.

“Using that guidance and regulation requirements, flights conducted in a 3.7-degree C and 2.5-C TDPS would represent a cloud ceiling of 1,500 ft and 1,000 ft AGL [above ground level], respectively,” the report said. “In most cases, pilots can determine probability of poor visual conditions en route and at the destination [if they know] the TDPS.”

The report added that, considering the increased chance of night VFR operations accidents, “it was hypothesized that fatal outcomes in the zero-degrees C to 4 degrees C TDPS range would be most associated with low-DTE pilots.

In their analysis of the 32 accident reports, the researchers found what they called “a significant negative relationship” between a pilot’s HEMS experience and a zero- to 4-degree TDPS. Of the 32 flights, 27 were conducted within the zero- to 4-degree TDPS range, including 20 that were “significantly associated” with bad weather. Twenty-one of the flights involved encounters with non–visual meteorological conditions (VMC) weather.

The report said that flights in the zero- to 4-degree TDPS range were significantly associated with fatal outcomes, and that, of 108 occupants of the 32 helicopters involved in fatal crashes, only eight people survived. 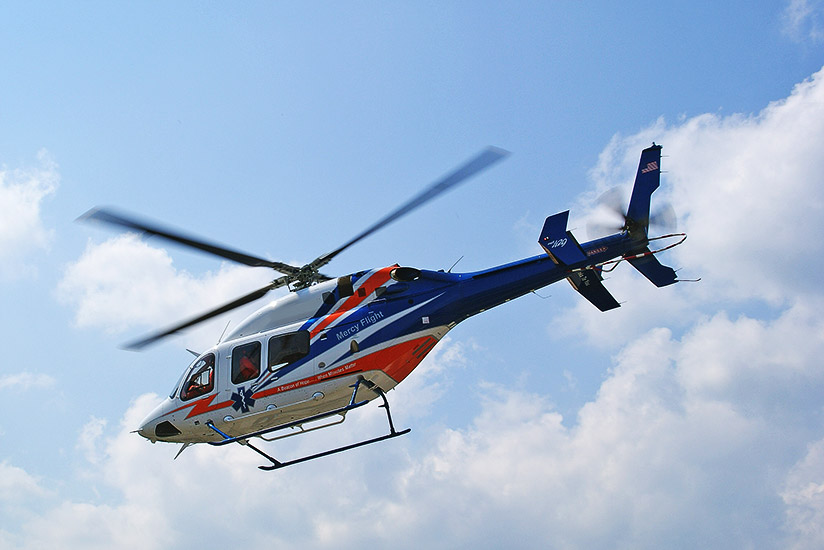 The report also found that as a pilot’s experience level increased, the TDPS range of a given flight was reduced.

“The resulting effect of potential lower cloud ceiling and visibility (i.e., non-VMC) was found to be significant,” the report said. “It estimated a 10-year HEMS pilot in this study would encounter approximately 260-ft lower cloud ceiling AGL, compared to a one-year pilot. Missions in the zero- to 4-degree C TDPS range were 11 times more likely to encounter adverse weather, and six times more likely to be fatal,” compared with flights conducted with a TDPS of at least 5 degrees C.”

However, the report added that, “of the 27 missions which crashed in the zero- to 4-degree C TDPS range, those flown by low-DTE pilots were over nine times more likely to be fatal” than those flown by pilots with at least six years of HEMS experience.”

Flights in conditions with a zero-degree TDPS were all non-VMC flights and were 15 times more likely to have been flown by a pilot with considerable HEMS flight time, the report said, describing this finding as “surprising, given their experience.”

The study found that pilots with little HEMS experience, especially those with less than two years of experience, were involved in 56 percent of nighttime accidents.

On the other hand, the report said, pilots with considerable HEMS experience have “greater capacity to conduct more accurate/realistic probability and consequence assessments for various flight profiles.”

As a result, these experienced pilots were not often involved in these accidents, the report said.

“Their knowledge of practices and conditions which increase risk, like ‘scud running,’ and of historical night accidents, is consistent with the availability heuristic” — a mental shortcut in which an individual makes a judgment by relying on relevant examples that come immediately to mind, the report said. “A high-DTE pilot’s repository of diagnostic operational cues enables rapid assessment of safety risks such as likelihood of HOC with lowering TDPS, consequences of CFIT or [loss of control], and development of alternative courses of action to minimize those risks.”

The report said that researchers assumed that the accident pilots all intended to follow regulations that laid out weather limits for HEMS flights.

“However,” the report added, “in rapidly deteriorating conditions, margins can reduce quickly. For example, a 3-degree TDPS (an approximate 1,200-ft cloud ceiling) decreasing to 2 degrees potentially reduces cloud ceiling to 800 ft AGL. Therefore, low-DTE pilots’ likely perception of increased risk in some cases was not aligned with the reality of expected marginal conditions, which more experienced pilots would have perceived.”

When high-DTE pilots decided to proceed with flights in conditions involving the lowest TDPS, they may have determined that there was a high likelihood that they would fly into hazardous conditions, the report said. Nevertheless, it added that their “large aggregation of years and decades of domain-acquired knowledge meant they possessed a repertoire of highly refined and diagnostic feature-event relationships or cues. They may have considered their capabilities ruled out an accident or assessed their chance of [loss of control] or suffering CFIT as minimal,” the report said.

Previous decisions may have “given them overconfidence in their ability to perform in HOC,” the report added.

In their earlier research, the authors suggested that low-time HEMS pilots should be supervised through an industry mentoring program and that they fly using weather criteria that are more stringent than the minimums established through regulations or by their operators. Additional research is required to identify other preventive interventions and risk factors that would help reduce chances of fatal accidents, the new report said.