Australian turboprop airplanes experienced an average of 83 power plant failures a year between 2012 and 2016, with almost all classified as “low-risk” events, according to data from the Australian Transport Safety Bureau (ATSB).

The ATSB data, included in a June 15 report, Power Plant Failures in Turboprop-Powered Aircraft,1 says 1,894 occurrences involving technical failures on turboprop aircraft were reported between 2012 and 2016, and of those, 417 (22 percent) involved power plant problems (Figure 1). The number of occurrences reported each year has been declining, the report said, citing data that showed a decrease from 467 in 2012 to 270 in 2016. 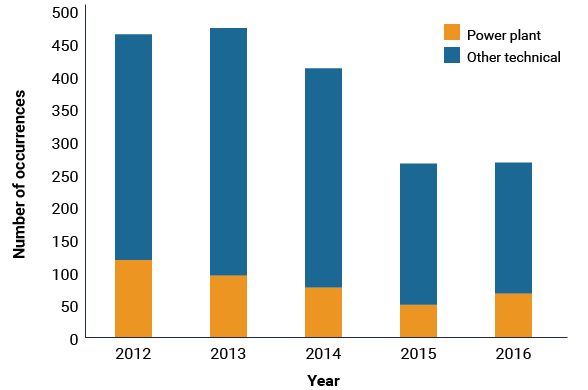 Of occurrences involving operators with a known number of flight hours, 314 reports were filed between 2012 and 2015, the report said.

“With a combined total of just over 1.4 million flight hours for these aircraft in this timeframe, this equates to approximately 2.2 occurrences every 10,000 flight hours, or roughly one occurrence every 4,500 flight hours,” the report added.

An analysis of the 417 power plant occurrences found that they occurred in 11 operational groups (Figure 2) and that 44 percent involved high-capacity commercial air transport aircraft.2 Of these, more than three quarters were Bombardier DHC-8s, which fall into both high-capacity and low-capacity categories. Aircraft in low-capacity operations accounted for 24 percent of the total, and those engaged in charter operations accounted for 14 percent. 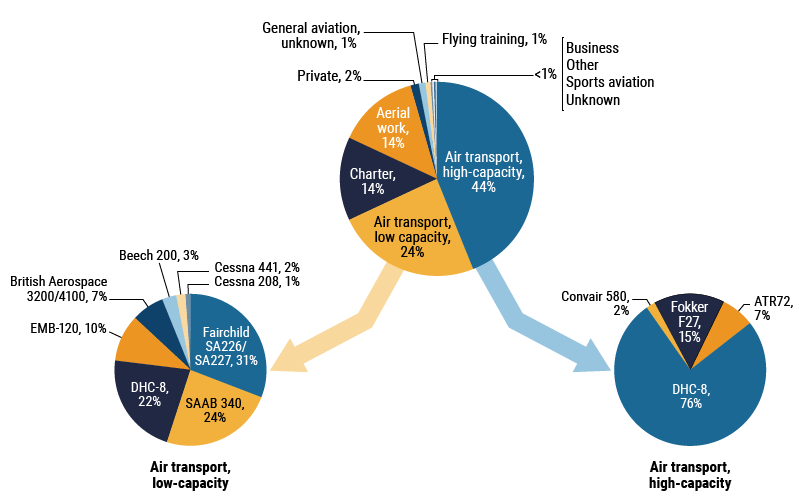 More than half (244, or 52.5 percent) of the power plant occurrences involved abnormal engine indications, including abnormal readings of engine power output or temperature, engine overspeed or engine over-torque warnings, along with “any general reports or observations of abnormal sights or sounds by a crewmember,” the report said (Figure 3). 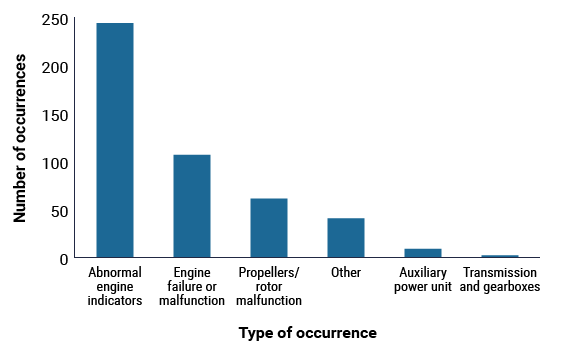 Of the 244 cases of abnormal engine indications, only one was classified as an accident — the Dec. 13, 2016, crash of a Beech 200 in Moomba, South Australia, following illumination of the left engine fire warning light. The ATSB’s final report on the accident said that the pilot shut down the engine and used the fire extinguisher, and the airplane touched down in sand to the left of the runway threshold. The pilot and the two passengers were uninjured but the airplane was substantially damaged.3

The second-most frequent occurrence type involved engine failure or malfunction, which accounted for 107 events (23.1 percent) of the total, including 33 events that led to in-flight engine shutdowns, the report said.

Pratt & Whitney Canada PW100/150 engines were associated with more power plant occurrences (236) than any other family of engines, the report said, followed by Honeywell International TPE331 engines (72), Pratt & Whitney Canada PT6A engines (69) and General Electric CT7 engines (25), the report said (Figure 4). Most of these engine models are used in a number of different types of aircraft. 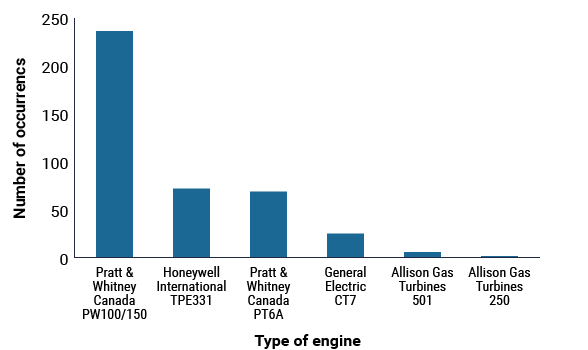 Nearly half (185, or 44.4 percent) of all power plant–related occurrences involved Bombardier DHC-8 airplanes, followed by Fairchild SA226/227 Metros, with 43, the report said (Table 1).

Of the 417 power plant occurrences, 96 percent were classified as “low-risk,” four were considered “medium-risk,” and three were “high-risk,” the report said. None was classified as “very high-risk.”

All three high-risk occurrences involved engine failures or malfunctions with forced or precautionary landings in Cessna 208 Caravans, the report said.

Two occurrences resulted in minor injuries; both involved aircraft that were flown in agricultural operations, experienced engine problems and collided with terrain, the report said.

The Convair 580 had the highest rate of power plant–related occurrences — 13.9 per 10,000 flight hours — but the report noted that “with only four occurrences between 2012 and 2015, the high rate was due to comparatively low flight hours.” All four occurrences were classified as low-risk and were considered incidents rather than accidents or serious incidents. Their operator, which was the only Convair 580 operator in Australia, told the ATSB that the fleet was retired in 2017 and replaced with newer turbofan aircraft.