U.S. Helicopter Accident  Rates Down in 2014

The U.S. civil helicopter accident and fatal accident rates both declined sharply in 2014, which the United States Helicopter Safety Team (USHST) says is indicative of stakeholders learning how to…

The U.S. civil helicopter accident and fatal accident rates both declined sharply in 2014, which the United States Helicopter Safety Team (USHST) says is indicative of stakeholders learning how to better manage risk. 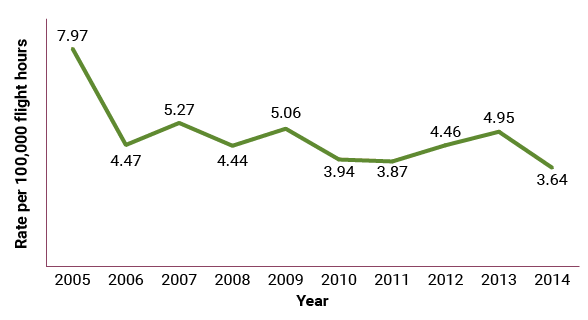 Leadership from the American Helicopter Society, the Helicopter Association International, manufacturers and other interested organizations, and the U.S. Federal Aviation Administration (FAA) joined together to form IHST in 2005 following the first International Helicopter Safety Symposium. The intent of the organization is to develop and implement a “data-driven, benefit-focused” safety program designed to continuously reduce the risk of helicopter accidents, according to the IHST website <ihst.org>. The USHST comprises U.S. government and industry leaders.

The USHST and the IHST have a goal of reducing the civil helicopter accident rate by 80 percent by 2016. As a baseline, the organizations use the accident rate for the 2001–2005 period, which represents the five years before the IHST’s founding in 2005 and the launching of its safety education efforts. Last year’s civil helicopter accident rate of 3.64 per 100,000 flight hours represents a decrease of 54.3 percent from the 2001–2005 baseline of 7.97 accidents per 100,000 flight hours.2 To achieve the USHST’s 80 percent goal, the accident rate would need to reach 1.59 for 2016. 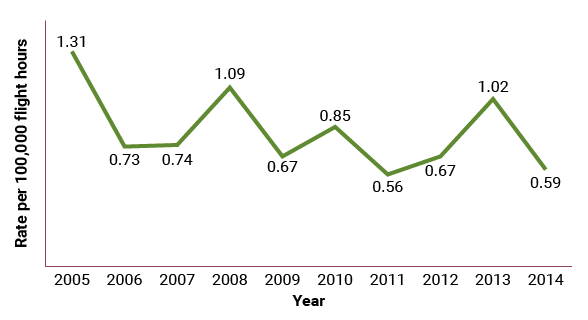 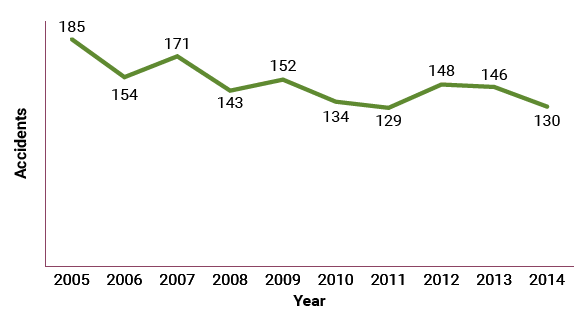 “One hundred thirty accidents during the year is 130 too many, but we’re glad to see that the numbers are continuing to go down,” said Jim Viola, manager of the FAA’s General Aviation and Commercial Division, who serves as USHST government co-chair. “More helicopter operators, pilots, instructors and mechanics across the country are learning how to better manage risk and are infusing their culture with effective safety habits. Safety messages from the USHST and the IHST are getting through at the grassroots level.”

The number of fatal accidents also declined, falling to 21 in 2014, after having spiked to 30 in 2013 from 23 in 2012 (Figure 4). The graph of annual fatal accidents since 2005 does not show the same steady downward trend seen with total accidents over the same period. Prompted by the sharp increase in fatal accidents from 2012 to 2013, the IHST in May 2014 asked stakeholders to “establish an additional focus regarding the steps that can be taken to prevent fatalities in helicopter accidents,” according to an IHST press release. 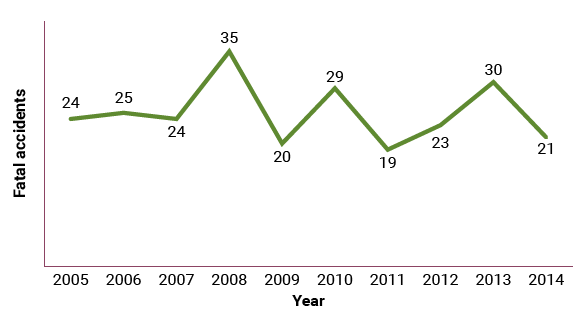 USHST said a closer look at the operations in the “other” category showed that private/personal flying and instructional operations were especially susceptible to accidents at night, with most involving pilots with fewer than 100 hours of nighttime flying experience.

When USHST looked at accidents that happened during nighttime emergency operations, such as emergency medical services, fire fighting or law enforcement, it found that pilots with 500 or more hours of night flying were involved in 55 percent of the 40 accidents. Pilots with 100 to 499 hours of night flying experience were involved in 40 percent, or 16 of the 40 accidents, and pilots with fewer than 10 hours were involved in 9 percent. “In large part, this is due to the fact that most pilots flying these emergency missions have accumulated a lot of night flight experience and they are frequently flying in challenging conditions,” USHST said. “But the data also illustrate that even the most experienced pilots have accidents in nighttime conditions.”

The U.S. fleet of active4 general aviation aircraft is projected to grow at an average annual rate of 0.4 percent from an estimated 198,860 in 2014 to 214,260 by 2035, according to the FAA Aerospace Forecast Fiscal Years 2015-2035, which was released in March. The number of turbine-powered aircraft, including rotorcraft, is expected to grow at an average rate of 2.4 percent per year over the forecast period to 45,905 aircraft. The number of active piston-powered aircraft, including rotorcraft, is forecast to decrease at an annual average rate of 0.5 percent from the 2014 total of 139,890 to 125,935 by 2035. The piston-powered rotorcraft segment of that fleet, however, is expected to grow at a rate of 2.1 percent per year.