New Zealand investigators tie an AS350 crash to poor understanding of the risks of underslung load operations. 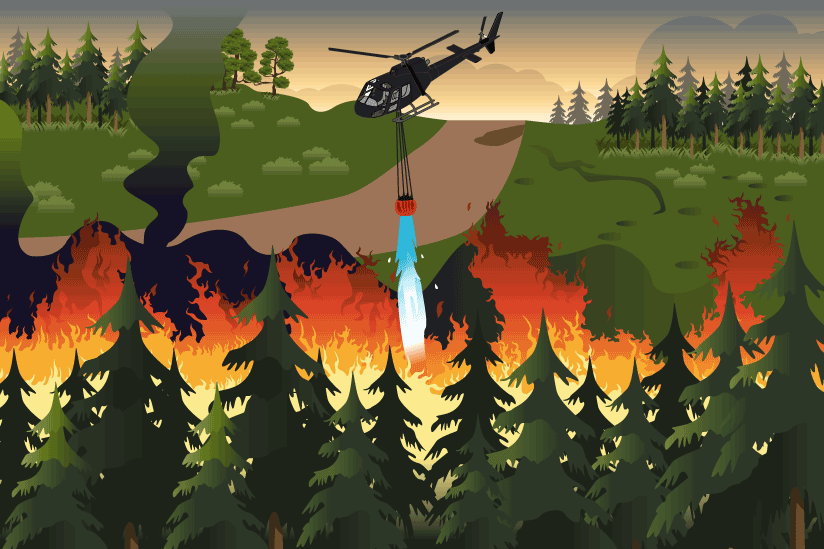 The pilot of a Eurocopter AS350 BA was en route to a New Zealand pond to refill an underslung firefighting bucket when the bucket’s suspension line struck the tail rotor, tearing off the tail boom and causing a loss of control that sent the helicopter plunging to the ground, the Transportation Accident Investigation Commission (TAIC) of New Zealand says.

The pilot — the only person in the helicopter — was killed in the Feb. 14, 2017, crash in the southeastern suburbs of Christchurch, and the helicopter was destroyed, the TAIC said in its report, released in late June.

“There may not be a good awareness within the helicopter industry of the additional risks involved with underslung load operations, particularly with the use of monsoon buckets [underslung buckets used in fighting wildfires] during firefighting operations,” the report said.

The report said that video from a recorder mounted beneath the helicopter showed that an object — presumably a window, which had detached from the left rear sliding door — fell from the helicopter just before the monsoon bucket rose toward the tail rotor.

The report said that the TAIC determined that the door configuration was prohibited, “and therefore, the helicopter was being flown outside the manufacturer’s approved limits.”

In addition, the report said that the monsoon bucket likely flew toward the tail rotor “due to a combination of forward airspeed and turbulence.” As the pilot slowed the helicopter, “in response to losing the window,” the tail rotor dipped and contacted the suspension line.

Wildfire in the Hills

The firefighting effort began after wildfires broke out in the Port Hills near the southeastern suburbs of Christchurch on Feb. 13, 2017. The National Rural Fire Authority, which was in charge of the effort, contracted with area helicopter companies for a survey of the fire and to evacuate people from the affected area. The accident pilot — flying the accident helicopter, operated by Way To Go Heliservices — was among the participants.

Around 0540 local time the next day, the pilot flew the same helicopter from Rangiora back to the firefighting operations, which included more helicopters and pilots than the day before, the report said, adding that the firefighting supervisor designated the accident pilot as the lead pilot for three helicopters in his sector. The pilot briefed his colleagues and they agreed on the circuit pattern to be flown between the dipping ponds, where their buckets were refilled, and the water drop points.

The group had a break for lunch and refueling and then resumed their flights. Around 1405, several pilots heard “an abbreviated Mayday call … but it was not clear on which radio frequency the call had been made,” the report said. In a subsequent roll call of all participating firefighting aircraft, the pilot did not respond, and another pilot saw the helicopter’s wreckage in a gully east of Sugarloaf peak, near the center of the pilots’ flight circuits.

The commercial pilot had about 2,350 flight hours, including 500 in AS350s and 80 hours of underslung-load flying. He had begun helicopter flight training in 1998 and earned a commercial pilot license in 2002. In 2008, he was hired by the operator as a contract pilot and ground crewmember; he left in 2009 but returned in 2013 as a full-time pilot. He held a B Category instructor rating and a Grade 2 agricultural rating, was a quality assurance manager and training manager for the operator, and trained fire service personnel on how to work with firefighting helicopters.

Post-accident tests found what the report said were trace amounts of cannabis in the pilot’s blood and urine; the report also said that interviews with his associates indicated that he was an occasional user who had smoked marijuana while off duty two days before the accident. The report quoted a forensic toxicologist as saying the pilot was “unlikely” to have been under the influence of the drug at the time of the accident.

“However,” the report added, “as pilots may not know when they will be next required for duty, and the short- and long-term effects of cannabis use are variable, the use of cannabis at any time poses a serious risk to aviation safety. While not causal, substance use is part of the circumstances of this accident that the commission believes has significant implications for transport safety.”

The accident pilot, flying the accident helicopter with an underslung monsoon bucket, was involved in a previous incident while fighting a January 2015 wildfire in Canterbury, the region of New Zealand that includes Christchurch, the report said. The window panel from the left rear sliding door fell from the helicopter during a firefighting flight, and the pilot explained the event to the fire officer in charge that “it had happened because he had been flying too fast,” the report said. The incident was recorded and the firefighting pilots were cautioned the next day, but there was no investigation and the New Zealand Civil Aviation Authority (CAA) was not notified, as required, the report added. After that incident, the pilot logged 75.5 hours of flight in underslung load operations.

The operator, Way To Go Heliservices, was certified for commercial and charter operations and had been conducting commercial flights in the area since 2009 using several helicopter types, the report said.

In September 2016, the National Rural Fire Authority issued the company an interim certificate of compliance, good for 36 months or until it passed the authority’s formal audit. At the time of the accident, the audit had not been conducted.

The helicopter was manufactured in 1980 and had accumulated 9,127 hours in operation. An annual airworthiness review was completed Feb. 1, 2017, and the most recent scheduled maintenance was a 150-hour/annual airframe inspection, on Feb. 8.

The helicopter, which the pilot flew from the right seat, had been modified to accommodate the performance of underslung-load tasks with a seat position offset to the right of the normal position to allow for a better downward view. In addition, a window in the floor enabled the pilot to see the underslung load, and an extended collective lever ensured full control when the seat was in the offset position.

For firefighting, the doors on the left side of the helicopter were closed and those on the right side had been removed — a supplement to the AS350 BA flight manual said this configuration was prohibited. However, the report said the operator told accident investigators that the supplement was “ambiguous” on this point and that it was “not aware that the configuration was prohibited.”

Later variants of the AS350 were approved for flight with this door configuration, but only with airspeeds of 110 kt or less. The report said that Airbus Helicopters had told accident investigators that the speed limit was designed to prevent differences in air pressure from applying excessive force to some parts of the cabin.

The bucket manufacturer “did not state any airspeed limitations but said feedback from operators was that an empty bucket flew well at speeds up to 100 knots,” the report said, adding that the flight manual supplement for the hook said the airspeed limit when the bucket was loaded was 80 kt and that the pilot was responsible for determining the speed limit, “according to the load and sling length.”

The pilot filled the bucket by lowering it into a dipping pond; alternatively, the helicopter could be landed and the bucket could be filled from hoses.

The report said that because the flight manual in the helicopter lacked information on the Cloudburst 1000 and the operator could not provide its specifications, the pilots lacked ready access to information needed to calculate the operating weight.

Winds at the time of the accident varied from 264 degrees to 279 degrees at 20 to 29 kt, and other pilots in the firefighting circuit around Sugarloaf noted that there had been light turbulence “but it had not been a concern to them,” the report said, adding, however, that the pilot of a Kawasaki BK117 who responded to the accident told investigators that the winds had made flying “a bit of a struggle.”

The helicopter was equipped with a digital video camera, which was mounted beneath the forward fuselage, facing the monsoon bucket, and enabled investigators to compare the bucket’s behavior during a typical flight with its behavior during the accident flight.

In this case, the video indicated normal operations during the accident flight. The recording also showed that the helicopter’s ground speed before the accident was between 80 and 90 kt. After the helicopter passed over a rocky ridge, “the video recording showed slight transient movements in pitch and roll,” the report said. “A vibration went through the monsoon bucket and the strop, as had happened on previous passes over the ridge, and the tension in the suspension line relaxed. This time, the bucket rose quickly until it went out of view of the camera. …

“When the bucket moved out of camera view, the frame of the video recording in relation to the landing gear reference points changed. … This was most likely the result of rearward pressure on the camera because of an increase in airspeed. …

“It was very likely that these were all signs of turbulence and wind shear.” 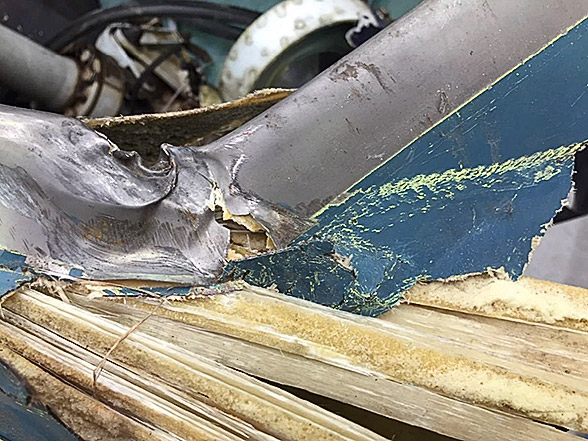 An analysis by the French Bureau d’Enquêtes et d’Analyses of the video, which included sound, noted that at this point, after an increase in pitch attitude, two loud sounds were heard, and then the background noise, which matched the frequency of the tail rotor, stopped.

“It is virtually certain that the second loud sound and the high frequency airframe vibration occurred when the monsoon bucket and the tail rotor made contact,” the report said. “The tail rotor blades were largely destroyed by this contact.” The report added that two objects — one of them “virtually certain” to have been the window panel and the other unidentified but possibly a bird — appeared briefly below the helicopter, and four seconds later, the vertical stabilizer fell to the ground.

The recording also showed that the bucket’s suspension lines had contacted the tail rotor; the resulting damage to the blades and the separation of the vertical stabilizer caused the loss of control that preceded the crash, the report said.

The investigation identified two safety issues, including the poor awareness of risks associated with underslung load operations and the fact that the operator “did not have adequate systems available for the pilot to determine the actual all-up weight and balance of the helicopter for the firefighting operation, or to ensure that incidents such as the previous loss of a window were recorded, notified to the CAA and investigated.” That second issue stemmed from the pilot’s inability to estimate the weight of the 1,000-L bucket and its contents.

The report noted that video from the helicopter’s recorder showed that the pilot filled the bucket to capacity on every trip to the dipping pond and that he had no reliable method of taking on only enough water to meet the hook’s 750-kg load limit.

“A line had been painted inside the bucket, but it had faded,” the report said. “The line was not visible on the video recording and it is unlikely that the pilot could see it clearly. Although the pilot had the option of subsequently releasing some water by briefly opening the bucket valve, video evidence showed that it was virtually certain that the initial part of each circuit began with the bucket weight exceeding the hook load limit.”

That the bucket’s capacity exceeded the load limit “ought to have been recognized as a risk” and action should have been taken to address it, the report said

As the investigation progressed, the TAIC issued several safety recommendations, including:

Both the CAA and the operator responded that the recommendations had been implemented or that the implementation was in progress.