An A109E pilot failed to see an unlighted crane shrouded in fog before his helicopter struck it, the AAIB says. 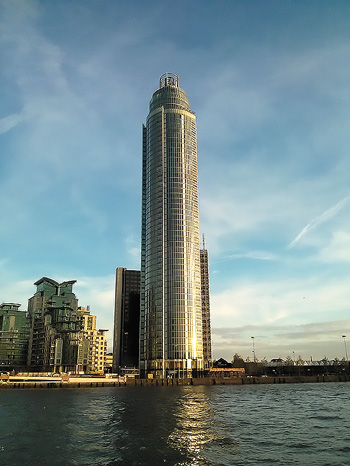 The pilot of an Agusta A109E, intent on landing at the London Heliport despite deteriorating weather, turned his helicopter onto a collision course with an unlighted crane that he did not see in time to avoid, the U.K. Air Accidents Investigation Branch (AAIB) says.

The helicopter struck the crane, which was attached to a building under construction about 700 ft above mean sea level (MSL), and crashed onto a street near Vauxhall Bridge, where it burst into flames at 0820 local time on Jan. 13, 2013, killing the pilot — the only person in the helicopter — and a pedestrian.

In its final report on the accident, the AAIB cited as causal factors the pilot’s decision to turn — noting that he was “probably unaware of the helicopter’s proximity to the building at the beginning of the turn” — and the fact that he either did not see the crane or that he saw it “too late to take effective action.” When it struck the crane, the helicopter was about 105 ft (32 m) from the building, the report said.

A contributing factor was the pilot’s continuation of the flight “with his intention to land at the London Heliport despite being unable to remain clear of cloud,” the report said.

The pilot’s workday had begun at 0630, when he arrived at Redhill Aerodrome to prepare for a planned flight to Elstree Aerodrome, where he was to pick up a client and transport him and a second passenger to the north of England.

About 0649, the pilot talked by phone with another pilot employed by a different operator, expressing concern about weather conditions at Elstree and saying that he had decided to cancel the flight, even though he felt pressure to proceed. The accident report said that a third pilot told investigators that the accident pilot had called him at 0706, commented on reports of fog at Elstree and said he “was going to fly overhead to see for himself.”

The client called at 0718, also to discuss the weather, and said that he would drive to Elstree and call the pilot to report on conditions there.

After departing from Redhill at 0735, the pilot contacted Thames Radar, received a special visual flight rules (VFR) clearance to transition the London Control Zone (CTR) by way of the London neighborhood of Battersea and proceeded, first at 970 ft MSL and later at 1,470 ft. At 0748, the pilot told air traffic control (ATC) that he had cleared the CTR and was “trying to find a hole” in the clouds to enable a descent, the report said. He flew the helicopter past Elstree, descending as low as 870 ft before he began a climb and turned right to fly southeast toward central London.

At 0751, ATC broadcast weather information for London City airport, which reported visibility of 700 m (less than half a mile), freezing fog and broken clouds with a base 100 ft above ground level. Thirty seconds later, the pilot told ATC he wanted to return to Redhill, and a controller approved the request. About the same time, the pilot texted the client that weather conditions prevented him from landing at Elstree and that he was heading back to Redhill. He sent a similar text to the operator at 0755. A final text, from the operator to the pilot at 0755, was never read.

At 0756, about one minute after receiving a text from the client that said Battersea (the London Heliport) was open, the pilot asked ATC for confirmation.

“This exchange ended at 0759:22 … [when the helicopter] was approximately 250 m [902 ft] southwest of Vauxhall Bridge,” the report said. “The final two recorded radar positions show a turn to the right at 770 ft [MSL], initiated abeam a building development at St. George Wharf, approximately 275 m [886 ft] from the southeast end of Vauxhall Bridge. The helicopter struck a crane attached to the building. The final recorded radar position was at 0759:24 … at an altitude of 770 ft.”

The controller who issued the clearance told accident investigators that because clouds at Heathrow and London City Airport were reported as broken and because the pilot had said that he was in visual meteorological conditions (VMC) above the clouds, he believed that the pilot could see the surface. Similarly, when the pilot said that he could see Vauxhall and requested helicopter route H4, a route that follows the Thames River, the controller assumed that the pilot was in VMC.

However, one witness said that, when he saw the helicopter at 0755, it seemed to be “flying actually in the low cloud.” Another witness told investigators that the “top half of the building [where the crane was located] was entirely obscured by cloud.” A third witness, on the ground near Vauxhall Bridge, said that the helicopter flew out of clouds as it approached, the report said, adding, “He reported that the cloud was ‘swirling around’ and, although the main body of the building remained clear of cloud, the top of the building was ‘in and out of the mist.’”

The witness said he did not observe the accident, but 10 to 20 seconds after he heard the sounds of the impact, “the top of the building was visible,” the report said.

The 50-year-old pilot held an air transport pilot (ATP) license with an instrument rating and had accumulated 10,234 flight hours, including 9,716 hours in rotorcraft and 30 hours in the 90 days before the accident.

The accident helicopter was manufactured in 1998. Both engines and the airframe had accumulated 2,305 flight hours. Records indicated the helicopter had no outstanding maintenance issues.

It was equipped with two global positioning system (GPS) units, each of which had a moving map display. Both units provided information about terrain and obstacles, and one also was capable — if equipped with a valid database — of providing obstacle warning information. Investigators said that both GPS units were destroyed in the post-accident fire and they could not determine whether the terrain and obstacle database revisions were current. The operator said that it routinely updated the database in March of each year, and because it had acquired the helicopter in May 2012, an update had not been performed.

Weather conditions at the time of the accident included temperatures “well below freezing,” cloud bases between 100 ft and 400 ft above ground level (AGL), visibility below 4,000 m (2.5 mi) and areas of freezing fog. Freezing fog was in the forecast for Redhill, Elstree and London Heliport until 1000; the forecast also called for isolated areas of freezing fog in the area of the planned flight with visibility of 200 m (656 ft). In some areas, however, the cloud base was forecast to be at the surface.

A notice to airmen (NOTAM) in effect at the time of the accident told pilots about the crane — “an obstacle … affecting both instrument and visual traffic [and] aerodrome and en route traffic.” The NOTAM told pilots that the crane, which extended to 770 ft and was lighted at night, would be in place from Jan. 7 until March 15, 2013.

“The operator’s Operations Manual required NOTAMs to be provided to crews and appropriate NOTAMs and current charts to be carried on each flight,” the report said. “NOTAM information can be accessed from the AIS [aeronautical information services] website, but the last time the pilot logged into his personal account was January 2010. However, if a pilot checks NOTAMs using a third-party provider, only the activity of the third party is visible to the system. The operator’s pilot brief for the flight did not contain NOTAM information, and the pilot’s awareness of relevant NOTAMs prior to the accident could not be confirmed.”

The report noted that the U.K. Aeronautical Information Publication for the London Heliport — located in a Class A Aerodrome Traffic Zone that can be accessed only by pilots who have obtained prior permission and a special VFR clearance — tells pilots that “the skyline has changed due to continuing recent development of buildings along the riverside within the heliport circuit.”

St. George Wharf, where the building and crane were located, is just outside the heliport’s airport traffic zone and “does not impinge upon its takeoff and climb surfaces,” the report said. The heliport operator emailed the U.K. Civil Aviation Authority (CAA) Aerodrome Standards Department (now the Aerodrome and Air Traffic Standards Division) in 2008 and 2009, requesting clarification on protecting takeoff and climb surfaces and suggesting that development at the wharf might interfere with standard operating altitudes on route H4. There was no indication of whether the questions were resolved, the report said.

The helicopter did not have — and was not required to have — a flight data recorder or a cockpit voice recorder, but accident investigators used radar information, radio transmissions and other recorded data sources to aid their work.

Radar at London Heathrow Airport, 12 nm (22 km) west of the heliport, recorded the helicopter’s position and altitude every four seconds. The helicopter manufacturer’s review of the data determined that, because a right turn along the Thames was too tight to have been flown with the autopilot and a 200-ft descent was too rapid, the aircraft was being flown manually.

“The pilot last read and sent text messages approximately four minutes before the collision with the crane,” the report said. “He was using the radio to talk to ATC until a few seconds before impact. …

“The pilot was cleared by ATC to contact London Heliport, which would have required a change of radio frequency. His response to this transmission ended at 0759:22, … two seconds before the last recorded radar position. It is possible therefore, that the pilot was distracted by the act of changing frequency as he entered the turn towards the building.”

The report included 10 safety recommendations, including several focusing on obstacle reporting. Among them were recommendations that the CAA require air navigation service providers to evaluate the effects of obstacles on operational procedures on VFR flights; that the Department for Transport implement a reporting requirement for newly permitted developments; and that the CAA be notified of developments being planned that would include an obstacle, of obstacles that have not previously been noted and of previously noted obstacles that no longer exist.

The CAA should be granted an opportunity to assess “the potential implications of new en route obstacles for airspace arrangements and procedures” before permission is granted for the associated developments, the report said.

Other recommendations said the CAA and the European Aviation Safety Agency should determine whether additional safety benefits would be achieved by requiring the use of helicopter terrain awareness and warning systems.

This article is based on U.K. Air Accidents Investigation Branch Aircraft Accident Report 3/2014, “Report on the Accident to Agusta A109E, G-CRST, Near Vauxhall Bridge, Central London, on 16 January 2013.”