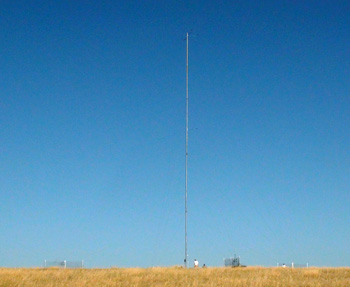 Towers equipped with sensors to measure winds for power-generation feasibility studies can put at risk pilots and aircraft operating at low altitudes, especially during aerial application of crop-protection chemicals, seeds and fertilizers.

Meteorological evaluation towers (METs), erected temporarily to measure winds for electric power-generation feasibility studies in the United States, in recent years have become common in some areas. After a number of accidents, the National Transportation Safety Board (NTSB) and the agricultural flying industry advocated changes to the current federal level of aviation safety oversight — which ultimately resulted in requests for voluntary measures by MET users — and appealed to state officials to address the concerns.

The NTSB said earlier in 2013, “Currently, it is unknown how many METs are erected in the United States.”

The first of three accident reports selected as examples by the NTSB reflects key issues. On Jan. 10, 2011, at 1057 local time, a pilot with a commercial pilot certificate and over 26,000 total flight hours in airplanes flew a Rockwell International S-2R Thrush Commander — a single-engine, turboprop airplane designed for aerial application — directly into an unmarked 198-ft (60-m) MET while performing a routine seeding operation on Webb Tract Island fields in Oakley, California. Visual meteorological conditions (VMC) with 10 mi (16 km) visibility were reported.

The pilot flew over the field, then descended to begin the seeding. Witnesses said he made no observed evasive maneuvers to avoid the unpainted metal tower and its guy wires, and investigators concluded that “his ability to detect it [the tower] visually was extremely limited,” and he never saw it. The aircraft crashed into the ground, killing the pilot; the airplane was substantially damaged.

In its final accident report, the NTSB concluded that the probable cause was “an in-flight collision with an unmarked [MET] during an aerial application flight, due to the pilot’s failure to see and avoid the obstacle” and that “contributing to the accident was the lack of visual conspicuity of the MET and the lack of information available to the pilot about the MET before the flight.”

The report also noted that “because many METs … are just below the 200-ft [61-m] threshold at which U.S. Federal Aviation Administration [FAA] regulations would require the applicant to notify the FAA of the MET and to provide a lighting and marking plan for FAA assessment, many METs are unmarked, unlighted and not referenced in any FAA notices or publications for pilots.”

Two similar fatal accidents occurred earlier. On May 19, 2005, at 0944 local time, an Air Tractor AT-602 (a single-turboprop agricultural airplane) collided with a 197-ft (60-m) unmarked and unlighted MET 15 days after the tower had been erected in Ralls, Texas. This crash involved an experienced pilot with 21,000 flight hours, performing a flight maneuver after a second aerial application (herbicide spraying) on an area of trees. Part of the right wing separated in the collision and was found adjacent to the base of the tower; the top 3 ft (1 m) of the tower were severed. The plane crashed and burned, killing the pilot and destroying the airplane. Visibility at the time, as reported by a nearby weather station, was 10 mi (16 km). The probable cause was “the pilot’s failure to maintain clearance from the antenna tower” and contributing factors were “the recency of the tower’s construction and the lack of obstruction lights on the tower.”

The third accident — involving a personal, non-agricultural flight — occurred Dec. 15, 2003, at 1416 local time, when an Erickson (Glasair)/SHA Glasair TD, a single-engine homebuilt airplane, collided with an MET near Vansycle, Oregon, in VMC with 10-mi visibility. The pilot held an airline transport pilot certificate with over 11,000 total flight hours (determined by investigators). Both he and a passenger were killed. The 164-ft (50-m) anemometer (an instrument for measuring wind velocity) tower they struck was sited among a field of wind turbines. The probable cause was “the pilot’s failure to maintain adequate clearance with the anemometer pole/wires during low altitude flight” and the contributing factors were “the pole and the pilot’s low altitude flight.”

To better understand and predict the weather, meteorologists have for years probed the atmosphere above the ground. Radiosondes — balloon-borne instrument packages — are regularly released twice a day from hundreds of sites around the world and often rise to over 100,000 ft. Closer to the ground, towers are often equipped with instrumentation to collect data from the low-altitude atmosphere, which meteorologists call the “boundary layer.” Such information is critical in producing more accurate forecasts for the aviation industry. But most of these towers are relatively low compared with METs and pose no significant hazard to aircraft.

METs, however, are a specialized, derivative version of such towers. As the demand for renewable, natural energy sources has increased, designers and engineers at many energy companies have turned to groups of wind-driven turbine generators for producing electricity. But to be practically, environmentally and economically feasible, they have to be installed where there is a fairly constant wind.

To test possible sites for these wind farms, energy companies first erect METs. These towers are equipped with anemometers as well as vanes to determine wind direction. The instruments are located at various heights on the tower. The towers themselves are assembled quickly and are usually left up for a year, sometimes several years. This provides the long-term wind data necessary to make economically driven decisions.

Why do these towers have to be so high — often 200 ft or more? Large wind turbines are massive. Blades can be over 100 ft (30 m) in length and sit on a supporting tower, which itself is often over 200 ft high. The entire wind turbine can easily rise 300 to 400 ft (91 to 122 m). People in the wind-energy business talk about winds at “hub height,” the height at which the blades connect to the main structure.

Although typical METs have substantial mass, they can be erected in a matter of hours. Some companies specialize in their construction and installation.

Tubular, galvanized metal types have thin poles with the wind-sensing equipment mounted at predetermined heights. They are assembled at ground level, then tilted upright and supported by a system of guy wires. Lattice-type METs are more elaborate. Their prefabricated sections are connected and lifted into place. Often, a nearly 200-ft tower can appear from one day to the next in a previously vacant field.

The major risk factor is that the dull metal used for the tower, and the supporting guy wires, are difficult to see from the air. The tower and wires easily blend into the surroundings, making them a hazard to pilots of low-flying aircraft.

At particular risk, as evidenced by two of the fatal accidents cited, are pilots performing aerial application. By the nature of their tasks, these pilots must fly at low altitudes, often within 10 ft (3 m) of the ground. Historically, the typical wind farm sites have been in rural areas, far from locations where they would create obstructions for aviation. But this is no longer the case. For this reason, the National Agricultural Aviation Association (NAAA) has been in the forefront of calling for action to mitigate the risks of unmarked, unregistered and unexpected towers.

Even prior to the 2011 accident, the NAAA had noted that 25 percent of fatal accidents (in which 24 pilots were killed) during agricultural flying for aerial application were due to collisions with towers and/or their guy wires. As for the METs, NAAA Executive Director Andrew Moore said, “They go up overnight — literally overnight. And there’s no central database to log their existence.”

U.S. wind farming is practiced in many regions but most notably in the Plains states. The open terrain and steady winds are ideal for the wind turbines. Texas leads the nation in wind-generated electricity. Along the West Coast, California has numerous sites, and is second in wind turbine numbers. The Midwest and the Northeast also have sites. Only the South and Southeast remain untouched so far. Many countries around the world also have turned to wind-energy production, and they have encountered the MET risks to aviation.

After the Oakley accident, the NTSB sent out a special safety alert in March 2011 warning pilots about METs.1 It described the problem and urged pilots to “be vigilant” when flying where these towers might be located. Just five days prior to the Oakley accident, the FAA had issued a request for public comments about voluntary marking of such towers. The FAA requires that any tower over 200 ft be clearly marked and lighted and be listed on a publicly accessible federal registry.

As noted, heights of many METs fall just under the FAA’s 200-ft threshold. Applications for city, county or state construction permits — such as for the one issued by Contra Costa County and applicable for the Oakley MET erection in April 2009 — explicitly state that the tower will be just short of the limit for requiring federal assessment of obstruction marking, lighting and registration.

The policy decision by the FAA in June 2011 was to recommend voluntary marking of towers under 200 ft. How would the FAA like MET users to increase the level of safety? First, paint the towers with alternating aviation orange and white stripes from top to bottom. Also, install one high-visibility sleeve on each guy wire and install eight high-conspicuity, spherical marker balls on the wires.

The FAA determined that requiring lighting on such towers would be unreasonably difficult because of the often-remote locations. The agency also opted not to require national registration of such towers, although officials acknowledged that local or state governments can register them. In fact, 10 states (California, Idaho, Wyoming, North Dakota, South Dakota, Nebraska, Kansas, Missouri, Michigan and Montana) have issued guidelines or enacted laws dealing specifically with towers ranging in height from 50 ft (15 m) to 200 ft, according to NTSB research. Some states, such as South Dakota and California, also require the tower to be clearly marked. Others, such as Wyoming, Nebraska and Montana, require marking and registration.

In May 2013, the NTSB issued another safety recommendation letter,2 which included recommendations to a number of the stakeholders in this issue. The agency recommended that the FAA require all METs to be marked and create “a publicly accessible national database for the required registration of all meteorological evaluation towers.” The NTSB further recommended that other federal agencies (the Departments of Interior, Defense and Agriculture) involved in approving the installation of METs instruct the applicants in standard aviation marking procedures.

The NTSB also recommended that the American Wind Energy Association in its Wind Energy Siting Handbook acknowledge the aviation hazard that the METs pose and encourage voluntary marking. Finally, the NTSB recommended that the 46 states and the District of Columbia that do not currently require METs to be registered in a directory do so, and that all states require marking these towers.

The University of Nebraska Lincoln Extension program and the Nebraska Aviation Trades Association have produced and posted on YouTube two videos highlighting the dangers of unmarked METs, including footage shot from flight.3 The videos show the benefits of properly marking such towers.