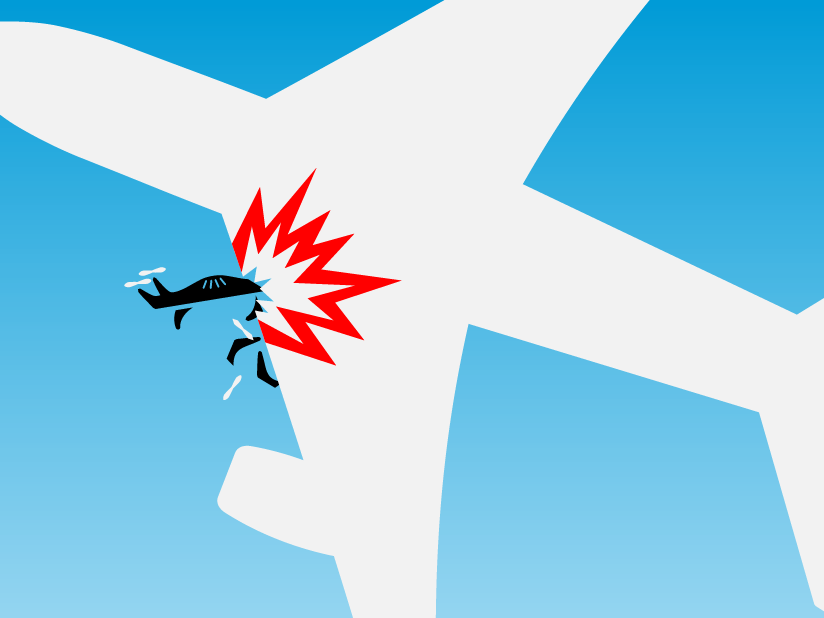 Drones — with their motors, batteries and other rigid components — can cause more damage than birds of the same weight when they collide with manned aircraft, according to a study conducted for the U.S. Federal Aviation Administration (FAA) by a team of university researchers.1

The FAA said the findings of the Alliance for System Safety of Unmanned Aircraft Systems (UAS) Through Research Excellence (ASSURE)2 would be used in developing risk-mitigation requirements for drones.

“While the effects of bird impacts on airplanes are well documented, little is known about the effects of more rigid and higher mass sUAS [small UAS] on aircraft structures and propulsion systems,” said researcher Marty Rogers of Mississippi State University, director of ASSURE. “The results of this work are critical to the safety of commercial air travel here in the United States and around the world.”

In a report summary, ASSURE said that its researchers “set out to answer the question of what happens when, not if, there is a collision between a sUAS and an airplane.”

The release in November of the report (dated July 2017) on its study followed two recent midair collisions between drones and commercial airplanes and a third collision between a drone and a U.S. Army Sikorsky UH-60 Black Hawk (“Colliding Interests,” ASW, 10/17). No one was hurt in the collisions; minor damage was reported to all three manned aircraft.

These three collisions, and 14 others that occurred between 1997 and 2017, are listed in the Aviation Safety Network’s Drone Database.3 Most of the manned aircraft received little or no damage; however, a Grob G109B glider was destroyed and two people were killed in a 1997 collision, and two airplanes in later collisions received substantial damage — a Stolp SA750 in 2010 and a U.S. Air Force Lockheed C-130 Hercules in 2011.

The study focused first on identifying the most likely scenarios for a sUAS collision with a manned aircraft and then on selecting the aircraft to be used in the study, “based on these impact scenarios and their likely exposure to one another.”

The simulations were designed to determine the potential results of impacts of 2.7-lb (1.2-kg) and 4.0-lb (1.8-kg) drones with a narrow body commercial transport jet resembling a Boeing 737 or an Airbus A320, which constitute about 70 percent of the commercial fleet in the United States, and a business jet resembling a Learjet 30/40/50.

The drones chosen for the simulations were a small quadcopter from the DJI Phantom family and a light fixed-wing drone, a Precision Hawk Lancaster, that were “representative of the most likely threats to manned aircraft,” ASSURE said. “Idealized birds” of similar 2.7-lb and 4.0-lb masses were selected for comparison.

“Conducting this study through full-scale physical tests would not have been possible from a cost and time perspective due to the immense complexity of the task. On the other hand, simulation enabled us to study over 180 impact scenarios in a 12-month period. To ensure results accurately predict the actual physical behavior of collisions, we have spent a lot of time developing, verifying and validating detailed models of manned and unmanned aircraft. Once the models are validated, we can use them in the future to investigate other impact scenarios.”

The researchers said that varying amounts of damage to airframes and engines occurred in all of the simulated collisions and that they “confirmed that energy (projectile mass and velocity) and the stiffness of the sUAS are the primary drivers of impact damage.” Other factors include the design features of the drone and the impact dynamics, they said.

Researchers assumed that “the most probable high velocity impact scenario was either at landing/takeoff or at holding flight phases,” the report said. “For these cases, and considering the categories of aircraft being studied in this report, the maximum flight speed is limited to 200 KIAS [knots indicated airspeed] … , which at 2,500 ft is approximately 208 kt. Considering a frontal impact between the UAS and the aircraft to be a worst-case scenario, an impact velocity can be established by adding the relative speeds of both bodies. Therefore, and considering the specifications of the two UAS … an impact velocity of 250 kt … was defined for all the baseline airborne collision studies.”

Results of the aircrafts’ simulated collisions with UAS and birds showed that “the UAS impacts … were associated with greater damage levels than equivalent bird strikes,” the report said.

“The structural damage severity levels ranged from no damage to failure of the primary structure and penetration of the drone into the airframe,” the FAA said.

“Corresponding to what was observed in component-level physical testing, the simulations predicted that most of the damage is produced by relatively dense and stiffer UAS parts (motors, camera, etc.),” the report said.

However, the FAA added, the research did not probe the risk to the flight that would result from the damage.

Overall, researchers concluded that drone manufacturers “should adopt ‘detect and avoid’ or ‘geo-fencing’ capabilities to reduce the probability of collisions with other aircraft,” the FAA said.

The agency said that further research is planned to assess the results of an engine ingestion of a small drone, as well as simulated airborne collision studies involving helicopters and general aviation aircraft.

In addition to assessing the results of midair collisions, the study also conducted physical testing and simulations involving the lithium batteries that power small drones, concluding that high-speed impacts generally destroyed the batteries and, “therefore, in these cases, there was not an increased risk of fire due to a shorted battery,” the report summary said.

“However, during some of the low-speed impacts associated with landing and takeoff, the battery was not completely destroyed. In some of these simulations, the battery remained lodged in the airframe and there was potential for increased risk of battery fire.”

The researchers noted that the structural components of commercial aircraft are designed to withstand bird strikes to the empennage of birds that weigh up to 8 lb (4 kg) and to the windshield of birds weighing up to 4 lb (2 kg). Because of differences between drone components, which are stiff, and birds, which are composed mostly of water and are relatively soft, “bird strike certification regulations are not appropriate for unmanned aircraft,” the report summary said. “Additionally, regulators do not require and manufacturers do not design commercial and business aircraft to withstand collisions from other aircraft.”

Overall, the summary said that the findings show the importance of researching and regulating small drones in the crowded National Airspace System.

“While design features can decrease the severity of a drone impact, sUAS pilots and the public must be aware of and abide by regulations for safe sUAS operations,” the summary said. “It is critical that everything be done to keep these collisions from occurring through the safe separation of all aircraft, both manned and unmanned. The FAA will depend on the sUAS community to help develop the technology for proper detect-and-avoid so that these aircraft do not meet in flight.”

“The dangers from UAS that are operated unsafely in the national airspace are real — as we’ve seen in two recent UAS midair collisions,” Canoll said. “The findings … combined with previous data showing that near misses between UAS and manned aircraft are occurring more often, provide compelling evidence that we need to act before tragedy strikes.”

He noted that legislation passed by the U.S. Congress in 2012 barred the FAA from implementing new regulations for unmanned aircraft “that are operated as models or as a hobby.” That prohibition should be lifted to allow the FAA to implement safety regulations for all types of drone operations, Canoll said, adding that the study demonstrates the need to “apply proven safety regulations to hobbyists and help prevent future UAS-aircraft collisions that could hold dire consequences for the traveling and shipping public.”