What Happened to Crew Resource Management? 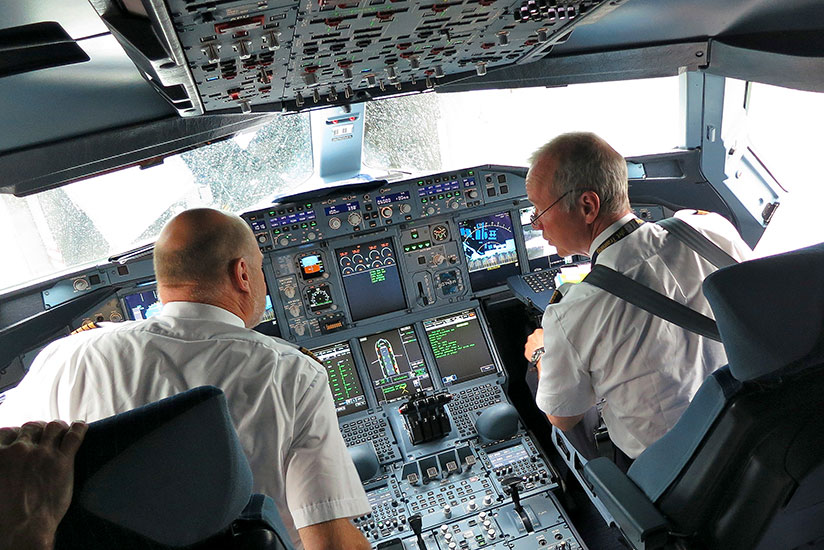 There was a time not so long ago when pilots spoke of crew resource management (CRM) frequently and often. Nowadays, the term CRM — and its traditional doctrine — has fallen out of favor and is being used to a lesser extent than ever before.

Today, in lieu of a dedicated class with formalized instruction, most CRM training is incorporated into a flight training syllabus. In that regard, it’s a small nuance buried in a much larger objective. For example, if the goal is to obtain a type rating or to complete recurrent training, somewhere in the syllabus sits a little box waiting to be checked called “CRM.” The efficacy of the CRM aspect of such training is critically dependent on the skills of the instructor, as well as his or her belief in the value of the material.

A 30-minute interval carved into a multi-day ground school training footprint does little to teach, improve, or reinforce CRM concepts, especially when the instructor fills the time by having students mindlessly watch an outdated presentation. Pilots who attend recurrent training in the same aircraft with the same training provider can relate. Once the instructor announces that it is time for CRM and clicks the start button on the computer — or presses play on a VHS player that’s been languishing since 1989 — the class groans as if on cue. There’s a high probability one of the “classics” will be shown. There is a higher probability that repeat attendees have seen the exact same presentation repeatedly. Even if they can’t recall the names they know the story: McDonnel-Douglas DC-8 runs out of fuel while holding near Portland, Oregon, and crashes (United Airlines Flight 173)1, Boeing 747 freighter collides with terrain near Kuala Lumpur, Malaysia, as a result of altitude confusion (Flying Tiger Line Flight 66)2 or a Lockheed L-1011 descends into the Florida Everglades while the crew is focused on a specious landing gear problem (Eastern Airlines Flight 401)3. Make no mistake, there’s value in each of these case studies; however, drawing out the salient points so that lessons can be applied to future operations requires a skilled CRM facilitator (not an instructor who grabs a coffee while students attend to their personal electronic devices at the expense of the curriculum).

Pilots in the industry for a decade or more have likely witnessed a change in how formalized CRM (defined here as an independent course outside of an aircraft training program or certification) is delivered. Over the past few years, in-person or classroom training has given way to electronic training, or e-learning. The simplest way to conduct e-learning is for the provider to transcribe the information that would be taught by a classroom instructor and make it available in a downloadable or on-demand format via the internet. This methodology allows the student to view the content when it’s most convenient and perhaps even multiple times. The downside is that information is delivered in a style reminiscent of a lecture, which studies show leads to poor long-term retention, especially when it comes to adult learners. Further, there’s no interaction with the instructor or other students, which is ironic, given that CRM is a team-based concept.

Another method of conducting e-learning is to use an instructor to “live stream” a class to participants who have logged on remotely. It’s a hybrid between attending an actual class and receiving content solely from a computer. Because an instructor delivers the presentation, the training institution schedules the course in advance. Much like a movie, students pick the date and time most convenient to them. And just like a movie, attendees can choose to watch (participate) or sleep through the show. Because of bandwidth and data lag issues, it’s common to conduct this sort of training with the camera mode disabled. Students hear the instructor but cannot see him. The reverse is also true — the instructor cannot see the students. Whether a student is in a quiet space concentrating on the material, working out at the gym or sitting on a tractor mowing the lawn cannot be determined; as long as there’s a Wi-Fi connection he or she is considered “in attendance.” There’s a potential for interaction but no guarantee. Again, the quality of the instructor is a major determinant of the outcome. Facilitated discussion can devolve into lecture if the instructor fails to capitalize on opportunities for deeper learning.

One question that must be asked is whether an e-learning format is appropriate to deliver CRM training. CRM originated in the airline industry, and United Airlines holds the distinction of having been the first to incorporate it in 1981. Early (first–generation) CRM was directed at individual behavior, most notably authoritarian captains who would single-handedly make decisions while ignoring, or failing to solicit, input from others. In some cases, such decision making was flawed. A complicit variable was that other crewmembers failed to challenge erroneous courses of action that sometimes culminated in an accident.

To gain insight into this behavior, it’s important to understand the historical culture of how airline pilots were trained and how co-pilots were expected to act. Ernest K. Gann described his experience of interacting with captains in the early days of commercial aviation in his book, Fate is the Hunter: A Pilot’s Memoir.

“Ross never relented in his instruction, which had the quality of ceaseless pounding, so that frequently at the end of a flight my brain seemed to hang limp between my ears, twisted and bruised. … Punishment was always quick and sure. An acid tongue-lashing, at which Ross was wonderfully adept, would be followed by a hard blow on my shoulder or whatever other part of my anatomy was convenient. The free-swinging blow served as a sort of punctuation mark to his verbal acrimony. To return such a blow even in jest was out of the question. You did not strike captains.”

Given the climate in the historical cockpit, it’s understandable, to a degree, why subordinates failed to challenge authority. Eventually, safety advocates opined that a safer way existed, so consultants were brought in to apply business managerial performance techniques to the airline paradigm.

The cornerstone of early CRM training was intensive introspection done publically in a seminar style format. Participants answered a battery of questions that ultimately defined where their management style landed on a managerial grid. The final solution revealed the extent to which a pilot was more concerned about people or process. Overall, the goal of the training was to modify individual behavior to an optimum blend of concern (that is, a person only concerned about process will run roughshod over others, whereas someone who ignores process in favor of people won’t get anything done.) In the end, the session modeled good behavior and discouraged undesirable leadership styles at the personal level.

By the late 1980s, several airlines had developed and were delivering CRM training. Although individual situational awareness was still a focal point, the greater objective shifted to that of the group dynamic (so much so that what was initially called cockpit resource management eventually became crew resource management.) Crew–related synergies like briefing and team building techniques began to be emphasized. In the 1990s, CRM was formally extended to other occupations (like mechanics and flight attendants) under the belief that the entire system plays a role in safety.

Another major development in this period was the initiation of the advanced qualification program (AQP) within the U.S. Federal Aviation Regulations (FARs) Part 121 air carrier world. Under AQP, CRM is embedded or “written in” to procedures and technical requirements so that a checkride must include CRM in order for crews to be successful.

Corporate operators flying under FARs Part 91 started to take note of what the airlines were doing and as a result began to request CRM instruction from their training providers. The big-brand Part 142 training schools like FlightSafety International offered open sessions — usually in conference rooms set up in hotels — consisting of initial (16 hours) and recurrent (8 hours) training delivered by an experienced facilitator. The syllabus included modules on leadership, situational awareness, communication, decision making, standard operating procedures (SOPs), stress and fatigue management, teamwork, and other human factors topics. Curriculum was built on interaction that included group discussion, case study analysis and hands-on exercises (most not specific to aviation but designed to illustrate psychological concepts) so a minimum number of participants was required to hold the class.

Throughout the 1990s and 2000s, CRM courses were popular and well attended. Many corporate operators requested that the training events be held on-site at their facilities. It was common for an entire flight department to stand down to complete initial CRM training with recurrent sessions occurring on an annual or biennial basis. Today, the requests for on-site training are dwindling.

One aspect that must be acknowledged in any CRM discussion is the enormous difference in interpersonal dynamics between corporate and airline flight departments. Pilots at large airlines can go an entire career and never fly with the same person twice. In an airline cockpit, the inexorable application of SOPs enables two people who have never flown together to conduct the job safely and efficiently. Still, personality problems exist. Theoretically at least, individuals who don’t get along can do their jobs and peacefully coexist for the duration of the flight. There’s solace in knowing that conflict can be eliminated just by telling the scheduling department to avoid putting certain pilots together. Unlike airlines that may have thousands of pilots, corporate flight departments can run the gamut from a couple of dozen pilots all the way down to two. Pilots in a small department may have to sit in a confined cockpit next to the same individual — like it or not — for the next 30 years. In this setting, the application of good CRM is not just an exercise in patience and humility for one leg but instead becomes the modus operandi for an entire career.

From the inception of CRM almost four decades ago, there have been detractors who have argued that the training is a form of “charm school” or psychobabble. The early methodology was indeed heavy on psychology and personality-focused. Subsequent evolutions have shifted the focus to the system at large and, more importantly, to error detection, trapping and mitigation. The threat and error management paradigm is a byproduct of CRM. The e-learning format or even learning CRM as the only student in the class does have benefits. But the communication aspect of CRM and the understanding of group dynamics must be addressed. The ability to monitor both the automation and the other pilot and to use the skills of inquiry, advocacy and assertion to speak up must be emphasized and practiced. Given that an entire generation has grown up using texting and electronic messaging as their primary form of communication — and as a result, has not developed social skills or human interaction etiquette to the degree of their predecessors — a new CRM problem may be looming on the horizon. Electronic learning certainly can teach the academic basics behind situational awareness, decision making and the like, but it’s no substitute for good old-fashioned face-to-face CRM to address concerns, solve specific problems and remind flight departments that aviation is a team sport.

Shannon Forrest previously was the CRM/human factors program manager for FlightSafety International and now is a line pilot and member of the incident/accident committee at JetBlue.

Editor’s Note: The views expressed are the author’s and do not necessarily reflect the views of Flight Safety Foundation.