Morrison worked as draftsman in the plant’s Research and Development Group, designing preliminary aircraft concepts, with a focus on cockpit design. It was at the Martin plant that Morrison met Richard Crane, another of the Foundation’s co-founders, and began a life-long collaboration and friendship.

In 1942, Morrison joined the U.S. Navy Bureau of Aeronautics Special Devices Division, led by Adm. Luis de Florez, an early champion of synthetic training devices to improve pilot training. There, Morrison was asked to lead the Cockpit Safety Program and Ideal Cockpit project. His investigations of aircraft incidents and accidents led to his discovery that the cause of many of the accidents – typically attributed to pilot error – was instead pilot disorientation due to poor cockpit ergonomics and bewildering analogue instrument displays. Another important factor was the lack of cockpit and instrument panel standards across different platforms.

Through rudimentary simulations, Morrison documented the human factors issues faced by pilots who had to rely on poorly arranged indicators and controls to determine the aircraft’s state. These discoveries, coupled with the realization that premium cockpit space needed to be reimagined, led him to advance the concept of a simplified cockpit.

Morrison designed and built flight deck and instrumentation prototypes that integrated the multitude of analogue displays scattered around the cockpit into a single digital instrument readout. His prototypes were standardized and simpler than those in use at the time – when, as he wrote in a letter, there could be 24 or more different dials “with their many tiny hands and hard-to-read numerals.” His original patent, granted in 1945, was hailed as a transformational and human-centric approach to cockpit design. 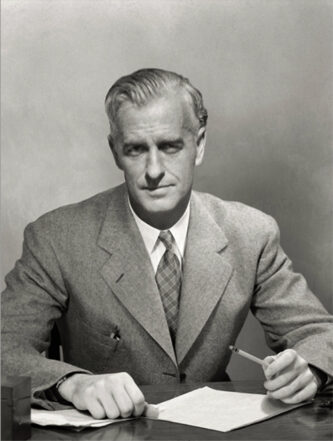 Morrison also worked at the Aero Medical Laboratory at Wright Field, where he gained an understanding of the link between flight deck complexity and safety. He discovered the interrelationships of flight deck design, instrumentation, flight crew size, and crew interaction complexities.  He was convinced that if postwar civil aviation was to safely grow and succeed, flight deck instrumentation needed to be simplified and important safety, crew resource management and design issues had to be addressed.

During the early 1940s, both Morrison and Crane were assigned to Dr. Eugene DuBois at the Washington offices of the Cornell University Crash Aviation Injury Research (AvCIR) project. Morrison designed and constructed prototypes of future simplified flight decks, and his concepts were accepted by the Navy for the F7 fighter aircraft flight deck.

As the war ended, funding for the crash injury research was reduced and DuBois was desperate to find new resources for the research to continue and asked Morrison for help.

Morrison talked to Crane about forming an independent nonprofit foundation to serve as a new home for the aviation crash injury research. He envisioned an independent organization free from the pressures of manufacturers and airlines that would allow him and Crane to pursue their projects, including research into simplified cockpit design and improved cockpit human factors. One of Morrison’s projects was researching the idea of a moving map display that would improve pilot navigation abilities and automatically determine aircraft position.

In 1945, Morrison, DuBois, Hugh DeHaven and Crane formed Flight Safety Foundation and served on its Board of Governors. Morrison also was the director of the Research Division. Initial financing came from the Friendship Fund, a philanthropic trust established by Crane’s grandfather, but it was not until 1959 that the transfer of AvCIR to the Foundation was completed.

The search for a director of the Foundation ended in 1948 with their selection of Jerome F. “Jerry” Lederer, who had taken an interest in AvCIR while he was director of the Civil Aviation Bureau, a precursor of the U.S. Federal Aviation Administration. Lederer had launched Aircraft Engineering for Safety (AES) in 1947 to share mechanical safety information among airlines and manufacturers.  AES merged into Flight Safety Foundation as a new division, with Gloria Heath as its director.

Morrison served on the Foundation’s Board of Governors in different capacities over the ensuing years.

At one point, he raised an emerging concern relating to pilot stress, fatigue and mental health, and he also encouraged the Foundation to research the effects of diet on pilot performance, including links between diet and fatigue, blood sugar levels, and hyperventilation.

Morrison and Crane continued their friendship and collaboration during the 1950s and 1960s, working on both aviation and non-aviation technologies. Morrison founded Davric Associates, which carried out research and development of numerous technologies, including industrial self-cleaning filters; distillation and filtration systems to convert ocean water to drinking water; filtration for cleaning automotive exhaust gases; and filtration to separate microorganisms and plankton from seawater. He was awarded multiple patents for these technologies.

Morrison also envisioned a low-cost, compact and light-weight safety and security alerting device for personal use in emergencies and was conducting research on signal transmissions methods until his death in 1968 at the age of 53.