Too Fatigued to Fly? 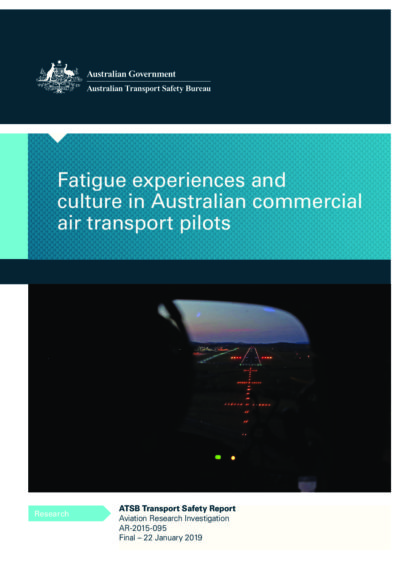 One-third of pilots surveyed by the Australian Transport Safety Bureau (ATSB) said they had removed themselves from duty because of fatigue at least once during the 12 months before they took the 2016 survey, the ATSB said in a report released Tuesday.

“When they did this, they reportedly felt it left a negative impression with management,” ATSB Chief Commissioner Greg Hood said.

The report, Fatigue Experiences and Culture in Australian Commercial Air Transport Pilots, said that more than half of the 625 pilots responding to the online survey between June and November of 2016 said they had gotten at least seven hours of sleep in the previous 24 hours; more than 60 percent said they had slept more than 14 hours during the 48 hours at the end of their most recent duty period.

Survey responses indicated that fatigue and fatigue-related issues were uncommon, although some pilots work in conditions that are conducive to fatigue.

“While small in number, some pilots did report operating in conditions consistent with thresholds that have been showed to be associated with impaired performance due to fatigue at the end of their last flight,” Hood said.

He noted that the survey found “a small but significant number of pilots, 10 percent and 17 percent, who reported obtaining less than five hours of sleep in the previous 24 hours or less than 12 hours in the previous 48 hours, respectively, at the end of their last flight. These sleep thresholds have been shown to be associated with impaired performance.”

High capacity regular public transport operations are required to transition to the new rules by Sept. 30; other operators face a March 26, 2020, deadline.

“The responsibility to manage the risk of fatigue lies with both pilots and operators,” Hood said. “Pilots need to use rest periods to get adequate sleep and remove themselves from duty if affected by fatigue, and operators need to have policies in place to manage fatigue and create a work culture where pilots and crew can report fatigue in a supportive environment.”