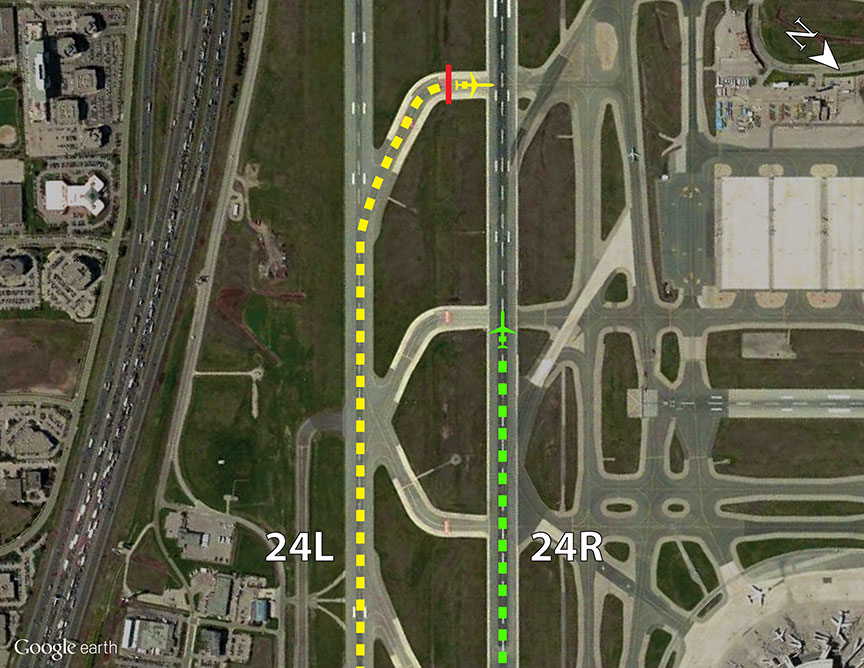 The Transportation Safety Board of Canada (TSB), citing 27 runway incursions in just over five years at Toronto Lester B. Pearson International Airport, has issued a series of recommendations to improve safety at two closely spaced parallel runways.

The four recommendations, issued last week, include one that calls for Nav Canada to alter its phraseology to ensure that safety-critical transmissions “are more compelling to flight crews in order for crews to take the safest course of action.”

Two recommendations are for Transport Canada and the U.S. Federal Aviation Administration to work with operators to develop standard operating procedures calling for crews to wait until after their landing aircraft clears all active runways to begin post-landing checks.

The fourth recommendation says that the Greater Toronto Airports Authority should change the taxiway layout at the airport’s South Complex to limit the risk of runway incursions between the parallel runways.

The TSB investigation found that all 27 incursions occurred on the inner runway (06L/24R), after airplanes had landed on the outer runway (06R/24L) and were on a rapid-exit taxiway between the runways. The rapid-exit taxiways have characteristics that differ from nearly all other major North American airports, the TSB said, adding that the differences mean that the hold lines “are not where crews are expecting to see them.”

The investigation also determined that, because of “hot spot” designations on airport charts, crews knew about the increased risk of runway incursions. Nevertheless, “that guidance did not bring crews’ attention to specific strategies to mitigate the risk of incursion,” the TSB said. “Instead, crews followed their standard operating procedures and initiated their post-landing actions immediately after exiting the runway, taking their attention away from other, more critical tasks such as identifying the hold line. The timing of those tasks distracted the crew at a point when limited time was available to recognize the visual cues requiring them to stop, and contributed to their overlooking those cues.”