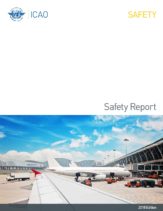 The report, released Wednesday, said that the five fatal accidents — a decrease from seven in 2016 — were associated with 50 fatalities. With 4.1 billion passengers traveling on scheduled commercial flights in 2017, the rate of 12.2 fatalities per billion passengers “represents the safest year ever on the record for aviation,” ICAO said.

The trend over the past 10 years has been toward reductions in numbers of both fatal accidents and fatalities, the report said.