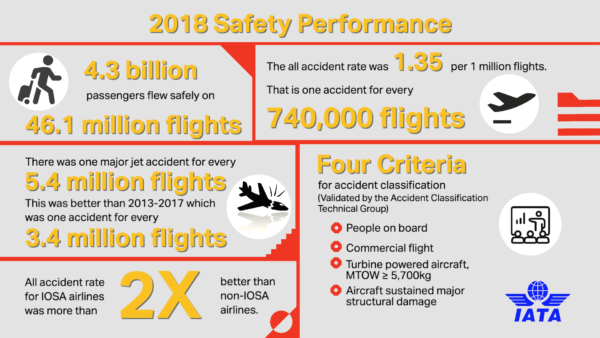 IATA Director General and CEO Alexandre de Juniac conceded that 2018 was “not the extraordinary year that 2017 was.”

Nevertheless, he noted that 4.3 billion passengers flew safely in 2018 on 46.1 million flights and that “flying is safe, and the data tell us that it is getting safer. For example, if safety in 2018 had remained at the same level as 2013, there would have been 109 accidents instead of 62, and there would have been 18 fatal accidents instead of the 11 that actually occurred.”

Commercial jet airliners were involved in 11 fatal accidents in 2018 with 523 on-board fatalities. In comparison, six accidents occurred in 2017 with 19 fatalities — a record low; in addition, one accident in 2017 killed 35 people on the ground. The average annual rate for 2013–2017 was 8.8 fatal accidents with 234 fatalities.