Flight tests are measuring the value of on-board sensors in detecting fatigue cracks. 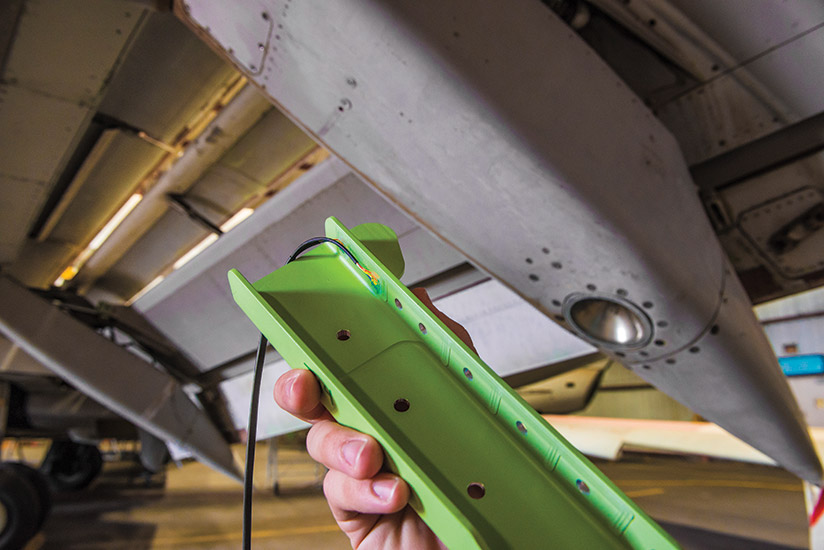 Onboard sensors are proving their effectiveness in monitoring the structural health of commercial airplanes, researchers say.

The testing process that is providing evidence of their success — conducted by Sandia National Laboratories’ Transportation, Safeguards and Surety Program, based in Albuquerque, New Mexico, U.S. — involves two separate programs in which Delta Air Lines and a non-U.S. airplane manufacturer (not publicly identified) have joined with Sandia researchers to install 100 sensors on nine commercial airplanes and to oversee the flight tests.

The goal of the testing process is to obtain certification for on-board usage, Sandia senior scientist Dennis Roach said, noting that the laboratory research phase of the program has been completed.

“Our activities are proving that the sensors work on particular applications and that it is safe and reliable to use these sensor systems for routine aircraft maintenance,” said Roach, who discussed the program in a telephone interview with ASW and a news release issued by Sandia Labs.

“We wanted to show that we could do as well as or better than the current requirements [for fatigue-crack detection],” he said. “And we’re finding fatigue cracks well before they reach the maximum crack length allowable.”

Sandia’s current testing process is the most recent step in a decade of research into structural health monitoring (SHM) of aircraft — a process that relies on nondestructive inspection (NDI) principles and “built-in sensors that automatically and remotely assess an aircraft’s structural condition in real time and signal the need for maintenance,” Sandia said.

By monitoring the sensors installed in the test airplanes, the Sandia test flights are designed to “accumulate successful flight history to show that the sensors can sustain the operating environment while providing the proper signals for flaw detection.”

Ultimately, SHM is intended to enable maintenance to be performed according to an aircraft’s actual condition rather than on a fixed schedule and with fixed inspection routines that might not be necessary, Roach said. A switch to SHM-enabled maintenance also would reduce aircraft down time, Sandia said.

Plans call for the researchers to deliver the results of laboratory and flight tests to the U.S. Federal Aviation Administration (FAA) this year for approval and certification. Once certified, the sensors would become available for specific applications throughout the airline industry.

Roach said that both the CVM and PZT sensors will be required to comply with the performance and reliability standards that apply to current maintenance inspections. The Delta program uses only CVM sensors; both types of devices are used in the program involving the aircraft manufacturer.

He added, “The SHM systems also help eliminate some of the concerns about human factors associated with manually deployed NDI. You have the sensor in place, you know it works, and it’s giving you a proper signal, whereas an inspector must manually orient the inspection probe properly each time, and there are always concerns about human vigilance when inspections become time consuming or tedious.”

Sandia said that because the sensors deliver assessments of “pass” or “fail,” their results cannot be misinterpreted. In hundreds of laboratory tests, the sensors always produced an accurate diagnosis.

Before the in-flight tests, the sensors were tested in the laboratory for crack-detection. The laboratory work requires Sandia engineer Tom Rice to “grow” cracks that resemble the fatigue cracks found in aircraft surfaces.

“For example,” Sandia said, describing the lab techniques, “he places a pale green wing box fitting on a load frame that mimics the stress conditions the part would experience on an aircraft. After about four hours of accelerated fatigue cycles, a crack begins to show.”

Rice added, “We literally have to grow the crack enough to where it stays open (without the load on it), so our sensors can detect the crack when the aircraft is in an unloaded state.”

If the results of the test program verify the sensors’ effectiveness in monitoring the airplanes’ structural health, Sandia researchers said, they hope the use of sensors will expand. The benefits would include enhanced safety as well as savings in time and money, especially if the sensors are being mounted in areas that are difficult to access, Sandia said.

Mounted on-board sensors would allow the mechanics to acquire sensor data without removing parts to gain access to the sensors, Roach said, noting that parts removal increases the possibility of structural damage.

Roach and other researchers say their goal is for the need for maintenance to be determined by SHM and the real-time condition of an airplane. SHM could detect problems as they occur, occasionally in advance of routine, scheduled maintenance, they said.

“The ultimate goal is to monitor it in flight and have it tell you, ‘I need some attention. I’ve got a problem here,’” Roach said. “So you do condition-based maintenance rather than time-based maintenance. That’s downstream a ways, but these are all building blocks working toward that.”

He characterized the ongoing research and its path toward submission to the FAA as “a recipe for approval of in situ on-board sensors,” adding that SHM will eventually be used in a number of areas in monitoring and maintenance.

“It’s not going to be a substitute for every inspection process,” he said, “but it could be used for some specific ones.”