A report cites ‘troubling evidence’ about some approaches to helicopter safety in the North Sea energy industry.. 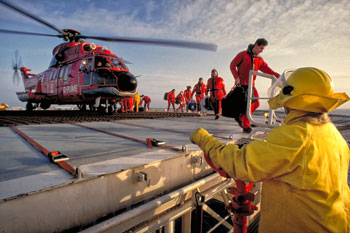 A committee of the British Parliament says it found evidence of a “macho, bullying culture” in the North Sea oil and gas industry, including one report that workers who expressed concern about the safety of the helicopters that transport them to offshore platforms were told they should leave the industry.1

Besides the ditchings in 2012, three additional accidents involving North Sea helicopters — two of them fatal — have occurred since 2009 (“North Sea Helicopter Crashes, 2009–2013”). All of the accidents involved Super Pumas, which make up about 60 percent of the North Sea helicopter fleet, the report said, adding that their numbers mean that “it is unsurprising that they are involved in more accidents than other models.”

The House of Commons Transport Committee opened its inquiry into offshore helicopter safety after the most recent accident — in which four of the 18 people aboard were killed when a Super Puma AS332 L2 crashed into the sea near Sumburgh, Shetland Islands, on Aug. 23, 2013.

During the inquiry, the committee “heard troubling evidence” about the safety culture in the oil and gas industry, the panel’s report said.

“We were disturbed to hear that just weeks before the Sumburgh crash, workers who had raised concerns about the airworthiness of Super Pumas were told by officials at the oil company … to put on ‘big-boy pants’ or quit if they could not deal with the risk of helicopter crashes,” the report said. “That insensitive approach further eroded confidence in Super Pumas among the offshore work force.”

The report said that, although a labor union characterized the safety culture within the industry as one of “macho bullying that exists with the tacit acceptance of the employers,” an official of Oil & Gas UK — an industry organization — described healthy collaboration between the industry and the offshore workers. Nevertheless, the report added that the official agreed that the “big-boy pants” remark “highlighted the need to rebuild work force confidence and to improve communication between workers and managers.”

The Transport Committee said in the report that it was “unacceptable that offshore workers were told by an operations manager that they should leave the industry if they were concerned about helicopter safety. In an inherently hazardous industry, operations managers must prioritise safety, which means facilitating a culture of approachability and openness at all levels.”

The CAA’s review did not thoroughly examine the effects of commercial pressures on helicopter safety, the committee said, adding, “The evidence that we heard was polarised, and commercial sensitivities mean that it is difficult for most external reviews to examine the contractual obligations set by industry.”

The committee recommended that the U.K. Department for Transport conduct an inquiry in that area as well as on the role and effectiveness of the CAA in regulating the industry. In addition, the department should commission independent research on safety improvements and threats to safety in the industry, the committee said.

Among the committee’s other recommendations was a call for the CAA to ensure that operators regularly review helicopter safety information and ensure that it accurately describes how equipment should be used. The committee’s report cited preliminary AAIB information about the August 2013 crash that indicated that preflight briefing material “did not fully represent” the type of underwater emergency breathing system available in the helicopter for use in case of a ditching. As a result, the report said, some crash survivors did not use the breathing equipment.

The Transport Committee report cited the CAA’s review of offshore helicopter safety, published earlier this year, for proposing dozens of changes intended to bolster safe operations, including prohibiting all but emergency flights during the most severe sea conditions, requiring enhanced underwater breathing equipment for all passengers and establishing the Offshore Helicopter Safety Action Group to implement its recommendations.

Nevertheless, the report added that the CAA should consult with the industry “to ensure its demands are realistic and implemented in a way which continues to allow for maximising economic recovery.”

Another Transport Committee recommendation noted that Norway’s offshore safety record has improved over the past decade while the U.K.’s record has declined, and that the CAA has said it can find no explanation for the divergence.

The committee, noting that the offshore industry “has little appetite for transferring more responsibility for helicopter operations to a European level,” also urged the Department for Transport to “push EASA [the European Aviation Safety Agency] to improve its response and implementation times” when it receives safety recommendations from the CAA.

In its final report on the 2012 ditchings — discussed in a single report because their circumstances were so similar — the AAIB said that each accident occurred after a loss of main rotor gearbox oil pressure. In each case, the crew activated the emergency lubrication system on the EC225 LP Super Puma as required.

“Both helicopters should have been able to fly to the nearest airport,” the AAIB report said. “However, shortly after the system had activated, a warning illuminated indicating that the emergency lubrication system had failed. This required the crews to ditch their helicopters immediately in the North Sea.”

Each ditching was successful, and no serious injuries were reported to any of the 14 people in the first helicopter or 19 people in the second. In each case, the helicopters were flown by two-pilot crews and were transporting workers from Aberdeen Airport in Scotland to drilling rigs in the North Sea.

After each ditching, passengers and crewmembers evacuated into the helicopter’s life rafts. They were rescued soon afterward.

The AAIB report said that a fatigue crack in the vertical shaft of the main gearbox bevel gear was to blame for the loss of drive to the oil pumps in both helicopters, which launched the chain of events that led to the ditchings.

In each case, the investigation determined that the emergency lubrication system had been operating properly, but the system warning light illuminated because of “an incompatibility between the helicopter wiring and the pressure switches,” the report said. “This meant the warning light would always illuminate after the crew activated the emergency lubrication system.”

Nevertheless, because it was impossible for the flight crews to know that the system was working properly, ditching was the appropriate, safe response to illumination of the warning light, the report added.

The two accidents prompted a 10-month grounding of the North Sea fleet of Super Pumas, followed by a flurry of alert service bulletins from Eurocopter, and airworthiness directives and safety directives from regulators, outlining the steps required before the helicopters would be permitted to return to the skies.

The ban on flights was rescinded days before the August 2013 fatal crash, which, in turn, prompted a second, shorter suspension of flights. The AAIB was continuing its investigation, but preliminary reports said circumstances surrounding the accident, which destroyed the helicopter, were not similar to those of the 2012 ditchings. The AAIB said that early phases of the investigation revealed no evidence of a technical problem and that investigators were focusing on operational aspects of the flight, “especially on the effectiveness of pilot monitoring of instruments during the approach, operational procedures and the training of flight crews.”

Accident investigators found that the ditching of each of the helicopters involved in the 2012 accidents followed a loss of oil pressure that resulted from “a failure of the bevel gear vertical shaft in the main rotor gearbox, which drives the oil pumps,” the report said. “The shafts had failed as a result of a circumferential fatigue crack in the area where the two parts of the shaft are welded together.”

The pilots of the second accident helicopter had read the preliminary reports on the first accident, and the copilot — a training captain who was using the flight as part of the revalidation of the captain’s line training qualification — had incorporated details of the accident into a scenario to be used in simulator training for other flight crews.

The AAIB issued several new safety recommendations, including a call for EASA to review the installation of the type of life raft used in the helicopter to ensure “a high degree of deployment reliability in foreseeable sea conditions.”

U.K. helicopters used in the North Sea offshore oil and gas industry have been involved in five crashes — two of which resulted in a total of 20 fatalities — since 2009. All five accidents involved variants of the Eurocopter1 Super Puma, and three were attributed to gearbox problems. The five accidents were:2,3