Brief naps in controlled situations on the flight deck can be beneficial to managing fatigue, new report says. 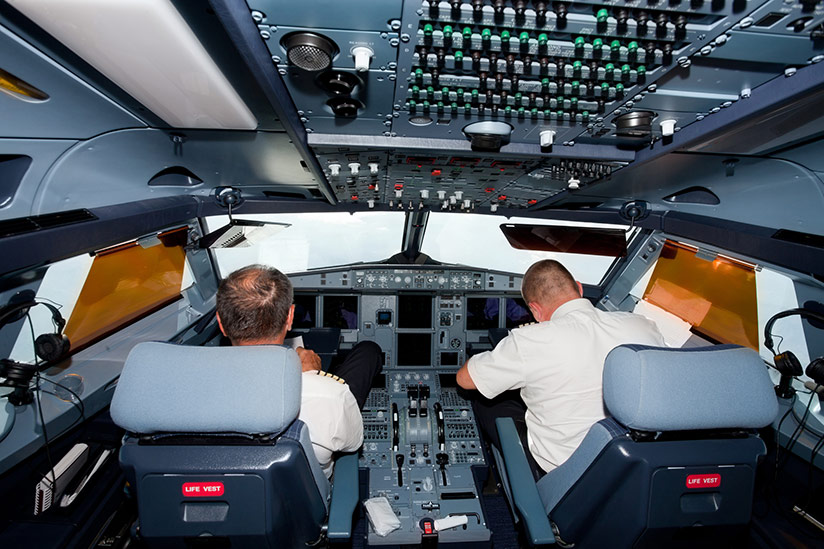 Scientific research and practical operational experience suggest that a well-designed and monitored procedure of controlled rest (CR) on the flight deck has the potential to reduce fatigue-related safety risk and could be an effective tool for use by pilots in managing their fatigue, according to a paper recently released by the Fatigue Countermeasures Working Group.1

The paper, “Controlled Rest on the Flight Deck: A resource for operators,” was published on Flight Safety Foundation’s website in early November and was the subject of a presentation at the Foundation’s 71st annual International Air Safety Summit (IASS), held in Seattle on Nov. 12–14.

In their IASS presentation, Alexandra Holmes, Ph.D., research director at Clockwork Research, and Brad Favors, chairman of the working group and manager, fatigue and human performance, at Southwest Airlines, said that the strength of the science demonstrating the benefits of naps to manage fatigue, the common occurrence of uncontrolled or unintentional sleep where CR is not allowed, and positive feedback on CR from experienced operators demonstrate that “CR should be considered a beneficial tool to help manage unanticipated fatigue.”

The extent to which an operator effectively manages fatigue risk depends on the effectiveness of the system of controls that is put in place, the paper says. Controls often include fatigue management training, a crew fatigue reporting system, fatigue-risk-based scheduling rules, and a fatigue safety action group (FSAG) that coordinates the identification, assessment and mitigation of fatigue risk, and monitors the effectiveness of fatigue risk management controls and systems.

“Despite the best efforts of operators and flight crew, there will always be situations in which flight crew experience unanticipated elevated fatigue in flight,” the paper says.

Among the in-flight measures pilots use to manage fatigue are the strategic use of caffeine; activity breaks; and crew resource management principles such as communicating openly about individual fatigue levels, verbalizing all actions, not accepting changes to the flight plan, workload management, and configuring and stabilizing the aircraft early in the approach phase.

Some operators also have the benefit of CR, which the paper describes as a tactical in-flight fatigue management strategy. “In accordance with an approved CR procedure, one flight crewmember is temporarily relieved of operational duties, and takes a short, in-seat rest break, during which he or she closes his (or her) eyes and attempts to sleep. CR enables a flight crewmember to use a period of low workload to obtain a brief period of sleep and thereby improve alertness and performance, particularly for later, more critical phases of flight such as descent and landing,” according to the paper. 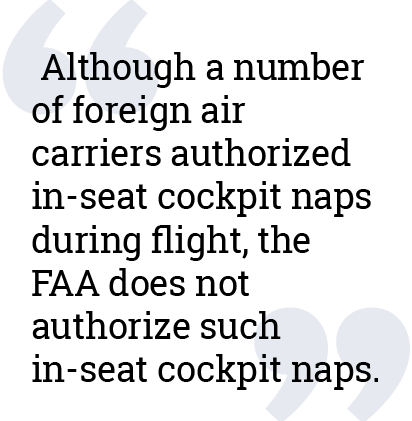 The International Civil Aviation Organization (ICAO) recommends CR as an effective mitigation strategy to be used in response to unanticipated fatigue during flight operations, according to the paper, which goes on to say that CR “should not be used as a scheduling tool, i.e., as a planned strategy to enable extended duty periods.”

The European Aviation Safety Agency says that “the use of controlled rest has been shown to significantly increase the levels of alertness during the later phases of flight, particularly after the top of descent, and is considered to be good use of CRM [crew resource management] principles,” according to the paper.

CR is practiced in a number of regions and countries. For example, regulators permit CR for some or all operators in Europe, Australia, Bolivia, Canada, China, Israel, New Zealand, Turkey and the United Arab Emirates. In the United States, the Federal Aviation Administration does not endorse the use of CR in commercial air transport, despite recognizing the value of napping as a strategy for restoring alertness levels.

“…[A]t times when some amount of sleep is possible but limited, napping is the most effective physiological strategy for restoring alertness levels. Naps have shown to be beneficial for restoring both performance and alertness levels, especially during long periods of wakefulness. Even short naps of 25–30 minutes can have beneficial effects. Controlled studies have shown that a nap can yield significant improvements in subsequent pilot alertness and vigilance performance compared to similar pilots who did not receive the nap so methods that augment crews to permit napping outside the cockpit [are] a viable fatigue countermeasure under current FAA rules. The FAA authorizes in-flight naps for flight crew if there is an augmented complement so that two pilots are on the flight deck while the augmented crewmembers are resting. Although a number of foreign air carriers authorized in-seat cockpit naps during flight, the FAA does not authorize such in-seat cockpit naps.”2 (emphasis added)

However, CR is permitted by the U.S. Coast Guard and the Air Force, according to the paper.

CR is different from in-flight rest in that the latter is planned before a flight and only occurs on augmented flights crewed by three or four pilots. In-flight rest involves individual flight crewmembers taking turns leaving the flight deck, usually for multiple hours, to rest and sleep in designated areas in blocked-off cabin seats or a designated rest facility. In contrast, CR is not planned before a flight, is taken in-seat on the flight deck and involves a short rest period during which a nap is taken.

In an example of a CR profile included in the paper, 10 minutes is allotted for a controlled rest briefing and preparation, 40 minutes for a controlled rest period, and then at least 20 minutes for a recovery period in which the crewmember recovers from the effects of sleep inertia, which is the sleepiness, disorientation and impaired cognitive performance that often is experienced after waking from sleep. The CR briefing between the flight crewmembers should cover such topics as fuel, route, planned duties, a review of CR procedures, the time of planned waking and safeguards.

According to the paper, ICAO has outlined the following basic principles for CR:

In discussing why the working group decided to offer the resource guide, Favors and Holmes said at IASS that fatigue risk management using flight and duty time limitations alone may not be effective and that operators who do not have a CR procedure may be lacking a valuable tool. They also said that operators who have a CR procedure may not be fully appreciating its benefits and that fatigue risk within an operation may be masked by the use of CR if CR is not tracked.

“One example of using CR data to inform FRMS [fatigue risk management system] policy involved an airline that observed more than 20 percent of flight crew using CR on a daytime long-haul operation. The airline FSAG said that there was a need for further fatigue mitigation on this flight and chose to augment the flight crew with an additional crewmember. This case study highlights the value of a CR reporting system as part of a continually evolving FRMS. If such data were to be shared or published, a database of multiple reports could also be helpful in shaping [fatigue risk management] policy at an industry level.”

The paper includes background on the science and studies related to fatigue in aviation and to CR, and includes a discussion about the importance of recognizing and managing sleep inertia following a nap. “Research has shown that the length, timing and depth of a nap can influence sleep inertia severity and duration,” the paper says.

Other elements of the paper include considerations for using CR, evidence that supports a policy to permit CR, details on how to design and review a CR procedure, and guidance on whether and when to use CR.

“The safety case for CR is strong, in terms of both the science and more than 20 years of operational experience,” the paper concludes. “However, further research, field research, is needed to continually inform best practice guidelines for the safe and effective implementation of CR.”