The FAA has proposed its largest civil penalty ever against a UAS operator accused of unauthorized operations in congested airspace. 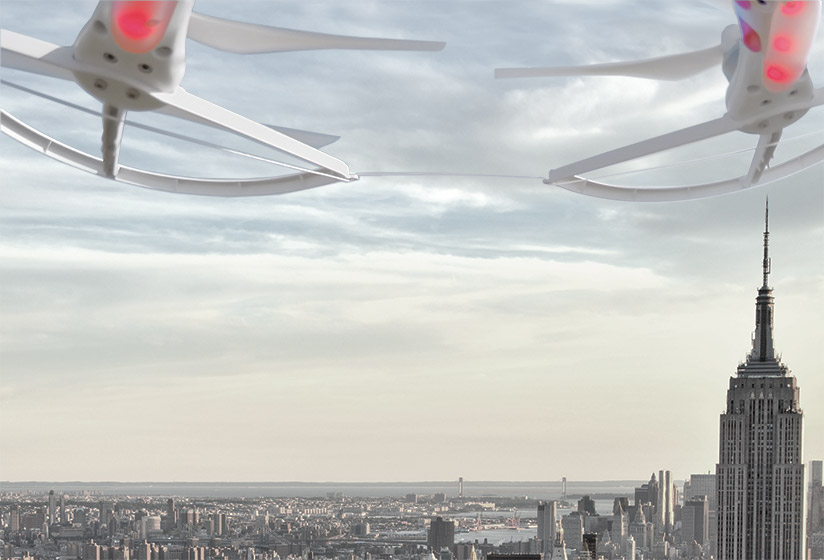 U.S. authorities are intensifying efforts to stop the illegal operation of unmanned aircraft systems (UAS) and model aircraft near airports and in restricted airspace, proposing a high-tech campaign to detect the aircraft and a stiff penalty against one operator.

“Education and enforcement must go hand-in-hand,” said Michael G. Whitaker, deputy administrator of the U.S. Federal Aviation Administration (FAA). “Our preference is for people to voluntarily comply with regulations, but we won’t hesitate to take strong enforcement actions against anyone who flies an unmanned aircraft in an unsafe or illegal manner.”

Whitaker made the remarks during testimony in early October before a U.S. House of Representatives aviation subcommittee that met to consider methods of ensuring aviation safety as UAS aircraft are integrated into the National Airspace System (NAS).

A day earlier, the FAA proposed what it said was the largest civil penalty ever against a UAS operator for “endangering the safety of our airspace.”

The agency proposed a $1.9 million civil penalty against SkyPan International, alleging that the company conducted 65 unauthorized operations between March 21, 2012, and Dec. 15, 2014, “in some of our most congested airspace and heavily populated cities, violating airspace regulations and various operating rules. … These operations were illegal and not without risk.”

In announcing the proposed penalty in October, the FAA said that the flights — photographic missions conducted over New York and Chicago — were conducted “in a careless or reckless manner so as to endanger lives or property.”

All 65 flights were operated without a required airworthiness certificate and effective registration, the FAA said, adding that SkyPan also lacked a certificate of waiver or authorization for the flights. Forty-three of the flights were operated in New York’s controlled airspace without an air traffic control clearance, which is required to operate in that airspace; the aircraft also lacked the required two-way radio, transponder and altitude-reporting equipment, the FAA said.

“Flying unmanned aircraft in violation of the Federal Aviation Regulations is illegal and can be dangerous,” said FAA Administrator Michael Huerta. “We have the safest airspace in the world, and everyone who uses it must understand and observe our comprehensive set of rules and regulations.”

SkyPan has 30 days after receiving the FAA’s enforcement letter to respond to the agency’s allegations.

In his testimony before the House Committee on Transportation and Infrastructure’s aviation subcommittee, Whitaker said that the proposed civil penalty “sends a clear message to others who might pose a safety risk — operate within the law or we will take action.”

The SkyPan occurrences were among hundreds of incidents that the FAA has investigated regarding reports of UAS being operated outside existing regulations. In August, the agency released data on 765 reported UAS aircraft sightings from Nov. 13, 2014, through Aug. 20, 2015, and noted that, although most of the events were simple sightings of UAS aircraft, 27 could be considered near-midair collisions (ASW, 10/15). A number of the events involved small UAS aircraft being flown in restricted airspace.

Whitaker said that — unlike SkyPan, which he said “knowingly conducted dozens of unauthorized flights” — many operators of these small UAS are “completely new to the aviation experience” and, as such, “unaware that they are operating in shared airspace.”

He added, “The vast majority of these operators do not have the basic aviation training or experience required for pilots of traditional aircraft. They have no knowledge that they may be flying in controlled airspace. Some may have no recognition that their actions could have serious consequences. They are simply having fun with a toy.”

In response to lawmakers’ questions, Whitaker said that the FAA is considering proposals calling for registration of UAS, but no decisions have been made. Rich Hanson, director of government and regulatory affairs for the Academy of Model Aeronautics, said that members of his organization “understand that registration at some level certainly makes sense.”

Whitaker told the subcommittee that the FAA and other government agencies are reviewing their authority to identify and penalize operators of unmanned aircraft that are being flown in prohibited airspace and that they have determined that the problem is not a lack of authority to punish rogue operators.

Instead, he said, “One of the challenges with this issue is actually locating UAS operators. It’s less a question of authority or magnitude of penalty. … If you look at the pilot reports, they tell us where the UAS [aircraft] is, but they don’t tell us where the operator is. If you contrast that with laser strikes, the pilot usually knows exactly where that strike is coming from … which is why our emphasis has been on education.”

The FAA and several organizations representing operators of model aircraft and small UAS have joined forced forces for the Know Before You Fly program, designed to provide guidance on the responsible operation of unmanned aircraft, with an emphasis on avoiding manned aircraft.

Other programs such as the No Drone Zone campaign remind operators not to take unmanned aircraft to large public gatherings such as football games and outdoor concerts, as well as other sensitive areas, including within 15 mi (24 km) of Reagan Washington National Airport — an area where a small unmanned aircraft crashed near the White House two days after the subcommittee hearing. News reports said that the operator of the quadcopter was cited by police and faces a possible fine. The report quoted the U.S. Park Police as saying that, to their knowledge, the incident marked the ninth time in 2015 that an unmanned aircraft had been flown in a national park in the Washington area.1

Because the educational efforts alone might not be sufficient, the FAA said in October that it has reached an agreement with information technology firm CACI International to evaluate the company’s prototype UAS sensor-detection system, using it to identify unmanned aircraft being operated within 5 nm (9 km) of airports.

“Safety is always the FAA’s top priority,” Whitaker said, “and we are concerned about the increasing number of instances where pilots have reported seeing unmanned aircraft flying nearby.”

The FAA added that an unmanned aircraft flown near a busy airport presents “an unacceptable hazard.”

John Mengucci, CEO and president of U.S. operations for CACI, said that the agreement with the FAA “provides a proven way to passively detect, identify and track UAS … and their ground-based operators, in order to protect airspace from inadvertent or unlawful misuse of drones near U.S. airports.” 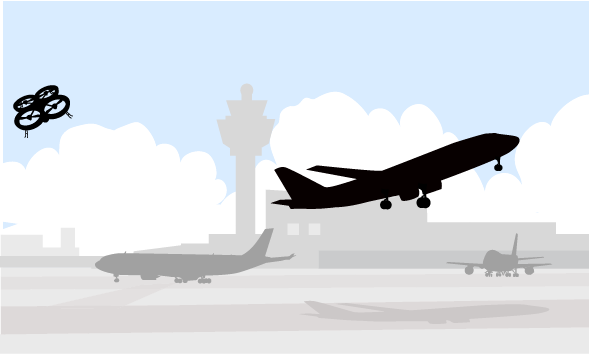 Officials are still working to finalize program details, including when the system will be tested and at which airports, Whitaker said.

He added that the agency also will evaluate the use of geo-fencing — using global positioning system information to establish areas that are off-limits to UAS flight. Manufacturers of model aircraft have begun to incorporate geo-fencing features into their aircraft, the Academy of Model Aeronautics says.

The CACI program is part of the UAS Pathfinder Program, announced by the FAA earlier this year as a plan for the agency and the industry to “explore the next steps” in UAS operations.

The FAA’s other partnerships in the Pathfinder Program are with three companies, including CNN, which is determining how UAS might be used within the operator’s line of sight in newsgathering operations in urban areas.

The two other partnerships involve flights of unmanned aircraft in rural areas:

PrecisionHawk, which is exploring how UAS flights “outside the pilot’s direct vision” might allow for expanded use of unmanned aircraft in monitoring agricultural crops; and,

BNSF Railroad, which is determining how unmanned aircraft might be used beyond the operator’s line of sight to inspect rail infrastructure.

In his testimony, Whitaker said that the FAA’s regulatory framework “needs to keep pace with technology” and that, to accomplish that goal, the agency was continuing to review 4,500 public comments on its proposed small UAS regulations in preparation for issuing final rules.

“The rulemaking approach we are using seeks to find a balance that allows manufacturers to innovate while mitigating safety risks,” Whitaker said. “We also recognize the need to be flexible and nimble in how we respond to the emerging UAS community. As technologies develop, and as operations like beyond line of sight are researched, we want to be able to move quickly to safely integrate these capabilities.”

The FAA has said that it expects to issue a final rule in 2016. That rule, first proposed in February, will apply only to small UAS aircraft — those that weigh less than 55 lb (25 kg) — and is designed to allow routine use of small UAS in the aviation system.

Under the proposed rule, small UAS aircraft being flown for non-recreational purposes could be operated only during daylight, only within the operator’s line of sight, at altitudes no higher than 500 ft and at speeds no faster than 100 mph (161 kph).

The proposed rule also said that UAS operators would be required to be at least 17 years old, pass an initial FAA aeronautical knowledge test and recurrent tests, obtain an unmanned aircraft operator certificate with a rating for small UAS aircraft and be vetted by the Transportation Security Administration.

The proposal included the FAA’s request for public comments on whether the agency should establish a new category for “micro” UAS — systems with aircraft weighing less than 4.4 lb (2.0 kg) — that could be flown only in Class G uncontrolled airspace and only if they are at least 5 nm from any airport.

The final rule will not apply to model aircraft operators, who are subject to another law that requires them to avoid interfering with manned aircraft, to keep their models within the operator’s line of sight at all times and to fly them only for recreational purposes. Operators of model aircraft who fly their aircraft within 5 nm of an airport must notify the airport operator and air traffic control tower.

Whitaker told the subcommittee that the timing of the subsequent development of rules for larger UAS would depend on commercial demand and technology.

“The primary goal of the FAA is to integrate this new class of aircraft and their operators safely and efficiently into the NAS, regardless of whether the operations are recreational or commercial in nature,” he said. “Because this new branch of aviation is changing at the pace of human imagination, the FAA believes a flexible framework is imperative. … Our goal is to provide the basic rules for operators, not identify specific technological solutions that could quickly become outdated.”