A 757 overran a short, contaminated runway after the speed brakes and thrust reversers failed to deploy on landing. 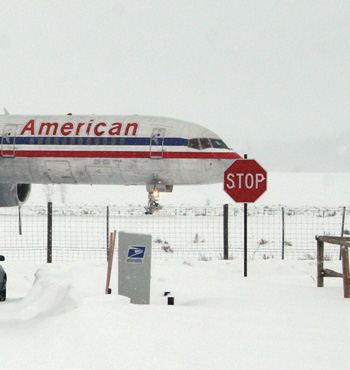 The pilots were distracted and confused by the failure of the thrust reversers to deploy on command and did not notice that the speed brakes had not extended automatically on touchdown. Lacking adequate deceleration, the airplane — a Boeing 757-200 — ran off the end of the wet runway and became mired in deep snow.

There were no injuries and only minor damage to the airplane during the Dec. 29, 2010, incident, which occurred at Jackson Hole (Wyoming, U.S.) Airport. In its final report, the U.S. National Transportation Safety Board (NTSB) said that the investigation revealed that a manufacturing defect in a clutch mechanism had prevented the speed brakes from extending and that the thrust reversers momentarily had become locked in transit when the weight-on-wheels “ground” signal was interrupted on touchdown.

The clutch defect and the captain’s “failure to monitor and extend the speed brakes manually” were cited as the probable causes of the incident. Contributing factors were the captain’s reflexive callout of speed brake extension without confirmation that they had indeed deployed and the distraction resulting from the nondeployment of the thrust reversers.

The report said that safety issues identified during the incident investigation included “inadequate pilot training for recognition of a situation in which the speed brakes do not automatically deploy as expected after landing; lack of an alert to warn pilots when speed brakes have not automatically deployed during the landing roll; lack of guidance for pilots of certain Boeing airplanes to follow when an unintended thrust reverser lockout occurs; lack of pilot training for multiple emergency and abnormal situations; and lack of pilot training emphasizing monitoring skills and workload management.”

The NTSB made several recommendations urging the U.S. Federal Aviation Administration to address these issues. (The recommendations will be discussed in the October issue of ASW.)

The airline had designated Jackson Hole (JAC) as a “special airport” because of its challenging landing conditions, and both pilots had completed the extra training required to operate there. Moreover, the captain had flown to JAC about 400 times. The first officer told investigators that he had made frequent flights there, including four with the captain during the month of the incident.

The airport is located at 6,491 ft in the Rocky Mountains of western Wyoming and has one runway, 01/19, which is 6,300 ft (1,920 m) long. The pilots told investigators that the runway is usually slippery during the ski season and that high landing weights are common when operating at the airport. “As a result, they said they were especially vigilant and began preparing for the approach and landing at JAC early during what they described as an uneventful flight,” the report said.

During the flight, the pilots obtained several updates on the weather conditions at the airport. As the 757 neared JAC in late morning, weather conditions were reported as 3/4 mi (1,200 m) visibility in light snow, winds from 190 degrees at 6 kt, a broken ceiling at 400 ft and an overcast at 1,000 ft. The active runway, 19, was wet and contaminated with snow; braking action was reported as “good” on the first two-thirds of the runway and as “poor” on the last third.

The airplane’s landing weight was 194,055 lb (88,023 kg), or 3,945 lb (1,789 kg) lower than maximum. Planning to touch down within 1,000 ft (305 m) of the approach threshold and to stop the airplane within the first two-thirds of the runway, the flight crew armed the speed brakes for automatic deployment and selected the “MAX AUTO” autobrake setting.

The report indicates that the crew conducted the instrument landing system approach to Runway 19. The 757 touched down firmly about 600 ft (183 m) from the runway threshold. According to the flight crew’s performance calculations and a study conducted by investigators, the remaining 5,700 ft (1,737 m) of runway should have been sufficient to complete the landing with all systems operating normally.

Recorded flight data indicated that the thrust reversers deployed fully about 18 seconds after the airplane touched down and that full reverse thrust was developed 10 seconds later.

Both pilots told investigators they were not aware that the speed brakes — six panels atop each wing — had not extended until the airplane came to a stop beyond the departure end of the runway. “The pilots could have manually extended the speed brakes at any time during the landing roll, had they recognized the nondeployment,” the report said.

Investigators found that the 757’s air/ground sensing system, which is based on proximity sensors on the main landing gear, transitioned from “air” to “ground” when the airplane touched down. About one second later, however, the system cycled back to the air mode for about a half second. This likely occurred when one or both of the main gear unloaded after touchdown, possibly because of a slight bounce, causing at least one of the proximity sensors to open.

“This brief cycling of the air/ground signal during a landing is not uncommon,” the report said. “However, in this case, it coincided with the first officer’s attempt to deploy the thrust reversers immediately after touchdown. … Because of the precise timing of these events, a rare mechanical/hydraulic interaction occurred in the thrust-reverser system, and the thrust reversers were locked in transit instead of continuing to deploy.”

The thrust-reverser system on 757s and 767s equipped with Pratt & Whitney engines has a “sync-lock” mechanism that is intended to prevent the translating sleeves from extending accidentally due to a fault in the system. “This lockout would prevent movement of the thrust reversers until about 5 seconds after a pilot moves the reverse-thrust levers back to their stowed position, allowing the thrust reverser system to deactivate and begin deployment again when commanded,” the report said. “During post-incident interviews, both pilots indicated that they were unaware of a circumstance in which the thrust reversers could be locked in transit and were unaware of the actions needed to correct the situation.”

Investigators found that many other 757 and 767 pilots were not aware that this situation could occur. “The potential for this type of event had not been identified before this incident,” the report said. “As a result, Boeing’s 757/767 guidance did not contain related guidance.”

Standard operating procedure required the pilot monitoring — the captain in this case — to observe speed brake, thrust reverser and autobrake operations during the landing roll. Automatic deployment of the speed brakes is indicated in part by movement of the speed brake handle, which is on the middle left side of the center console. Green “REV” annunciator lights, one for each engine, illuminate on the engine indicating and crew alerting system (EICAS) when the thrust reversers deploy fully.

The American Airlines 757/767 Operating Manual notes that awareness of speed brake lever position is important in preventing runway excursions. “Without speed brakes deployed after touchdown, braking effectiveness may be reduced initially by as much as 60 [percent],” the manual says.

Although there were no indications that either the speed brakes or the thrust reversers had deployed fully, the captain called out “deployed” about 2.8 seconds after touchdown and “two in reverse” 1.2 seconds later.

The slight movement of the speed brake handle coincided with the illumination of amber lights on the EICAS indicating that the thrust reversers were in transit; the green “REV” lights, indicating full deployment, did not illuminate. “Given the typical reliability of the thrust-reverser system, it is likely that the captain made the [‘two in reverse’] callout because he expected normal thrust reverser deployment after seeing the amber EICAS annunciation.”

Despite the captain’s callout, the first officer recognized immediately that the thrust reversers were not functioning normally. Both pilots then “tunneled their attention on deploying the thrust reversers,” the report said. “Both pilots were distracted by, confused by, and trying to resolve the thrust reversers’ nondeployment. … Neither pilot was able to broaden his focus enough to look at the big picture and notice that the speed brakes (the more crucial deceleration tool) had not deployed.”

Noting that multiple emergency situations typically are not presented during pilot training, the report said, “If the incident pilots had received specific pilot training on the handling of multiple emergency or abnormal situations, they might not have focused exclusively on the thrust reverser nondeployment and might have been more likely to recognize and properly resolve the speed brake nondeployment during the landing.”

Initial examination and testing of the automatic speed brake system revealed nothing that could have prevented normal operation. However, about three months later, the speed brakes again failed to deploy automatically; the flight crew in this case noticed the failure and manually deployed the speed brakes.

After this incident, the system was removed and examined again. This time, investigators found a “latent assembly defect” in the clutch mechanism that intermittently prevented an actuator from driving the speed brake lever out of the “ARMED” detent to extend the speed brakes, the report said.

The manufacturing defect can be found only by disassembling the clutch, which is not required during normal maintenance. “As a result of this investigation, the manufacturer clarified its documentation to ensure proper assembly of the clutch units,” the report said.

‘Non-extreme’ weather conditions are responsible for most U.S. flight delays, the FAA says.

The pilots of an EC-130 air tanker likely were unaware of other crews’ decisions to stop operations at a nearby fire site because of high winds, the ATSB says.