Efforts focusing on improving aviation safety in Africa are paying off, report says.

Efforts to elevate safety standards in the commercial air transport industry in Africa contributed to a decline in 2016 in the number of total accidents, fatal accidents and fatalities in both jet and turboprop operations — and to a year with no fatal accidents in sub-Saharan Africa, according to the International Air Transport Association (IATA).1

IATA’s Safety Report 2016, made public earlier this year, says that in addition to the lack of fatal accidents, no jet hull loss2 accidents were reported in the 48 nations of sub-Saharan Africa,3 and the turboprop accident rate dropped to 3.31 per million flight sectors in 2016, down 42 percent from its 2011–2015 annual average.

Overall, the report said, the global commercial air transport industry’s safety record improved 54 percent between 2007 and 2016, with a 2016 accident rate of 1.61 accidents per million flight sectors. In 2007, the accident rate was 3.53 per million sectors (Figure 1). 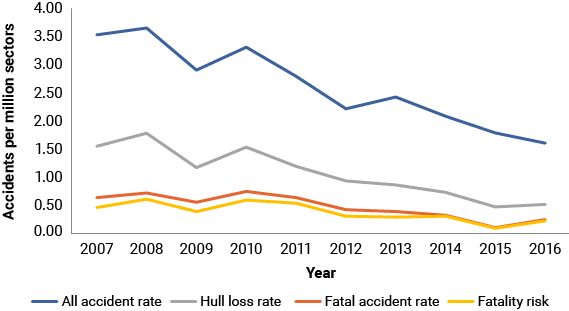 The total accident rate in 2016 was 10 percent below the 2015 rate — with 65 total accidents, compared with 2015’s 68 (Table 1). The report added that “this overall positive performance was counterbalanced by an increase in the number of fatalities, fatal accidents and hull losses versus the previous year.”

Of 2016’s 10 fatal accidents, six involved cargo flights and four, passenger flights, including Egypt Air Flight 804, Airbus A320 that crashed into the Mediterranean Sea on May 19, killing all 66 passengers and crew, and LaMia Flight 2933, an Avro RJ that crashed near Medellín, Colombia, on Nov. 28, killing 71 of the 77 people in the airplane.4

Regionally, the African region experienced its best safety performance in a decade, the report said, noting that the total accident rate fell 89 percent between 2007 and 2016 (Figure 2).

The lowest total accident rates in 2016 were in North Asia and North America, and the highest were in the Middle East and North Africa, and the Commonwealth of Independent States (Figure 3).

Figure 3 — Jet and Turboprop Accidents per Million Sectors by Region, 2016

In an analysis of major contributing factors, IATA determined that regulatory oversight was the most frequently cited “latent condition” (52 percent) in 2012–2016 accidents in the Africa region, followed by safety management (44 percent) and management decisions (11 percent). The report defined latent conditions as “conditions present in the system before the accident, made evident by triggering factors … often [relating] to deficiencies in organizational processes and procedures.”

“Manual handling/flight controls” was the most frequently cited flight crew error (26 percent), followed by adherence to and cross-verification of standard operating procedures (19 percent), failure to go around after a destabilized approach (15 percent) and pilot-to-pilot communication (11 percent).

“Airport facilities” was most frequently cited (33 percent) in the “threats” category, followed by four items that each were cited in 19 percent of accidents: contaminated runway/taxiway — poor braking action, aircraft malfunction, meteorology and gear/tire. A threat was defined in the report as “an event or effort that occurs outside the influence of the flight crew but which requires flight crew attention and management to properly maintain safety margins.”

The report said the most frequently cited countermeasures were overall crew performance (19 percent) and “captain should show leadership” (11 percent).

Eleven percent of 2016 accidents were classified as loss of control–in flight (LOC-I), and LOC-I accidents not only were responsible for more fatalities than any other category (79 people) but also contributed to “a higher ratio of people who perished, compared to the number of people on board” (Figure 4). 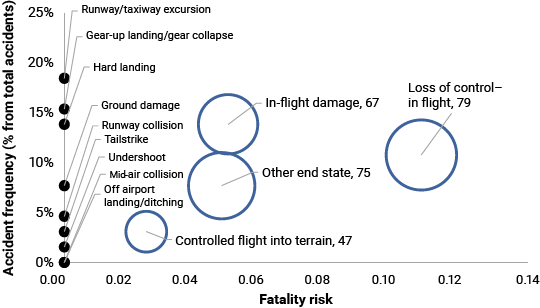 The fatal accident rate for U.S. passenger and cargo airlines has declined significantly since 2001,…

Despite the high-profile crash of an Ethiopian Airlines Boeing 737 MAX, 2019 was among the…

Some 393 people were killed in civil aviation accidents in the United States in 2018,…