Exception to the Rule

When the airplane would not rotate, rejecting the takeoff several seconds after reaching V1 was the right thing to do. 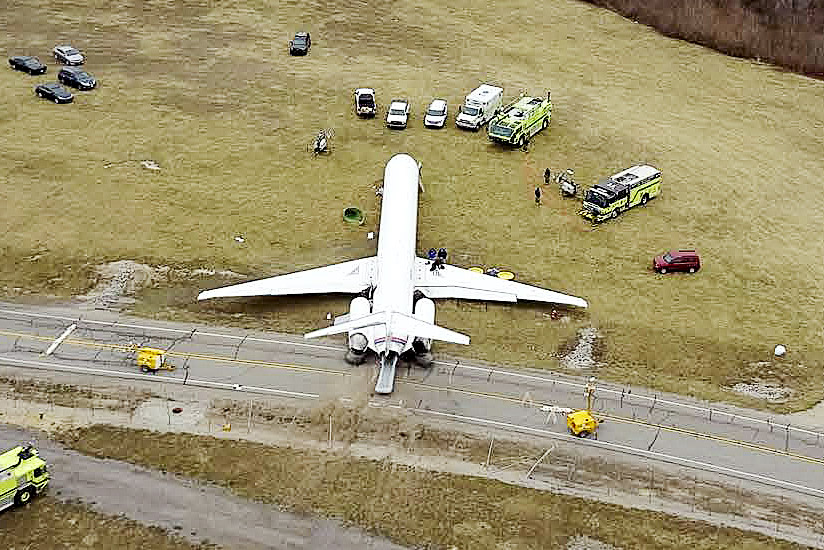 The MD-83 came to a stop after overrunning the runway and striking several obstacles. Damage was substantial, but only one of the 116 people aboard was hurt: a passenger who sustained minor injuries during the evacuation. The airplane’s cockpit voice recording ended with the captain explaining to his colleague that the airplane just would not fly. “I had it [the control column] all the way back here,” he said. “It was not rotating.”

The ensuing investigation determined that freakish winds had caused the right elevator to jam while the airplane was parked on the ramp. The condition was not detectable during preflight preparations, and the jammed elevator had rendered the airplane unflyable.

The actions taken by the captain and the check airman were credited as likely having prevented significantly more damage and injury. “Once the airplane’s inability to rotate became apparent, the captain’s decision to reject the takeoff was both quick and appropriate,” said the U.S. National Transportation Safety Board (NTSB) in its final report on the accident. “The check airman’s disciplined adherence to company standard operating procedures [SOPs] after the captain called for the rejected takeoff likely prevented further damage to the airplane and reduced the possibility of serious or fatal injuries to the crew and passengers.”

The accident occurred on a windy afternoon at Willow Run Airport in Ypsilanti, Michigan, U.S., on March 8, 2017. The airplane was being operated by Ameristar Charters, a division of Ameristar Air Cargo, as an on-demand flight from Ypsilanti to Washington Dulles International Airport.

The captain, 54, had 15,518 flight hours, including 4,752 hours as PIC of DC-9s. He held type ratings in the 747 and Saab 340, as well as the DC-9. The captain was hired by Ameristar in January 2016 as a DC-9 first officer and was promoted to captain a month later. He eventually was assigned as a DC-9 flight simulator proficiency check airman. The captain was upgrading to the MD-83 and was receiving differences training by the check airman.1 The accident occurred on his fourth flight with the check airman.

The MD-83 had been parked outside on the ramp at Willow Run Airport for two days. “The elevators (which, by design, did not have gust locks) were exposed to high, gusting surface wind conditions,” the report said. Boeing requires that maintenance personnel conduct visual and physical inspections of the flight controls if an MD-83 is subjected to wind velocities exceeding 65 kt.2 However, the highest reported wind gust was 55 kt while the airplane was parked.

Although the recorded wind and gust velocities were not high enough to require a maintenance inspection, “the airflow at the airplane’s parked location was affected by the presence of a large hangar that generated localized turbulence with a vertical component that moved the elevator surfaces rapidly up and down, which resulted in impacts against the elevator mechanical stops, imposing dynamic loads sufficient to jam the right elevator,” the report said. “Post-accident examination showed that the right elevator’s geared tab’s inboard actuating crank and links had moved beyond their normal range of travel and became locked overcenter, effectively jamming the right elevator in a full-TED [trailing edge down] position.”

The captain noticed nothing unusual while conducting an exterior inspection of the airplane before the flight. Neither had the check airman, who performed a flight control check while the airplane was being taxied to the runway. Noting that the elevators are about 30 ft above the ground, the report said, “Although it is possible to see when an elevator is positioned full TED, [this] is not necessarily indicative of an anomaly because the elevators can freely move to that position under nominal ground wind.” Neither would a flight control check reveal a jammed elevator because the control column is linked only to the elevator control tabs.

Thus, the report concluded that “the flight crew’s preflight inspection and control check during taxi, which were performed in accordance with the procedure specified in the AOM [airplane operating manual], could not have detected the overcenter position of the right elevator geared tabs linkage or the resultant jammed elevator condition.”

About an hour before the pilots started the MD-83’s engines, high winds caused a power outage and prompted air traffic control (ATC) personnel to evacuate the airport traffic control tower. “The flight crew first powered up the airplane about 1236 [local time],” the report said. “They followed company procedures for operations at nontowered airports and used a cell phone to obtain updated weather information and ATC clearances.”

During their preflight planning, the pilots discussed the high, gusting wind conditions and the possibility of wind shear, and decided to conduct a maximum-thrust takeoff. They chose to use 139 kt as V1, 142 kt as VR (rotation speed) and 150 kt as V2 (minimum takeoff safety speed).

V1 is the basic element of takeoff performance planning. The U.S. Federal Aviation Administration (FAA) defines V1 in part as “the maximum speed in the takeoff at which the pilot must take the first action (e.g., apply brakes, reduce thrust, deploy speed brakes) to stop the airplane within the accelerate-stop distance.”3

However, the FAA and aviation safety authorities throughout the world concede that there are exceptions to this rule, based on the authority and responsibility of the PIC of an aircraft. For example, the Takeoff Training Safety Aid, developed by a global industry/FAA task force, states that pilots should consider V1 as “a limit speed” and should not attempt to reject a takeoff “once the airplane has passed V1 unless the pilot has reason to concluded the airplane is unsafe or unable to fly [emphasis added].”2

Moreover, the MD-83 AOM says that “a rejected takeoff above 100 kt should be made only for safety of flight items such as the occurrence of an engine failure or a condition where there is serious doubt that the airplane can safely fly.”

“Company guidance also stated that a high-speed rejected takeoff should be made only for safety of flight items, such as a condition where there is serious doubt that the airplane can safely fly,” the report said.

“By adhering to SOPs rather than reacting and taking control of the airplane from the captain trainee, the check airman demonstrated disciplined restraint in a challenging situation,” the report said. “Had the check airman simply reacted and assumed control of the airplane after the captain decided to reject [the takeoff], the results could have been catastrophic if such action were to further delay the deceleration (at best) or try to continue the takeoff in an airplane that was incapable of flight.”

About 15 seconds after the captain initiated the rejected takeoff, the MD-83 overran the 7,543-ft (2,299-m) runway. “The airplane was traveling about 100 kt when it exited the paved surface off the departure end of Runway 23L,” the report said. “It then traveled about 950 ft [290 m] across the grassy part of the runway safety area (RSA) before striking the airport perimeter fence and a raised, paved road before coming to a stop. The airplane came to rest on the fuselage belly with the tail on the road, about 1,150 ft [351 m] west-southwest of the end of the runway.”

After the airplane came to a stop, the check airman used the public address system to order an evacuation. The 110 passengers and six crewmembers evacuated through four of the MD-83’s eight exits. The flight attendants chose not to use the two overwing exits and were unable to use the right front exit because the evacuation slide did not inflate due to an improperly installed release cable. “Further, the tailcone exit door initially could not open fully due to a seatbelt buckle that became wedged under it, and passengers had used other exits by the time the flight attendant cleared the buckle and opened the door.”

Based on these findings, the NTSB concluded that “the probable cause of this accident was the jammed condition of the airplane’s right elevator, which resulted from exposure to localized, dynamic wind while the airplane was parked and rendered the airplane unable to rotate during takeoff.” The board’s report also said that factors contributing to the accident were “(1) the effect of a large structure on the gusting surface wind at the airplane’s parked location, which led to turbulent gust loads on the right elevator sufficient to jam it, even though the horizontal surface wind speed was below the certification design limit and maintenance inspection criteria for the airplane, and (2) the lack of a means to enable the flight crew to detect a jammed elevator during preflight checks for the Boeing MD-83 airplane.”

The NTSB made several recommendations, including that Boeing should develop a modification that will prevent the elevators on DC-9/MD-80 series airplanes and on 717s from jamming when exposed to high surface winds. The board also recommended that the FAA gauge the adequacy of current ground gust limit loads for transport category airplanes.

Cutting Back on Errors

SMS and FDM are among the most effective methods of assessing safety during flight, an NTSB aviation accident investigator says.

A B-300 crashed, killing 10, after the pilot failed to follow procedures for loss of engine power, the NTSB says.