Hearing — and understanding — the spoken word is crucial to safe flight. 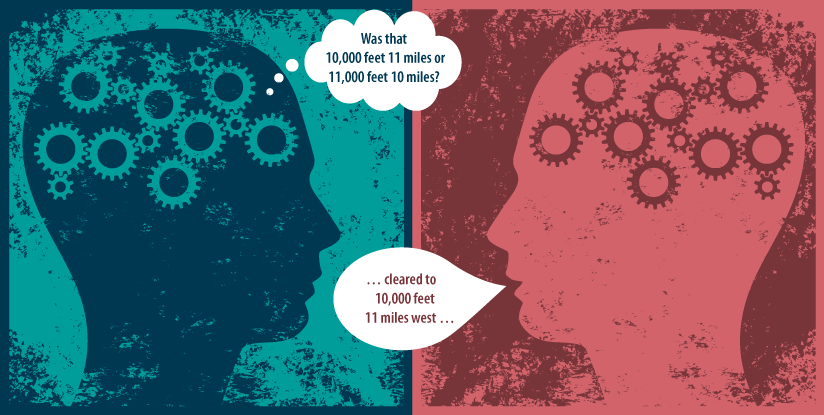 Three recent fatal accidents in the United States — an Airbus A300 controlled flight into terrain (CFIT) accident on short final in Birmingham, Alabama; a Boeing 777 crash into a seawall in San Francisco; and a midair collision over the Hudson River in New Jersey between a Piper PA‐32R and a Eurocopter AS350 — expose the limitations of a crucial component of human performance: auditory perception (see “Communication Errors That Led to Accidents” ).

Communication Errors That Led to Accidents

Several recent accidents underscore the role of auditory perception in aviation, including the following:

Like distortions in the visual modality (see ASW, 10/16, p. 25), distortions in auditory sensation (the receiving of stimuli) and perception (the interpretation of those inputs) can reduce safety margins by adversely affecting higher level cognitive functions such as decision making. Unlike the visual sense, auditory sensation is omnidirectional, enabling voice messages and aural warnings within hearing range to be detected. However, auditory inputs, such as verbal messages, are transient, can be forgotten and, like visual stimuli, are subject to misinterpretation.

In 1981, when researchers evaluated 28,000 incident reports submitted by pilots and air traffic controllers during the first five years of reporting to the U.S. National Aeronautics and Space Administration (NASA) Aviation Safety Reporting System (ASRS), they found that more than 70 percent involved problems with information transfer, primarily related to voice communications.1 Problems included incomplete and inaccurate content, ambiguous phraseology, absent communication, misperceived messages caused by phonetic similarities, untimely message transmission, garbled phraseology and lack of monitoring by the intended recipient.2
This article highlights some of the important factors that contribute to auditory misunderstandings on the flight deck, and suggests mitigation strategies to overcome them.

The recent International Air Transport Association (IATA) Phraseology Study found the use of non-standard and/or ambiguous phraseology by ATC was the biggest communication issue for 2,070 airline pilots surveyed.3 Ambiguous messages consist of words, phrases or sentences with more than one meaning. For example:

Numbers are particularly vexing, especially homophones (words that sound the same as other words), such as “two” (“to”) and “four” (“for”). Ambiguous usage or interpretation of these four words — cited as the second biggest communication problem identified by pilots in the Phraseology Study — was responsible for a fatal CFIT accident involving a Boeing 747 on final approach to Subang Airport, in Kuala Lumpur, Malaysia, in February 1989. The crew misperceived ATC’s clearance of “descend two four zero” (descend to 2,400 ft) as “to four zero” (descend to 400 ft).6

Since numbers can refer to a variety of parameters in flight — headings, altitudes, airspeeds, etc. — even non-homophonic numbers can be confusing. For example, after clearing a Learjet to “climb and maintain 14,000 feet,” the controller issued instructions to “fly heading two zero zero.” The pilot read it back as “two zero zero” then proceeded to climb to 20,000 ft.7

Ambiguity is reduced when pilots and controllers use standard terminology, including that developed by the International Civil Aviation Organization (ICAO) and published in Aeronautical Telecommunications (Annex 10, Volume II) and the Manual of Radiotelephony (Doc 9432).

Examples of standardization include the proper way to pronounce letters and numbers, common message transmission techniques, the use and meaning of standard words and phrases, and common ways for ATC to issue clearances.

Despite these radiotelephony (RTF) requirements, the use of non-standard phraseology was ranked as the number one complaint (along with ambiguous phraseology) by airline pilots in the Phraseology Study, with 44 percent of pilots experiencing non-standard phraseology at least once per flight. A variety of issues were identified, including improper use of the phonetic alphabet (e.g., “Nectar” instead of “November”) and using incomplete call signs or call signs not in conformance with ICAO standards.8

Disaster was averted in a 1974 incident involving a Boeing 747 on an approach into Nairobi, Kenya. Though cleared to “descend seven five zero zero feet” (7,500 ft), both pilots believed they had heard “five zero zero zero feet” (5,000 ft) and set their altitude alerter accordingly. However, that altitude was 327 ft below the airport height; fortunately, the aircraft broke out of the clouds in time for the crew to see the terrain and enter a climb. They came within 70 ft of hitting the ground.9 To avoid this type of confusion, most jurisdictions require altitudes (except flight levels) to include the words “hundred” or “thousand” as appropriate (e.g., “7,500 ft” should be spoken as “seven thousand five hundred feet”). Although the report indicated the clearance was given in accordance with international procedures, had the controller used the now-standard method of saying altitudes, the event likely would not have occurred.

The event points out a recurring problem: Pilots have difficulty interpreting messages with several “zeros” in them, especially with multiple instructions in one transmission.

Another problem — the “ten/eleven issue” — was illustrated by one pilot’s question to ATC: “Were we cleared to 10,000 feet 11 miles west of ARMEL, or 11,000 feet 10 miles, or 10,000 feet 10 miles, or 11,000 feet 11 miles?”10 The problem was reflected in a 1991 analysis of 191 ASRS reports, which described how crews overshot or undershot their assigned altitude by 1,000 ft. This “ten/eleven thousand foot” pairing was by far the most common altitude combination in 38 percent of altitude busts.11 The standard verbalization of 10,000 feet and 11,000 feet is “one zero thousand” and “one one thousand,” respectively. Since misinterpretations still occur, even with standard phraseology, U.S. controllers are now permitted to group digits: for example, “ten thousand” or “eleven thousand,” for 10,000 ft and 11,000 ft, respectively.12

Unfortunately, these regional attempts to clarify altitude messages may result in pilots of international flights receiving altitude assignments in non-standard ways. Standard RTF is most effective if applied globally. While progress has been made in harmonization — for example, the United States now uses ICAO terminology “line up and wait” instead of “taxi to position and hold” — there are still differences:

Mistaking one aircraft’s call sign for another is a perennial problem in aviation communications.

Clearances meant for one aircraft but accepted by the crew of another have led to altitude and heading deviations, near-midair collisions and accidents. For example, both occupants of a Piper Seminole died after it collided with rising terrain at 5,500 ft near the Julian VHF omnidirectional radio (VOR) in California in May 2004. The pilot accepted and read back a descent clearance to 5,200 ft intended for another aircraft with a similar call sign.15 A variety of patterns contribute to similarity of call signs and/or flight numbers — the main reason for call-sign confusion: identical final digits (ACF, JCF; 523, 923); parallel digits (ABC, ADC; 712, 7012); anagrams (DEC, DCE; 1524, 1425); and, block digits (ABC, ABD; 128, 128T).16 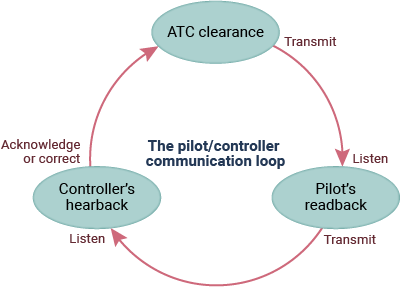 Accidents can occur if a pilot incorrectly reads back a clearance (the readback problem) and the controller doesn’t recognize it (the hearback problem). The pilots in the Kuala Lumpur accident and Nairobi incident inaccurately read back their altitude assignments and the controllers failed to catch and correct the mistakes. A breakdown in this feedback loop (Figure 1) often occurs when controllers are too busy to acknowledge the readback; unfortunately, pilots often interpret this silence as acceptance of their readback.

Pilots sometimes hear what they expect to hear. For example, a wide-body jet was cleared to FL 230 on a heading of 340 degrees, and because the flight plan called for a final cruising altitude of FL 340, the crew did not fly the heading because they interpreted the instruction to mean “expect FL 340.”17

Successful communication requires a common language: For international flight operations, that language is English. Communication errors are compounded when a non-native English-speaking pilot and/or controller is involved in the communication loop.

Strong regional accents can be difficult to understand, although once pilots gain more experience with different dialects, comprehension is less of a problem.18 A Challenger CL300 crew received the following clearance from ATC: “descend to 310, eleven at TIRUL.” Unsure of the clearance because of the controller’s strong accent, they asked him to repeat it. After receiving the same instruction, they began a descent to 11,000 feet at TIRUL intersection. As their airplane passed through FL 300, the controller informed them their assigned altitude was FL 310. The controller had been attempting to say “descend to 310, level at TIRUL.”19

Sometimes multilingual speakers switch between English and their mother tongue; or unilingual speakers may switch between different English dialects (e.g., aviation English and normal English). This code switching occurs for a variety of reasons, including the natural tendency to revert to previously learned behavior when under stress.21 Code switching may explain the otherwise confusing phrase “We are now at takeoff,” spoken by the Dutch first officer (FO) of a KLM Boeing 747 before it collided with a Pan American 747 on a runway at Tenerife in Spain’s Canary Islands in 1977, killing 583 people in the worst aviation disaster in history. The controller interpreted “now at takeoff” to mean the KLM flight was in position for takeoff; to the FO, using a mixture of English and Dutch grammar, “now at takeoff” meant the airplane was actually taking off.22

An extreme example of code switching is complete language switching. For example, both English and French are used in Quebec and the National Capital Region of Canada to communicate with ATC. Pilots who initiate radio communication in the French language will receive communication from ATC in that language, while ATC will communicate in English to those who initially use English. When asked if there was a procedure or a common practice used by pilots or ATC that causes misunderstanding or errors, the most frequently-mentioned concern of pilots in the Phraseology Study was “the use of mixed languages with international crews speaking English with ATC and the local crews speaking the country’s language.”23 Multiple parties communicating on a single radio frequency provide valuable party-line information that enhances pilot situational awareness by communicating the location of aircraft, runway information and other activities — information they might not otherwise receive from ATC. This party-line information is reduced when two different languages are spoken, when two or more different radio frequencies are used (e.g., joint civilian-military airports with mix of VHF and UHF frequencies) or when greater reliance is placed on controller-pilot data link communications.

Pilots should practice countermeasures designed to minimize miscommunication errors, some of which are listed below:

Dale Wilson is a professor in the Aviation Department at Central Washington University in Ellensburg, Washington, U.S. He teaches courses in flight crew physiology, psychology and risk management, and writes about flight crew safety matters, including co-authoring the recent book, Managing Risk: Best Practices for Pilots.

The BEA cited nonstandard terminology, and radio transmissions in another language, as factors in a 2014 runway incursion.

Please Don’t Let Me Be Misunderstood

Upset by a False Cue

Investigators say the CRJ flight crew was not prepared to respond properly to an abnormal pitch indication.