Please Don’t Let Me Be Misunderstood 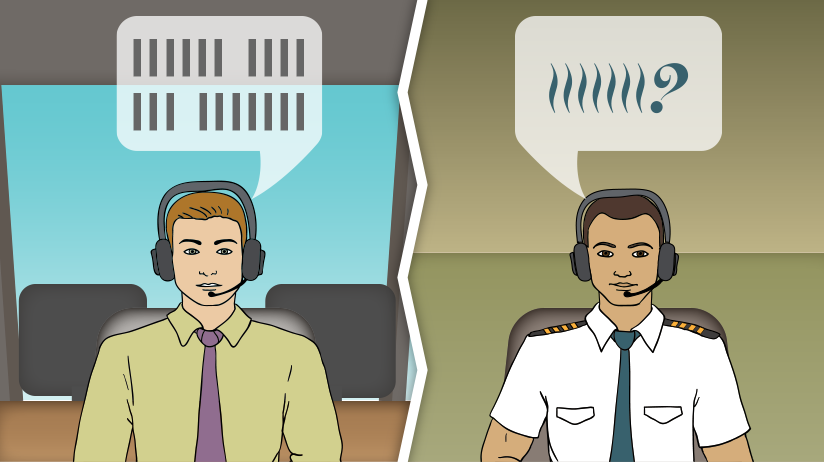 English language proficiency requirements for pilots and air traffic controllers are “not robust enough” to ensure clear communication, according to a study conducted for the U.K. Civil Aviation Authority (CAA) that found numerous instances of readback/hearback errors, call sign confusion and language-related loss of situational awareness.1

The study — conducted by Barbara Clark, a linguist, anthropologist and miscommunication physiotherapist — was based on a review of previous studies, reports in the CAA’s mandatory occurrence reporting (MOR) database and in the U.K. Confidential Human Factors Incident Reporting Programme (CHIRP), and conversations with teachers of aviation English.

“There are pilots operating inside U.K. airspace who appear to lack the minimum proficiency in English established by ICAO [the International Civil Aviation Organization],” said the report on the study, released in March. “Additionally, it is recognized that there are air traffic controllers operating outside of U.K. airspace who have contact with U.K. aircraft and who lack the minimum proficiency in English (see “Minimum Requirements”).

Pilots, air traffic controllers and aeronautical station operators must demonstrate at least Level 4 “operational” proficiency, which calls for vocabulary that is “usually sufficient” to communicate on work-related topics and comprehend discussion of those topics and to engage in exchanges “even when dealing with an unexpected turn of events.”

Level 4 proficiency also includes requirements for pronunciation and basic grammatical structure, and stresses that the person must “[deal] adequately with apparent misunderstandings by checking, confirming or clarifying.”

This lack of proficiency, along with other language-related miscommunication, “has the potential to be the cause of serious incidents or even accidents,” the report said, adding that such events have been avoided through training and layered safety precautions.

The report noted that the study — unlike most previous research on the topic, which was conducted from a U.S. perspective — focused on U.K. issues, reasoning that the United Kingdom “is a different civil aviation context. … Its proximity to Europe means that U.K.-based pilots and air traffic controllers will regularly interact with speakers whose primary languages will likely not be English.”

The report faulted the U.K.’s MOR reporting culture, calling for greater emphasis on the reporting of events in which language proficiency or language-related miscommunication is a factor. The report said MOR forms should include more specific questions about the role of language in the reported event, including whether the event could be attributed to use of non-standard phraseology, too-rapid speech, overly long controller messages or other language-related issues.

The document recommended new efforts to eliminate barriers to aviation English proficiency in non-native English-speaking controllers and pilots. Other recommendations call for working with ICAO to expand standard phraseology to be used in non-routine events such as laser strikes on aircraft and medical emergencies. ICAO member states also should determine whether the adoption of English as the sole language to be used in commercial aviation “represents the best approach to optimal situational awareness, radiotelephony communication and aviation safety,” the report said.

Future research should examine the role of cultural factors in language-related miscommunication, and also incorporate “awareness of politeness markers,” the report said, noting that earlier studies concluded that miscommunication can occur “when a speaker is perceived to be impolite or rude.”

Searches revealed 267 reports in the MOR database from January 2012 through June 2013 that involved miscommunication. Only four CHIRP reports from the same period were considered relevant, so they were excluded from the study’s overall analysis. 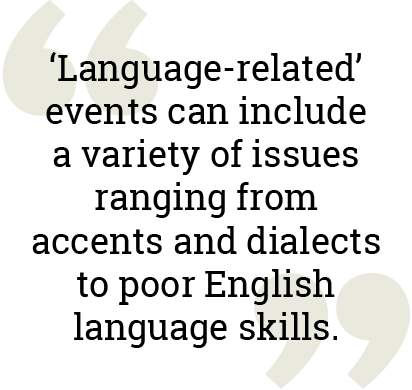 The report cited two possible explanations, adding that there may be more.

The report recommended that the CAA modify MOR forms to add a separate section on language-related miscommunication, emphasize the importance of reporting these events and clarify that “language-related” events can include a variety of issues ranging from accents and dialects to poor English language skills.

‘All Phases of Flight’

Of the 267 reports, 98 (37 percent) involved miscommunication or misunderstanding between a U.K.-based pilot and a non-U.K. air traffic controller — the most frequently cited combination of event participants.

“MORs show that language-related miscommunication between U.K. pilots and non-U.K. controllers is happening at all phases of flight, from starting to taxi, climb to cruise to descent and landing,” the report said, adding that most of the events occur in mainland Europe.

“Ultimately,” the report said, “responsibilities for communication problems in aviation language are distributed across both native and non-native English speakers. Thus, both native and non-native English speakers must accept responsibility for their utterances and ensure that they are speaking as clearly and concisely as possible.” 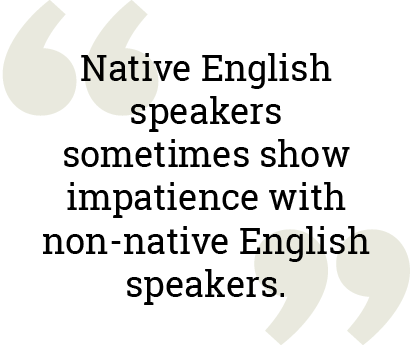 The report acknowledged that the U.K. pilots may have been partly responsible for the miscommunication, either through a rapid rate of speech, use of nonstandard phraseology or “excessive use of plain language in non-routine and emergency situations.”

The report recommended additional research, including research into the language proficiency of non-U.K. controllers, focusing on those in countries most frequently visited by British travelers. Other recommendations called for enhanced training of pilots and controllers to include strategies for improving communication among speakers with diverse language backgrounds and for “language awareness” training for native English-speaking pilots to encourage them to consider aviation English to be “not English as they know it but instead as a different ‘language.’”

Sixty-nine of the MORs (26 percent) involved miscommunication or misunderstanding between U.K. controllers and non-U.K. pilots, with all but one of the reports attributing the problem to the pilot’s substandard language proficiency.

The MORs lack the details to determine the pilots’ nationalities or the countries in which they were licensed, the report said, recommending collaboration by national authorities to develop ways of addressing these language-related challenges.

Among the examples cited were reports of “language difficulties” that complicated the resolution of an event in which chocks blocked a taxiway, and the operation of a commercial aircraft without a valid release to service following minor maintenance and a communication breakdown between the operator and the airworthiness organization.

“These incidents are not without consequence or threat to aviation safety,” the report said. “Inability to clearly communicate with mechanics or pushback crews can have major safety implications.”

A standard level of English language proficiency should be required for all ground personnel, accompanied by periodic proficiency checks, the report said.

Readback/hearback errors were cited in 55 MORs; errors were attributed to air traffic controllers in 42 cases and to pilots in 13 cases.

Numbers are a common factor in readback/hearback errors, and many of these errors involved use of incorrect call signs, incorrect flight levels or incorrect runways; the most frequent result of these errors was a deviation from an assigned altitude (level bust).

“Accent and substandard language proficiency also contribute to miscommunication,” the report said. “While these events were resolved without accident, they are not trivial: Any could have had much different consequences.”

Many of the errors were associated with stepped-on radio transmissions, controller distraction or “hearer expectation” (cases in which a person believes he or she has heard the words he was expecting to hear). Among the controller errors occurring outside the U.K. were miscommunication associated with the controller’s accent and multilingual RT in English and French.

In some cases, readback/hearback errors were associated with problems involving RT equipment (10 reports), including badly fitting headsets, noise on the radio frequency and poor quality transmissions.

“Because U.K. pilots and controllers are going to encounter and interact with speakers from outside of the U.K. whose native language is not English, it is imperative that they are well-trained and prepared to attune their ears to the range of accents that they will encounter,” the report said.

The document recommended adding instruction on understanding accents to classes in aviation English, as well as incorporating techniques into flight planning to familiarize pilots with accents they are likely to encounter during that flight.

The study supported “the assertions made by numerous aviation safety professionals and teachers of English for aviation that minimum levels of language proficiency, as set out by ICAO Document 98352  … are not fully present in international aviation,” the report said.

The literature review indicated a “lack of adherence to ICAO standards” that some blamed for causing confusion among pilots, the report added.

The document also noted that conversations with teachers of aviation English during the course of research revealed suspicions that Level 4 certification sometimes is given to people who do not meet Level 4 standards.

“The conclusions were based primarily on discussions with several teachers of aviation English “who spoke of their frustration over the noncompliance of some aviation professionals with ICAO LPRs [language proficiency requirements] yet who possess ICAO Level 4 certificates.”

Although earlier research revealed concerns that ICAO phraseology may be “inadequate for non-routine events, resulting [in] an over-reliance on plain language in highly stressful situations,” the report said that this is a lesser concern than issues such as call sign confusion for U.K. pilots and controllers.

Nevertheless, the MORs included 15 reports of miscommunication between pilots and controllers because of non-routine events; 11 of these reports involved events outside U.K. airspace between U.K. pilots and non-U.K. controllers.

The report characterized laser attacks as the most frequently reported non-routine event causing communication problems between U.K. pilots and non-U.K. controllers. Laser strikes in Casablanca, Morocco; Milan; Madrid, Spain; and Sharm El Sheikh, Egypt, were cited as examples of events in which controllers did not understand the problem being reported by U.K. pilots.

“In one event, U.K. pilots themselves warned other aircraft on frequency about the attack,” the report said. “The Madrid event required another aircraft to translate the event to the Spanish controllers.”

“It could be the case that some non-standard phraseology concerns have more impact on aviation safety than others,” the report added. “Phraseology which is ambiguous outside of the country in which it is used could be a significant threat to aviation safety, if not all persons share the meaning of such an ambiguous phrase. For example, the phrase, ‘What kind of service do you require?’ (used by some U.K. FISOs [flight information service officers] and controllers) may not be understood by non-U.K. pilots, causing confusion.”

The report recommended synthesizing CAA standard phraseology with that set forth by ICAO as much as possible and, in cases in which the CAA endorses different words, publicizing the difference with ICAO’s standards.

Experts say pilots and air traffic controllers who are not native English speakers may need refresher training in aviation English before they return to work.

Critical information is lost when all pilots and controllers aren’t speaking the same language.