For Lack of a Mask

The pilot was not using supplemental oxygen when the Citation’s cabin pressurization system failed at 43,000 ft. 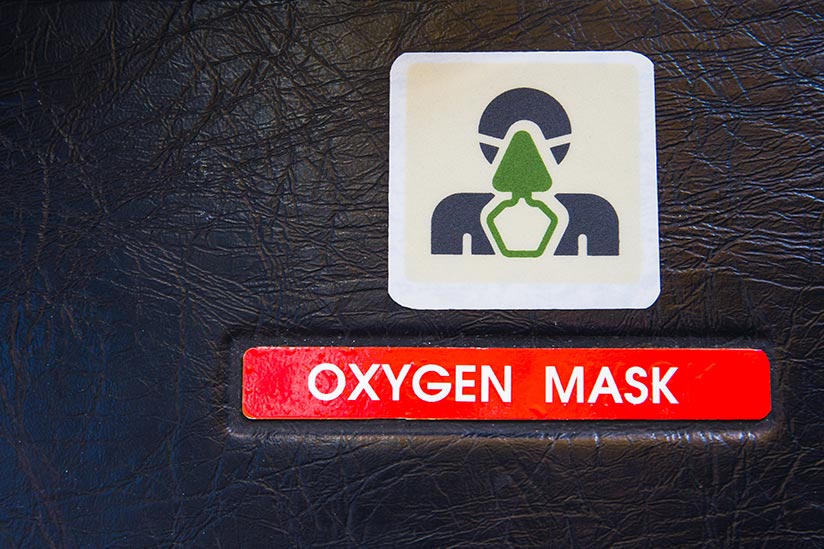 U.S. regulations require pilots to don and use their oxygen masks when they venture above Flight Level (FL) 350 (approximately 35,000 ft).1 If an aircraft should suddenly depressurize while flying at that altitude, the pilot’s time of useful consciousness, also called effective performance time, is 30 to 60 seconds, according to the U.S. Federal Aviation Administration (FAA). Effective performance time decreases as altitude increases. For example, it’s 15 to 20 seconds at FL 400 and 9 to 12 seconds at FL 450.2

The FAA stresses that these are average times and that effective performance time is affected by factors such as a pilot’s health and physical condition. Moreover, impairment of a pilot’s ability to make decisions and take action begins almost immediately following a rapid depressurization.

However, using supplemental oxygen as a proactive measure at high altitude often is neglected because of the unpleasant experience of wearing an oxygen mask and the rarity of cabin pressurization system malfunctions. Yet, as the following accident demonstrates, such events do occur.

The 58-year-old pilot was conducting a business flight with three passengers from Perryville, Missouri, U.S., to San Antonio, Texas, the night of May 23, 2016, according to the report by the U.S. National Transportation Safety Board (NTSB). The straight-line distance between Perryville and San Antonio was about 660 nm (1,222 km).

The pilot held an airline transport pilot certificate and ratings in helicopters and gliders. He had earned type ratings in several aircraft, including the Cessna Citation 501 and 650, Douglas DC-3, Gulfstream G-1159, Hawker 400 and several former military airplanes. He had about 15,000 flight hours, including about 5,000 hours in the accident airplane, a Citation 501 I/SP, in which he had earned certification for single-pilot flight.

The airplane was built in 1980 and had been extensively modified. The wing leading edges had been recontoured, and wing tip extensions had been installed, which allowed an increase of the airplane’s maximum takeoff weight from 11,850 lb (5,375 kg) to 12,500 lb (5,670 kg). Another modification included replacement of the original Pratt & Whitney Canada JT15D engines with Williams International FJ44-2A engines, increasing maximum continuous thrust from 2,090 lb (948 kg) to 2,300 lb (1,043 kg). Significantly, the new engines allowed an increase of the Citation’s maximum operating altitude from 41,000 ft to 43,000 ft.

Night visual meteorological conditions prevailed when the Citation departed from Perryville. The pilot conducted the takeoff and initial climb under visual flight rules. The airplane was climbing through 9,200 ft at 2056 local time when the pilot established radio communication with Kansas City Center. He told the controller that he had an instrument flight rules (IFR) flight plan on file. The controller issued a transponder code and cleared the pilot to proceed under IFR directly to San Antonio, as filed, and to climb to and maintain FL 230. The airplane entered instrument meteorological conditions during the climb.

The pilot subsequently was cleared in stages to climb to FL 320 and was handed off to Memphis Center. The Memphis Center controller instructed the pilot to navigate directly to the WACO VOR (VHF omnidirectional radio) and to conduct the MARCS9 arrival procedure to San Antonio International Airport.

At about 2120, the pilot requested an estimate of the cloud tops along the route. The controller said that the tops appeared to be at about 39,000 ft. The pilot then requested, and received, clearance to climb to FL 430 and was told to establish radio communication with Fort Worth Center.

Investigators later found two anomalies that likely caused the Citation’s cabin to depressurize. A worn retaining clamp had become loose on the primary duct that channels conditioned bleed air from the engines to warm and pressurize the cabin. The duct then separated from its flexible connection to the cabin. In addition, the lower half of the plastic butterfly flapper inside the safety valve in the aft pressure bulkhead had fractured. “Material analysis of the fractured flapper valve indicated the presence of progressive cracking and a loss of mechanical properties due to physical aging [and] exposure to atmospheric pollutants and oxygen,” the report said.

The pilot told investigators that cabin pressure differential decreased from 8.5 psi to 0 psi within 20 seconds. During that time, the cabin altitude climbed from 8,000 ft to the ambient altitude, 43,000 ft.

The pilot said that he was able to initiate a rapid descent before he and his passengers lost consciousness. After losing radio communication with the Citation, the Fort Worth Center controller asked an American Airlines flight crew to try to establish radio communication with the Citation pilot on the “guard” frequency (that is, the international distress frequency, 121.5 MHz). However, the airline crew was unable to hail the pilot on that frequency.

The report provided no specific information about the Citation’s descent. The transcript of air traffic control radio communications accompanying the report indicates that the pilot re-established communication with Fort Worth Center about five seconds after he reported level at FL 430. The pilot told the controller, “We had an explosive decompression. … We got it under control here now, and we’ll be leveling off shortly.”3 The report said that the pilot established level flight at 7,000 ft.

The controller said, “Just let me know whatever you need. … Do you need to go to Texarkana or somewhere to get yourself sorted out? Maybe Fort Smith?”

The pilot replied, “Aah, give us a few minutes here to figure this out, and we’ll get back to you.”

The controller then advised the pilot that there was adverse weather about 10 nm (19 km) ahead and that the weather appeared to be moving southeast. The pilot said that he was changing heading to the southwest. “We’re going to navigate over here to Texarkana and land there,” he said.

The controller told the pilot that Texarkana (Arkansas) Regional Airport was 35 nm (65 km) ahead and provided details from the airport’s current automatic terminal information service broadcast, which included 10 mi (16 km) visibility and scattered clouds at 9,500 ft. The controller advised the pilot that the active runway was Runway 13. The pilot said that he would conduct a visual approach to that runway.

The pilot landed the airplane without further incident on Texarkana’s 5,200-ft (1,585-m) Runway 13 at about 2220. Two passengers and the pilot had sustained minor injuries during the flight; the other passenger was not hurt. The report provided no details about how and when the two passengers and the pilot were injured. It did note that “the airplane sustained substantial damage to both wings due to the excessive aerodynamic loads incurred during the descent [and] recovery.”

The pilot told investigators that he was not wearing his oxygen mask when the cabin depressurization occurred. The Citation was found to have an adequate supply of supplemental oxygen, but the passenger oxygen masks had not deployed. “The airplane oxygen system supplies breathing oxygen to the crew at all times and to the passengers when required,” the report said. When set to “NORMAL,” the system causes the passengers’ oxygen masks to deploy automatically when cabin altitude reaches about 14,800 ft. In the “CREW” setting, however, oxygen flow to the passengers’ masks is shut off, and the masks will not deploy automatically. The pilot said that the system was in the “CREW” configuration during the flight.

Based on the findings of the investigation, the NTSB determined that the probable cause of the accident was “the pilot’s failure to use supplemental oxygen as required during high-altitude flight, which resulted in his loss of consciousness following a loss of cabin pressurization.” Contributing factors were “the separation of the air conditioning system’s primary pressurization duct and the subsequent failure of the aft pressure bulkhead check valve flapper due to progressive weakening from age.”

This article is based on U.S. National Transportation Safety Board Aviation Accident Final Report CEN16LA197 and associated docket material.

When the TBM 900 depressurized, the pilot had four minutes to save himself and his passenger. He did not use the time well.

Hypoxia prevented the pilot from understanding what the gauges were telling him.