Regulations presume that optimized full flight simulators will enable the extended-envelope training soon to be required of U.S. airline pilots. 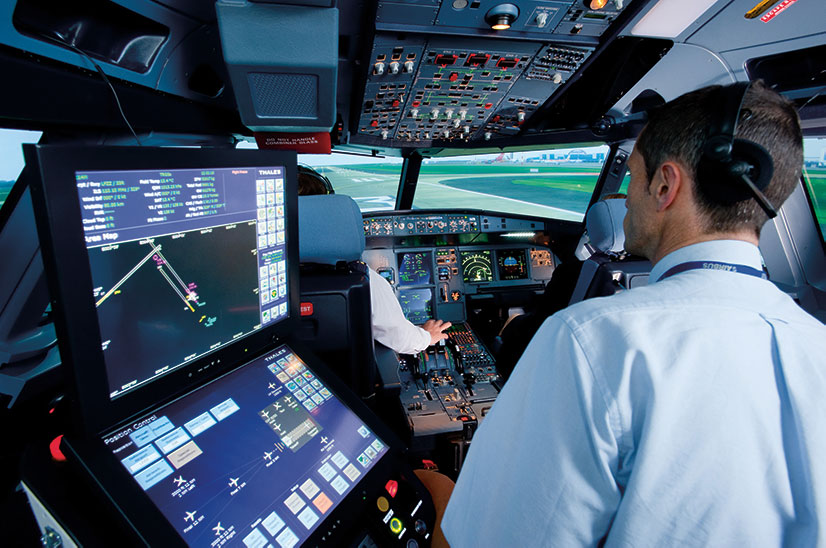 After several years of efforts to revise safety-related priorities in U.S. airline pilot training, the Federal Aviation Administration (FAA) and the industry have been cooperating to ensure the effectiveness of enhanced technological tools required by some of the additional content. Among these tools, the aviation community has clarified the necessary capabilities of flight simulation to be deployed — although some still are being refined.

National policy changes for this training began to take effect March 12, 2014, but some still are on the horizon, and must be implemented no later than March 12, 2019. Airlines and approved training organizations (ATOs) therefore have passed the one-year mark in what essentially is a five-year period of voluntary adoption. Although some requirements do not take effect in this period, associated regulations do provide airlines and ATOs details about expected technological capabilities — especially in full flight simulators (FFS) and other flight simulation training devices (FSTDs) used for training pilots and other aircraft crewmembers.

The documents should make it relatively straightforward for air carriers to plan steps/stages in their own pilot training programs — whether by a traditional structure (in Federal Aviation Regulations [FARs] Part 121, Subparts N and O) or by tailoring them using data-driven concepts and approvals from the FAA’s Advanced Qualification Program (AQP, Subpart Y). In the remaining four years, the policy especially will enhance all aspects of airplane upset prevention and recovery training (UPRT), a key aspect of reducing the risk of loss of control–in flight accidents, according to FAA (see “Technology’s Future Influence on Training”).

For interim use by these stakeholders between November 2013 and November 2014, the agency provided a document titled “Qualification, Service, and Use of Crewmembers and Aircraft Dispatchers,” and its provisions recently have been incorporated into regulatory amendments and are being incorporated into guidance material such as advisory circulars (ACs).1 The document said, “The FAA expects to revise or publish additional ACs in the future regarding stall prevention and recovery, upset prevention and recovery, remedial training, and other provisions for which compliance is required no later than March 12, 2019.”

The final rule on airline pilot qualifications, which became effective in November 2013, responded to statutory requirements and time frames set in August 2010 by the U.S. Congress, in a law titled the “Airline Safety and Federal Aviation Administration Extension Act of 2010.” The final rule derived from this law in part added training and qualification requirements for pilots in initial, transition, upgrade and recurrent training categories. The rule notably offered, effective March 12, 2014, opportunities for certificate holders to modify Part 121 training program requirements for pilots when the certificate holder operates multiple aircraft types with similar design and flight-handling characteristics, if the FAA administrator has designated the affected types as “related aircraft.”

The FAA’s implementation of the law also has taken into consideration voluntary training-related programs already in place at a number of airlines in relation to cumulative government-industry risk-reduction efforts. “Accordingly, the final rule … contains provisions that enhance pilot training for rare, but high-risk, scenarios, and that provide the greatest safety benefit,” the policy said.

FAA anticipated that many air operator certificate holders — now evaluating their own pilot training and that of ATOs in anticipation of some supporting technology yet to become available — would want to know, for example, if they could begin to revise their Part 121 pilot training program to include UPRT extended-envelope flight training even though the agency will not require compliance in this area until March 12, 2019.

In requiring compliance with this final rule, the FAA presumed that airlines by the 2019 final date will have adequate supporting technology to cover elements in the full scope of added training. The regulations specify, for example, the types of FFS required to be used unless the FAA Air Transportation Division authorizes an operator to deviate.2,3 The training encompasses the following elements: 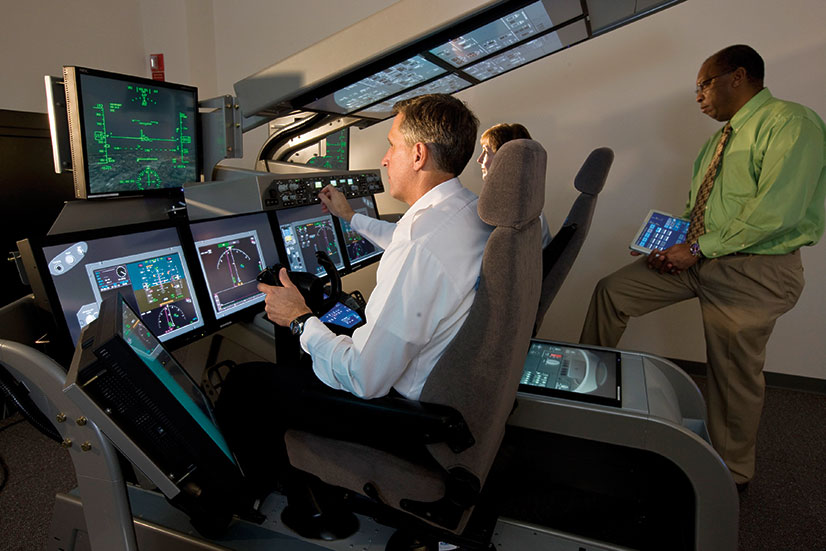 Under the current training policy, examples of FARs added or amended to require specific training equipment no later than March 12, 2019, include the following. Part 121.423 says “each training program must include extended envelope training for each pilot in a level C or higher FFS. The maneuvers and procedures must be completed every 24 or 36 calendar-months, as specified.”

Part 121.407, which aligns requirements for approval of airplane simulators and training devices in air carrier training programs with Part 60 requirements for evaluation, qualification, and maintenance, further specifies that an airplane simulator must be used to complete the pilot flight training requirements in Part 121.423. The term stall prevention is now used for the simulator-trained maneuver previously called approaches to stalls, and the simulator used therefore must be compatible, for example, with training pilots to initiate the approved recovery procedure at “the first indication of an impending stall (buffet, stick shaker, aural warning).”

Part 121.403 says “each training program curriculum must include a list of all the training equipment approved under [Part] 121.408.”

U.S. and non-U.S. experts4 discussed some relationships between the new scope of training and the availability of supporting technologies at a breakout session during the World Aviation Training Conference and Tradeshow (WATS 2014) in April in Orlando, Florida, U.S.

They noted that ICAO Doc 10011, Upset Prevention and Recovery Training, advocates a worldwide effort to continue and enhance airline/ATO training designed to prepare pilots to deal with developing and developed airplane upsets. Regarding simulators, the document says, “The use of FSTDs … complements the application of knowledge and techniques introduced through on-aeroplane UPRT at the CPL(A) [commercial pilot license] or MPL [multi-crew pilot license] level, [and] FSTDs can allow for practical skill development in upset prevention and recovery in a crew environment and with aeroplane-specific systems, instrument indications, control response and procedures.”

Among points relevant to U.S. carriers’ planning toward the FAA’s final training compliance date, the presenters told the attending airlines and ATOs, “Of major concern in the delivery of UPRT in FSTDs is adherence to the valid training envelope (VTE) for a particular device. Use of FSTDs in regions of the [airplane] flight envelope beyond the FSTD’s ability to provide accurate fidelity has the potential to introduce misleading concepts or inappropriate understanding of techniques which can result in a ‘negative’ training experience.”

To allay these concerns about adhering to valid VTEs, they noted the availability of expert consultation for training instructors about VTEs; IOS UPRT tools that depict VTEs; accurate information to counteract several training myths (such as that all maneuvers exceed VTE); correctly exposing pilots to both approach to stall and full aerodynamic stall; the proper emphasis on recovery; the role of on-airplane training to overcome gaps in FFS motion cueing at an early stage in professional pilot qualification; special UPRT instructor qualifications; creating a related risk-mitigation plan under a safety management system; and ensuring consistency of training with the Airplane Upset Recovery Training Aid, Revision 2 (Revision 3 has been drafted but not released; ASW, 3/15).

FAA’s Robert Burke at the breakout session noted that, as devices designed to provide the required FFS capabilities gradually gain agency qualification, airlines and ATOs will be able to conduct the extended-envelope training, as noted. This must include instructor-guided, hands-on experience of recovery from full stall and stick pusher activation, if equipped. Meanwhile, the ongoing rulemaking process to amend Part 60, he said, will address FFS fidelity, criteria for evaluating how an FFS simulates full aerodynamic stalls, FFS requirements for UPRT, and IOS instructor tools that identify the VTE. These and other related Part 60 standards will be in place to allow time for operators and ATOs to modify and evaluate FSTDs/FFSs before the final compliance date applicable to traditional airline training programs, the presenters said. 

What the future holds in airline pilot training technology can be glimpsed to a degree in today’s “smart” airplanes, says Dave Carbaugh, a captain and chief pilot, flight operations safety, Boeing Test and Evaluation. “We have the inherent capability in the machine now to understand, [for example, immediate go-around] parameters … so it’s only a matter of time [until] we can build algorithms … no different than LNAV [lateral navigation] and turn radius. [Automation would] figure out what your situation is, where you want to go, and when you select TOGA [takeoff/go-around] to go around, it’ll give you the right parameters: flight director, power, pitch. So if you [are at] low altitude, [the automation would command full power] to go around on a missed approach. Doing an [automated, high-altitude missed approach], it’s not going to be a full-power go-around, it’ll be something reasonable. I think we’re evolving to that.”

He predicted unofficially that automation especially could minimize some of the risk inherent in higher-altitude go-arounds, which few airline pilots practice or expect, by adjusting pitch attitude and power to do an appropriate go-around for the location. “We have very smart airplanes today, but in the go-around situation, [they] have very high power and flight directors that have a very high pitch rate, and they are all aimed at the at-minimums go-around,” Carbaugh said. “But [because we already] have the go-around altitude in the MCP [mode control panel] window, the airplane ‘knows’ what altitude it’s going around at, it ‘knows’ what altitude you are at [now], so I see the future airplane system being a little smarter than it is now.”

Panelist Harry Nelson, a captain and executive operational adviser to Product Safety, Airbus, said that the company’s Runway Overrun Prevention System similarly provides insights into what may come. “[My] natural instinct is if I’m anywhere near my go-around altitude, I don’t want [the autopilot], I don’t want TOGA, but you’ve got to go to TOGA on an Airbus certainly to generate the mode changes. [Airbus] generated a new procedure called the discontinued approach which … takes away all that button pushing and gives the pilot an option,” he said. “We’ll see some progression in that area in terms of managing the high-energy situation. My instinct about [automated go-around] is to be very reluctant. If I’m flying an approach with a ‘smoke airplane’ or an airplane with a fire, my workload is already high enough without having to handle an auto-go-around.”

Panel moderator Henry Donohoe, a captain and senior vice president–safety, Emirates Airline, had opened this discussion by asking, “Are we not at the point in aviation now where pilots are effectively systems monitors [and so should we] remove that ambiguity and create a technical solution where we take the [pilots’] go-around facility away so, if the gates are not met on the approach [by the flight crew], then [there’s] an automatic taking over of the go-around in whatever mode? … Maybe I’m not going for the full automated go-around, but a more simplified process [when an automated ‘soft’ go-around, depending on the scenario,] is required.”

Panelist Bill Curtis, a captain, subject matter expert for Presage Group and chairman of Flight Safety Foundation’s International Advisory Committee, said, ”At some point in time in the future, we are going to be systems monitors. We have to adapt with this. We have to retain our flying skills for a period of time that it’s important. But I also think that we have to be realistic that, at some point in time — in the extreme case, 100 years from now — we’re not going to need those flying skills. … We’re not at the same point in using stabilized-approach monitoring systems as we are with TCAS [traffic-alert and collision avoidance system] or EGPWS [Enhanced Ground Proximity Warning System] or TAWS [terrain awareness and warning system].”