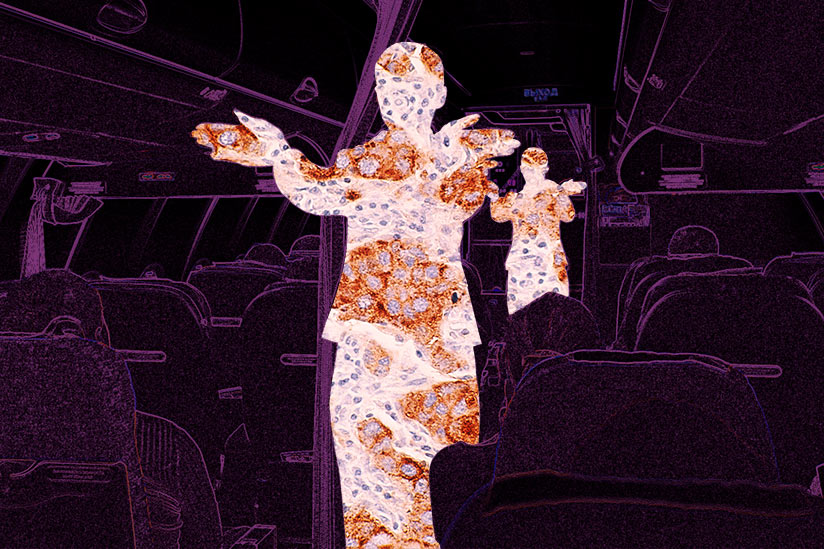 Flight attendants are contracting several types of cancer — including breast cancer and skin cancers — at elevated rates, compared with members of the general U.S. population, a team of Harvard University medical researchers says.1

The elevated cancer rates have occurred “despite low smoking and obesity levels indicative of positive health behaviors,” said the report, published online in the Environmental Health journal in late June.

The findings were based on a survey conducted in 2014 and 2015 of participants in the Harvard Flight Attendant Health Study (FAHS), which began in 2007 as an ongoing study to collect data on the effects of occupational exposures on the health of flight attendants.2

A 2014–2015 survey questioned 5,366 flight attendants, and compared the results with those of 2,729 people of similar socioeconomic status who participated in a separate 2013–2014 study — the National Health and Nutrition Examination Survey. 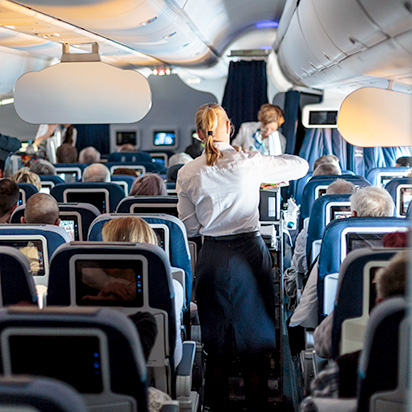 The comparison showed that the flight attendants “had a higher prevalence of every cancer we examined, especially breast cancer, melanoma, and non-melanoma skin cancer among females,” the report said. For example, among female flight attendants, the prevalence of non-melanoma skin cancer was about four times higher than it was for members of the control group, and for breast cancer, the prevalence was 50 percent higher.

The prevalence of other cancers — including uterine, cervical, gastrointestinal and thyroid cancers — also was higher among flight attendants, the report said.

The report said that the study was the first to detect an increase in non-melanoma skin cancer among U.S. flight attendants, adding that the finding was consistent with conclusions of studies of European flight attendants and pilots.

The research team noted that during workdays, flight attendants are routinely exposed to known and suspected cancer-causing agents, including cosmic ionizing radiation,3 disruption of their Circadian rhythms (their “body clocks,” or physical and mental changes that respond primarily to cycles of darkness and light in the human environment), and the poor quality of cabin air. Many also were exposed to secondhand tobacco smoke before smoking was prohibited in airliners in the United States in the early 1990s.

“The long-term health effects of this mix of occupational exposures, including with regard to cancers which develop over the course of many years, have not been well characterized,” the report said, noting that few previous studies have examined the prevalence of cancer among flight attendants.

Results of those previous studies have been mixed, the document said, but in general, they “point towards associations between in-flight exposures or job tenure as a flight attendant and increased rates of breast and skin cancers, as well as aggregated cancers at all sites.”

The report added that flight attendants’ exposure to ionizing radiation “is still not monitored or regulated in any way, despite the fact that cabin crew are exposed to the largest average annual effective dose relative to all other U.S. radiation workers [those who work with or near radioactive materials].” 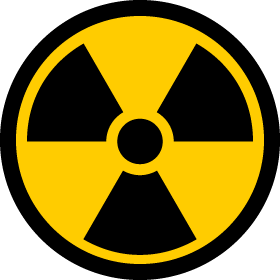 In addition, flight attendants were excluded until 2014 from workplace protections specified by the U.S. Occupational Safety and Health Administration (OSHA) to ensure safe working conditions. In 2014, they became subject to limited protections, including those designed to protect against exposure to blood-borne pathogens. Other OSHA protections typically do not apply.

The FAHS was begun in 2007 to address the scarcity of information on flight attendants’ cancers. Initially, the study compared cabin crew cancer rates with those of the general population and evaluated the effects of the length of time on the job with reports of the disease. That first study found elevated rates of reproductive cancers in female flight attendants and a link between length of time on the job and skin cancers; however, survey participants were not questioned about specific cancer diagnoses.

The 2014–2015 “second wave” of the FAHS distributed questionnaires to those who had participated in the 2007 study and recruited new respondents at five large airports around the United States and through a social media campaign.

The researchers “hypothesized that we would observe associations between work as a flight attendant and prevalence of reproductive, melanoma and non-melanoma skin cancers,” the report said.

Limitations of the Study

Other limitations included the self-reporting nature of the study, with validation through the examination of associated medical records not possible, and the selection of study participants from a combination of company rosters, social media and airport recruitment, the report said.

Study volunteers may differ from other study participants who are recruited through a random approach that considers a variety of factors, including socioeconomic status, attitudes toward health research and the time and ability to respond to online surveys, the report said.

The report said that the findings of the study may ultimately be applicable to passengers, especially to frequent flyers. The document described studies of flight attendant health as “sparse,” and the authors added that more high quality studies in this area are needed, especially because U.S. flight attendants “are subject to fewer protections than most workers in this country, and relative to flight attendants working in the European Union (EU).” For example, the report noted that EU requirements call for airlines to monitor radiation doses and organize flight attendant schedules to reduce radiation exposure, as well as to inform affected workers of current, relevant studies.

A review of the medical records of 20,000 Australian pilots shows that they apparently are at no higher risk of invasive melanoma than members of the general population, according to…

Study findings suggest that there is a direct effect of carbon dioxide on performance.