Wire strikes account for half of all aerial application accidents and serious incidents in Australia.

Accidents in Australia’s aerial application sector — agriculture spraying, spreading and firefighting — have inched up over the past three agricultural seasons to 16 accidents in 2015–16, the Australian Transport Safety Bureau (ATSB) says.

Aerial application has had the second-highest accident rate of all operation types in Australia — 154.8 per million hours flown, according to ATSB aviation occurrence statistics reported in the 2015 edition of the annual Aviation Occurrence Statistics (Figure 1). The highest rate was recorded for non-Australian–registered recreational airplanes, the ATSB said in Aerial Application Safety: 2015–2016 Year in Review. 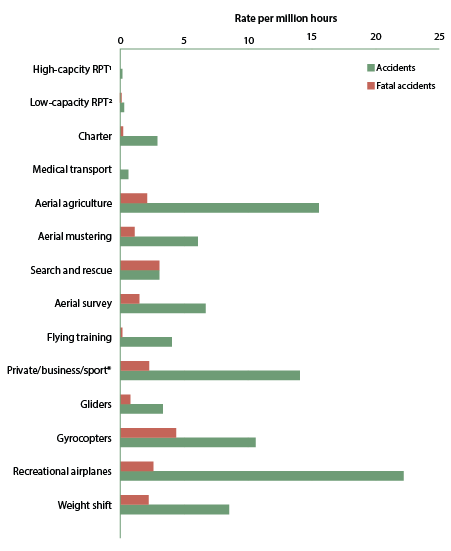 The fatal accident rate for aerial application was 21.1 per million hours flown, the report said.

The number of accidents recorded from May 2015 through April 2016 changed little from the previous season, the ATSB said, adding, “However, there has been a slight growth in accidents across the past three years (Figure 2). Longer term, it can be seen there are considerably [fewer] accidents each year in the past decade than in the preceding 25 years.”

The distribution of safety occurrences throughout the year has fluctuated with the seasons, the report said, noting that the highest numbers of accidents and serious incidents have been recorded in September, October and December, with the lowest numbers in June and July. 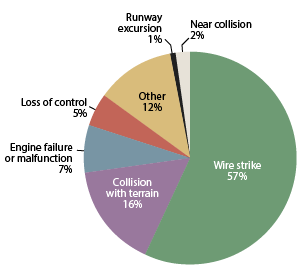 Over the previous 10 aerial application seasons, 73 percent of pilots involved in wire strike accident told accident investigators that they were aware of the wire before the aircraft struck it. Pilots involved in wire strike accidents and serious incidents had median experience of 4,800 flight hours; median flight hours on the aircraft type was 674 hours, the report said.

The ATSB said in a separate statement that pilots should be especially vigilant about wire strikes “with the crop spraying season ramping up as we move into summer, with reports of a particularly busy season for aerial agriculture.”

Hood said that five strikes were reported in the weeks before he issued a wire strike safety warning in early November.

“Aerial application operations are inherently risky,” he said. “They involve low-level flying, high workloads and obstacles such as power lines and uneven terrain. Pilots have a high workload to navigate these hazards and have a shorter reaction time if they encounter an issue and need to respond accordingly. But if pilots are working in areas of known wires, the hazard is manageable.”

The ATSB said the Aerial Application Association of Australia has held a series of air improvement meetings for members throughout Australia, with wire strikes as a focus of the meetings.

The ATSB said that it has joined with the association to develop strategies to help pilots manage wire strike risks, including “setting client expectations so that they are clear that safety comes first,” conducting thorough preflight briefings and studying a detailed area map before a flight, conducting aerial reconnaissance before spraying and before a cleanup run, and avoiding unnecessary distractions.