Hole in the Fuselage

A passenger was partially ejected when debris from an uncontained engine failure blew out a cabin window. 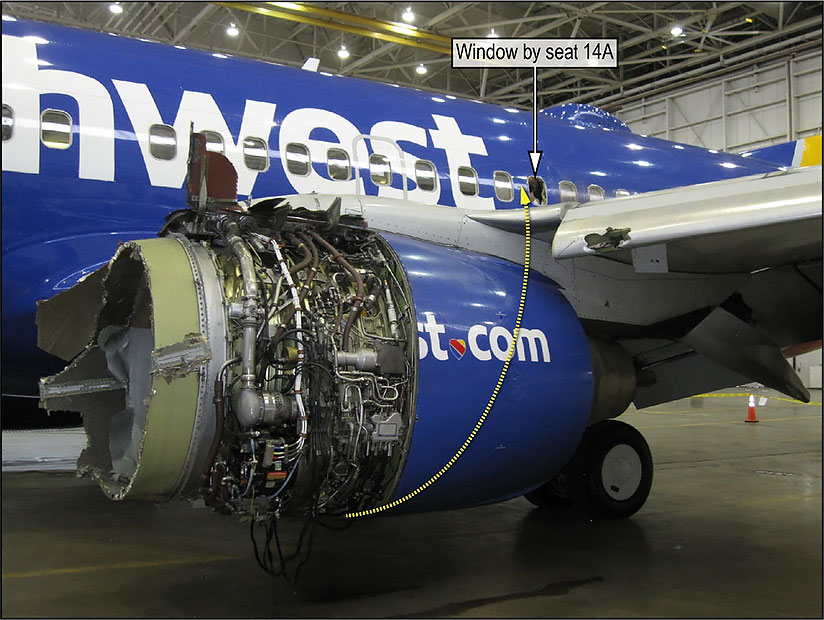 It began when fatigue cracks in the root of a fan blade were initiated by higher-than-expected stresses during normal engine operation. The cracks escaped detection during the repetitive fluorescent-penetrant inspections required at the time and ultimately led to the fan blade fracturing and precipitating an uncontained engine failure. A cabin window separated when shrapnel struck the airplane’s fuselage, and a passenger was killed after being partially ejected through the window frame. Eight other passengers sustained minor injuries during the rapid decompression. The flight crew diverted the flight to Philadelphia and conducted a successful single-engine landing.

The accident occurred during Southwest Airlines Flight 1380 from New York to Dallas the morning of April 17, 2018, said the report by the U.S. National Transportation Safety Board (NTSB). There were 144 passengers and five crewmembers aboard the Boeing 737-700 when it departed from La Guardia Airport. The captain, 56, had 11,705 flight hours, including 7,118 hours as a 737 pilot-in-command. She flew Vought A-7s and McDonnell Douglas F-18s for the U.S. Navy as well as forest fire fighting aircraft before being hired by Southwest as a 737 first officer in 1994. The first officer, 44, had 9,508 flight hours, including 6,927 hours in 737s. He flew Boeing E-7s for the U.S. Air Force before being hired by Southwest in 1998.

The 737 was climbing through 32,000 ft about 30 minutes after takeoff when the flight crew heard a loud bang and felt strong vibrations in the airframe. The cabin altitude warning horn sounded, indicating that the cabin altitude had increased above 10,000 ft, and the airplane entered an uncommanded left roll. The airplane rolled 41 degrees left before the first officer, the pilot flying, brought it back to wings-level. The crew then reduced thrust from both engines to idle, shut down the left engine and initiated an emergency descent.

The three flight attendants also had heard a loud noise and felt the airplane shaking. Debris was flying around the cabin when they retrieved portable oxygen bottles and donned their masks. The flight attendants then ensured that the passengers had properly donned the oxygen masks that had deployed from the cabin ceiling.

While donning their oxygen masks, the pilots had been momentarily confused about how to position the switch that would allow them to communicate through the microphones inside their masks. During this time, a New York Center controller attempted three times to hail the crew. The airplane was descending through 28,500 ft when the captain radioed, “Southwest thirteen eighty has an engine fire, descending.”

The report said that the crew’s decision to divert to Philadelphia was appropriate. Although the Harrisburg and Philadelphia airports were about the same distance away and had visual meteorological conditions, Philadelphia was a more suitable choice for an emergency landing because it had four runways, rather than one, and a higher level of aircraft rescue and fire fighting (ARFF) services.

The pilots told investigators that, during the emergency descent and diversion to Philadelphia, they focused on maintaining control of the airplane. “Maintaining airplane control was the most critical demand placed on the flight crew once the emergency situation occurred,” the report said. “Specifically, the crew had to control an airplane that had lost thrust on the left side and was simultaneously experiencing greatly increased drag on the same side because of the damage that resulted from the engine failure.”

The captain assisted the first officer in setting the trim controls. After ensuring that he had control of the airplane, she attended to checklist items prescribed in the quick reference handbook while communicating with air traffic control.

The New York Center controller inquired about the cause of the engine fire, and the captain responded, “Actually, we [have] no fire now, but we are single-engine.” After confirming that the airplane could maintain 11,000 ft, the controller cleared the crew to descend to that altitude.

“Do you need anything standing by on the ground?” the controller asked. The captain said, “You tell them [to] roll the trucks,” and advised that it was the left engine that had failed.

The 737 was descending through 17,000 ft at 280 to 300 kt when the captain established radio communication with another New York Center sector controller. She declared an emergency and obtained the local altimeter setting. Per company procedure for a single-engine landing, the captain assumed control of the airplane. “The first officer assumed the duties of the pilot monitoring and … began the ‘Engine Fire or Engine Severe Damage or Separation’ checklist,” the report said. However, the captain continued to handle radio communications with air traffic control.

A Philadelphia Approach controller cleared the crew to descend to 6,000 ft and then to 4,000 ft, and provided radar vectors to establish the airplane on a downwind leg for Runway 27L. “The controller asked whether the flight crew wanted a short or long final approach, and the captain replied that a long final approach would be needed … to allow time to accomplish checklists,” the report said.

The controller said, “I’m going to let you drive until you tell me you want to turn base,” and advised that the crew could expect at least a 25-nm (46-km) final approach to Runway 27L.

The first officer used the interphone to ask a flight attendant about the status of the cabin. The flight attendant said that all the passengers were seated but “we’ve got a window open, and somebody is out the window … I don’t know what her condition is, but the window is completely out.”

After the first officer told the captain about the injured passenger, the captain decided to expedite the landing, rather than conduct the previously requested long final approach. She reduced airspeed and told the approach controller that she wanted to turn toward the runway and to have emergency medical personnel meet the airplane on the runway. “We’ve got injured passengers,” she said.

“Injured passengers, OK,” the controller said. “And is your airplane physically on fire?”

“No, it’s not on fire, but part of it’s missing,” the captain replied.

Although the aircraft operating manual recommended that a single-engine approach be conducted with flaps extended to 15 degrees and at 160 kt, the captain decided to use 5 degrees of flap and 180 kt due to her concerns about the controllability of the airplane.

When the captain radioed that she had the airport in sight, the approach controller cleared the crew to conduct a visual approach to Runway 27L and to establish radio communications with the airport traffic controller. The controller cleared the crew to land and advised that the surface winds were from 280 degrees at 19 kt and gusting to 25 kt. The pilots used the instrument landing system to back up their visual approach to the runway.

The flight attendants repeatedly instructed the passengers to keep their “heads down” and to “stay down.” The pilots completed the “Before Landing” checklist before the airplane touched down on the runway at 1120 local time, or about 17 minutes after the engine failure occurred. “The airplane landed at a speed of about 170 knots and with the flaps at 5 degrees,” the report said. “Reverse thrust was used on the right engine.”

The captain turned off on a high-speed taxiway and stopped the airplane near the awaiting emergency vehicles. “The captain made a PA [public address] announcement to advise the passengers that a fire truck was approaching the left side of the airplane and that they should remain in their seats and listen to the flight attendants,” the report said.

ARFF personnel informed the pilots that there were no exterior signs of smoke or fire and asked if anyone aboard was injured. “The captain responded that there were injuries that needed to be addressed as soon as possible,” the report said. She then clarified that only one passenger needed immediate medical attention. ARFF said that buses were en route to transport the passengers to the terminal and that paramedics would be boarding the airplane to tend to the injured passenger.

The crew conducted the “Shutdown” checklist, and the captain went to the cabin to brief the passengers on deplaning procedures. She asked the passengers to clear the aisle while the paramedics evacuated the injured passenger, who was declared dead. The surviving passengers then exited the airplane on airstairs.

The fan blades are made of a titanium alloy; the dovetail portions are coated with a copper-nickel-indium alloy for wear protection. Each blade weighs about 11 lb (5 kg) and is about 11 in (28 cm) wide at the widest point of its chord.

All 24 fan blades were manufactured in 2000, operated together in an engine on another Southwest 737 and installed in the failed engine after being overhauled in 2012. “At that time, the overhaul process included conducting visual and dimensional inspections, stripping the dovetail coating from the blades to perform an ultra-high-sensitivity fluorescent-penetrant inspection (FPI), shot-peening the entire blade [to increase its resistance to cracking], and reapplying the dovetail coating,” the report said. After the overhaul, the fan blades accumulated 18,088 hours and 10,712 cycles.

When the accident occurred, the fan blades in CFM56-7B engines had no life limits. The manufacturer recommended relubrication and visual inspections of the dovetails at specified intervals “to maintain the fan blade loads within the predicted range and prevent wear on the fan disk and the fan blade dovetail coating,” the report said. The fan blades in the failed engine underwent the recommended process seven times after the 2012 overhaul.

“The number of cycles between each relubrication did not exceed the CFM-recommended interval at the time, and the fan blades had accumulated 1,704 cycles since the last relubrication,” the report said.

Metallurgical examination of the fractured fan blade revealed no surface anomalies or material defects. “The fracture surface had fatigue cracks that initiated close to where the greatest stresses from operational loads, and thus the greatest potential for cracking, were predicted to occur,” the report said. CFM determined that the stresses on the fan blade were higher than the peak stresses originally predicted.

The report said that the fatigue cracks likely were “most likely not detectable during the fluorescent-penetrant inspection at the time of the fan blade set’s last overhaul and subsequent visual inspections at the time of fan blade relubrications.”

After the accident, the engine manufacturer issued service bulletins requiring eddy current inspections during overhaul and ultrasonic inspections during relubrication of fan blades in CFM56-7B engines and removal of any blades found to be cracked. CFM also issued a service bulletin requiring in part that fan blades be removed from service before accumulating 55,000 cycles or before June 30, 2020.

The eddy current and ultrasonic inspections prescribed by CFM subsequently were promulgated as airworthiness directives by the U.S. Federal Aviation Administration (FAA) and the European Aviation Safety Agency (EASA).

Based on its investigation of the accident, NTSB issued several recommendations to the FAA and EASA, including a requirement for transport category airplane and engine manufacturers to work together to improve the structural integrity of engine cowls in the event of fan blade separations.