In It For the Ultra-Long-Haul 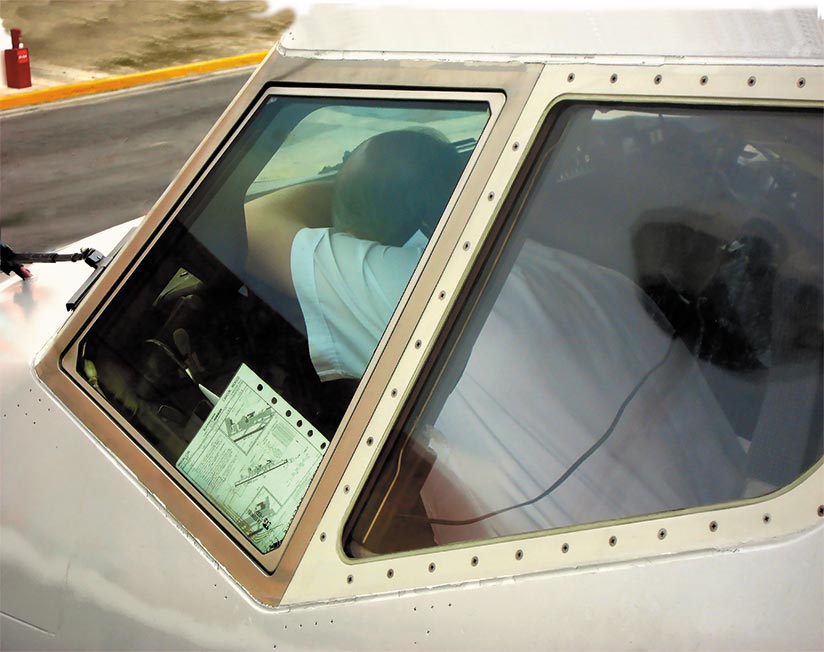 Although pre-flight naps were common among ultra-long-range (ULR)1 pilots participating in a 2012 sleep study, they nevertheless reported increased fatigue and sleepiness and a slowdown in performance during their flights, New Zealand researchers said.

In a report on the study, published in the December 2014 issue of Aviation, Space, and Environmental Medicine, the researchers, led by T. Leigh Signal of the Sleep/Wake Research Centre at Massey University in Wellington, examined the effectiveness of sleep recommendations and other fatigue-mitigation guidance material for 52 airline pilots operating on a westbound ULR flight and a slightly shorter, long-range, return flight.

The participating pilots, in four-pilot crews, completed a sleep/duty diary and wore an actigraph — a watchlike device that monitors rest and activity cycles — before, during and after their flights.

Within each group of four pilots, two were designated as the primary crew and operated the airplane during the departure and arrival phases of the three-sector trip — from Johannesburg, South Africa, to Kennedy International Airport in New York, and back to Johannesburg. The other two pilots were designated the secondary crew and flew the airplane only during cruise phases of flight.

Three days before their flights, crewmembers were given advisory information containing a recommended preflight/in-flight rest schedule, with the outbound flight separated into four rest breaks — of three hours, four hours, four hours and three hours — and with each crewmember receiving two breaks.

“It was advised that the second and fourth in-flight rest breaks be allocated to the primary crew to minimize the duration of prior wakefulness before operating the aircraft during the approach and landing phase of flight,” the report said. “Crewmembers were advised to nap on the day prior to departure of the outbound flight and to remain on domicile time during the layover. No recommendations were provided regarding the number or structure of rest breaks on the inbound flight.”

Fifty-eight crewmembers participated in the data-collection effort, but only 52 provided useable data, the report said. Those 52 included:

Data showed that while they were at home, the crewmembers obtained an average of seven hours of sleep in each 24-hour period. During the 24 hours before departure of the outbound flights, they averaged 34 minutes more; however, that sleep was considered of slightly poor quality, the report said.

After each sleep period — before, during and after their trips — the pilots were asked to rate the sleep quality on a scale from 1 (“extremely good”) to 7 (“extremely poor”). Fatigue was rated before and after each sleep period on the Samn-Perelli Crew Status Check (SP) scale of 1 (“fully alert, wide awake”) to 7 (“completely exhausted, unable to function effectively).” At those same times, sleepiness was rated using the Karolinska Sleepiness Scale, which ranges from 1 (“extremely alert”) to 9 (“extremely sleepy, fighting sleep”).

Their performance was assessed using a version of the Psychomotor Vigilance Task (PVT), which required them to observe a display on a smartphone and push a button when they saw a bulls-eye symbol appear. The response time was recorded.

More than half of the pilots — 14 from primary crews and 14 from secondary crews — napped between 0900 Johannesburg time and their duty start time before departing for New York, the report said. Of these, 36 percent had also napped on at least one of two previous days, and of those who did not nap, 17 percent had not napped during the two previous days.

“In contrast, responses from the pre-study questionnaire on the frequency of napping at home indicate that those who took a daytime nap at home often or always were not more likely to nap preflight in comparison to crewmembers who reported that they never, seldom or sometimes take a daytime nap at home,” the report said.

After the ULR flight, the pilots obtained about an hour more sleep during the first 24 hours, compared with their baseline sleep. This number does not include the naps taken by 11 crewmembers shortly after landing in Johannesburg.

Beginning the second day after their trips, the duration of sleep returned to the baseline level, but sleep efficiency faltered, the report said, noting that on the second and fifth days after the trips, sleep was about 3 percent less efficient. Crewmembers also were “sleepier and more fatigued after waking on the first post-flight day, compared to baseline,” and “significantly less sleepy on the fourth post-flight day,” the report said. 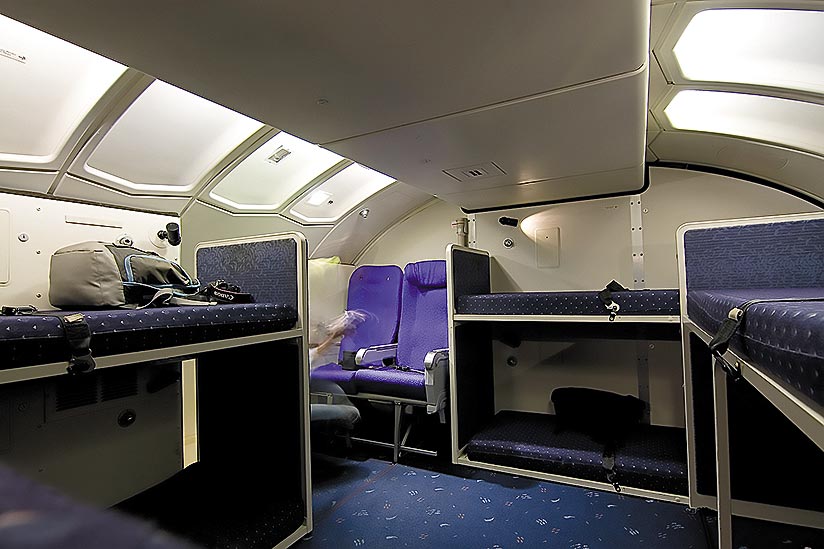 Analysis determined that the naps taken by 28 of the 52 crewmembers before their outbound flights had “no significant effect on the quantity … or quality of in-flight sleep … either in total or during the first rest break only,” the report said.

Overall, the SP and Karolinska fatigue ratings revealed “a pattern of gradually increasing fatigue across the flight, with slight decreases in fatigue following each in-flight sleep period,” the report said. “The same pattern was seen in ratings of sleepiness.”

In addition, the PVT response speed showed “a general pattern of slower performance across the flight, with the exception of primary crew on the outbound flight,” the document added.

On the outbound flight, the greatest number of ratings of 5 or more occurred before the second rest break; none of the primary crewmembers — those flying the airplane throughout the descent and landing — chose those ratings at the top of the descent.

Inbound, primary crewmembers again were most likely to rate their fatigue at 5 or more before the second rest break, and two assigned that rating at the top of the descent; secondary crewmembers were more likely to choose the 5 or more rating for the period after landing, the report said.

The document noted that these findings indicate that the recommended rest-break patterns were effective in achieving their goal of helping primary crewmembers reduce fatigue and sleepiness during the final phases of their flights.

The researchers concluded that their work showed that “a westbound ULR flight can be safely managed using a range of mitigation strategies, and that resulting fatigue levels are no worse than, and in fact, in many instances, better than the return non-ULR flight.”

For the crews on these flights, mitigation strategies included the augmented crews and the guidance material provided to the pilots about sleep before and during their trips, the report said.

“Advice to crewmembers regarding preparation for the flight (preflight napping) was implemented by half the crew, with the pattern of in-flight rest not appearing to drive the decision to nap (i.e., equal numbers of crew with the first and second rest break napped preflight),” the report said.

The document noted that the pilots who napped before the ULR flight apparently were slightly more likely than their colleagues to nap on other occasions; researchers did not know whether the pre-flight napping group also found it easier to sleep during in-flight rest periods.

Crewmembers did not follow one piece of advice — to remain on Johannesburg time during their layovers and not to adjust their schedules to New York time. Instead, all crewmembers delayed the start of their longest sleep periods on the second night of the trip until it was nighttime in New York.

“Crewmembers’ reasons for not adhering to the guidance material while on layover were not assessed as part of this study, but anecdotal reports suggest that social commitments and features of the destination (e.g., shopping and local attractions) may have driven the rapid shift to sleeping on New York time,” the report said. “As a consequence of the study findings, it was recommended that this aspect of the guidance material be amended. Instead of advising crewmembers to remain on domicile time, alternative approaches should be proposed for increasing the amount of sleep crewmembers obtain prior to departure of the inbound flight.”

Some of those alternatives might be to suggest that the pilots obtain as much sleep during that 24-hour period as they normally would while at home, perhaps by going to sleep earlier the night before departure on the inbound flight or napping during the afternoon of the second day of the layover, the report said.

Because the crewmembers generally adhered to the same pattern of rest breaks during the inbound flight — although the official guidance had offered no recommendations for rest scheduling — the strategy apparently was “at least in part effective,” the report said.

Overall, the report said that the researchers’ findings suggest that crewmembers typically recover quickly after a ULR trip. “Thus, having a minimum of four local nights off duty following a ULR trip, as per recommendations, appears to be sufficient for recovery,” the document added.

The researchers noted that, as recommended by Flight Safety Foundation in the early 2000s, they collected data for the entire trip.2,3

“Findings presented here suggest that guidance material on managing fatigue should cover ULR and non-ULR flights in a trip, as well as the time prior to and following the trip,” the report said. With the exception of managing sleep time during the layover, the pilots “applied the fatigue mitigation guidance material to good effect, with primary crew being advantaged in terms of fatigue, sleepiness and performance levels in both the outbound ULR flight and the inbound non-ULR flight.”