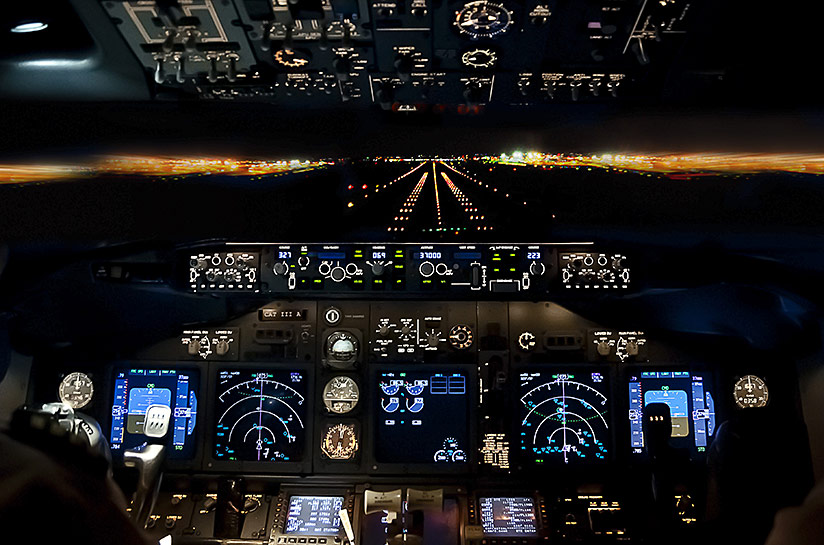 Visual perception is a crucial component of human performance, but shortcomings in this important stage of human information processing are especially evident during night flights when flight crews rely on outside visual references (see “Inadvertent Errors,” ASW, 10/16).

Some of these limitations arise from physiological factors that impede a pilot’s ability to see in the dark (Table 1). Most night-vision–related accidents, however, occur because pilots misperceive visual cues at night, especially on “dark nights” (those that are moonless and/or have an overcast sky). These perceptual errors manifest themselves during all phases of flight and are responsible for a significant number of fatal accidents.

Perceptual problems abound, even during airport ground operations. Reduced lighting, combined with the sea-of-blue effect created by the maze of blue taxiway lights, hampers a crew’s ability to safely navigate to and from the runway in the dark, increasing the probability of a runway incursion. For example, five of six fatal runway incursion accidents involving U.S. air carriers in the 1990s occurred during darkness (or at dusk) in visual meteorological conditions (VMC).1

During takeoff and initial climb, reduced ambient light has contributed to taxiway and wrong-runway departures in VMC. For example, a Bombardier Challenger crashed at Blue Grass Airport in Lexington, Kentucky, U.S., killing 49 of the 50 people aboard, as the crew attempted a takeoff on Runway 26 instead of Runway 22. The accident occurred in VMC about one hour before sunrise with no illumination from the moon.2

Since the vestibular apparatus in the inner ear is unable to distinguish between straight-line acceleration and head-up or head-down tilt, pilots who rely solely on external visual cues after takeoff on clear dark nights are susceptible to experiencing a false nose-up sensation, which could cause them to mistakenly pitch the aircraft’s nose down. This false climb (or somatogravic) illusion contributed to the crash of an Airbus A320 into the Persian Gulf, killing all 143 persons on board. The weather was VMC,3 but dark-night conditions prevailed over the water with no moon or external visual cues discernable.4

Pilots flying under visual flight rules (VFR) at night are at least three times more likely to experience an accident involving inadvertent flight into instrument meteorological conditions (IMC) than they would be during the day.5 Not only is it more difficult to visually detect adverse weather in the dark, but it also is difficult to see high terrain. While flying below the San Diego Terminal Control Area (now Class B controlled airspace), and waiting for an instrument flight rules (IFR) clearance, the crew of a Hawker Siddeley HS 125 flew into terrain near Brown Field Municipal Airport, killing all aboard: It was a clear, yet moonless, night, with visibility of 10 mi (16 km).6 The crew of an air ambulance Learjet flew into the same unseen terrain 13 years later. While flying under VFR at night below a cloud deck and awaiting an IFR clearance, the aircraft crashed within 1.5 mi (2.4 km) of the HS 125 crash site, killing all on board.7 This accident, and many others like it, prompted the U.S. National Transportation Safety Board (NTSB) to issue a Safety Alert in 2008 warning pilots of the dangers of night VFR flight.8

The probability of landing at the wrong airport increases when conducting a visual approach at night, even in good weather. For example, during a two-month period in 2013 and 2014, two aircraft — a 747 and a 737 —landed at wrong airports at night, prompting the NTSB to issue a safety alert that recommended modified air traffic control (ATC) procedures and cockpit software to guard against similar occurrences in the future.9 The flight crews of both aircraft had conducted their respective approaches relying primarily on outside visual references.10

Another concern is the likelihood of experiencing an illusion when conducting a visual approach after dark. The inability to see terrain on the approach, and the subsequent lack of optic flow (the rate at which objects in our peripheral vision flow past us as we move through space),11 means pilots must rely on runway shape and slope and atmospheric opacity to judge their approach angle.

Among the most common illusions is the black hole illusion. The absence of well-lighted terrain between the aircraft and the runway in dark-night conditions leads pilots to perceive that the approach angle is too high, causing them to fly too low. No single theory fully explains the cause of this illusion, but the most prominent explanation suggests that pilots attempt to maintain a constant visual approach angle, which results in a curved approach path and dangerously low approach (Figures 1 and 2).

A pilot unaware of a runway’s slope will instinctively adjust the approach angle to ensure that he or she sees that familiar shape. For example, on the correct approach to a downsloping runway, the low-approach image on the retina causes the pilot to perceive the approach angle as too low, resulting in a high approach with a possible long landing, runway overrun or stall above the runway (Figure 4).

Conversely, on the proper approach to an upsloping runway, the high-approach retinal image causes the pilot to perceive the approach angle as too high, resulting in a low approach with a possible hard landing or controlled flight into terrain (CFIT) accident short of the runway (Figure 5). An upsloping runway in Halifax, Nova Scotia, Canada, led both crewmembers of a Canadian Airlines 767 “to believe the aircraft was higher than it actually was” causing them to fly too low, resulting in a premature hard landing and tail strike, the Transportation Safety Board of Canada (TSB) said.12

Illusions also can involve runway dimensions. Research conducted in the 1980s confirms that pilots erroneously perceive an aircraft’s approach angle as too high when they are approaching a runway with a greater length-to-width (L/W) ratio that makes it appear longer and/or narrower than they are accustomed to. For example, a pilot who is accustomed to the runway dimensions on the left in Figure 6 is likely to experience a height illusion when approaching the runway on the right, with its higher L/W ratio. As a result, the pilot flies a lower approach.

An object of known size that casts a smaller image on the retina is correctly perceived as being farther away from the viewer, not smaller in size. This relative size cue may cause a pilot to misperceive a runway’s distance if it is larger or smaller than the runway they are most accustomed to. For example, the top runway in Figure 7 is half the width and length of the other but shares the same proportions (same L/W). At night, when surrounding visual cues are absent, a pilot accustomed to the bottom runway will likely construe the top one as farther away. If the brain interprets this illusion as an increase in vertical distance (altitude) the pilot will believe the approach is too high and fly a low approach; if the pilot perceives it as an increase in horizontal distance, he may delay the descent and end up too high on the approach.

Atmospheric conditions also can influence pilots’ perceptions. Since distant objects are normally less distinct than closer ones, a pilot may overestimate a runway’s distance in exceptionally hazy atmospheric conditions and underestimate it in exceptionally clear conditions. Similar illusions occur if runway lights are dimmer or brighter than normal: The former creates an illusion of distance (lights appear small and dark), and the latter, an illusion of closeness (lights appear large and bright). Different responses are possible, depending on whether the illusion is perceived vertically or horizontally by the brain. However, dimmer runway lights tend to contribute to late landing flare-outs and hard landings, while brighter lights have the opposite effect. 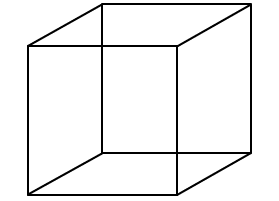 Pilots are vulnerable to visual illusions in conditions of visual ambiguity. In such conditions, an object’s image on the retina doesn’t lie, but sometimes the perceptual interpretation of it does. For example, the top right two-dimensional square in Figure 8 looks like it might be the front of a three-dimensional cube, but the next moment it may appear to be the back of the cube. But there is no cube: The lines are two-dimensional. The subconscious perceptual part of our brain wants to interpret it as three-dimensional, and since there isn’t enough contextual information to accurately perceive its orientation, the figure keeps reversing.

The following non-exhaustive list of best practice countermeasures should be implemented by flight crews to effectively compensate for the visual limitations that manifest themselves after dark.

The probability of an accident increases substantially when pilots rely too much on their visual ability to accurately perceive the outside world during the hours of darkness. Using these risk-reduction strategies will go a long way to reducing that threat.

Dale Wilson is a professor in the Aviation Department at Central Washington University in Ellensburg, Washington, U.S. He teaches courses in flight crew physiology, psychology and risk management.

Some of the content and illustrations used in this article are based on information provided in his recent co-authored book, Managing Risk: Best Practices for Pilots, and are used by permission from the publisher, Aviation Supplies and Academics.

Upset by a False Cue

Investigators say the CRJ flight crew was not prepared to respond properly to an abnormal pitch indication.

When the Mind Plays Tricks

The ongoing problem of spatial disorientation impacts all segments of aviation.