‘It Shouldn’t Do That’ 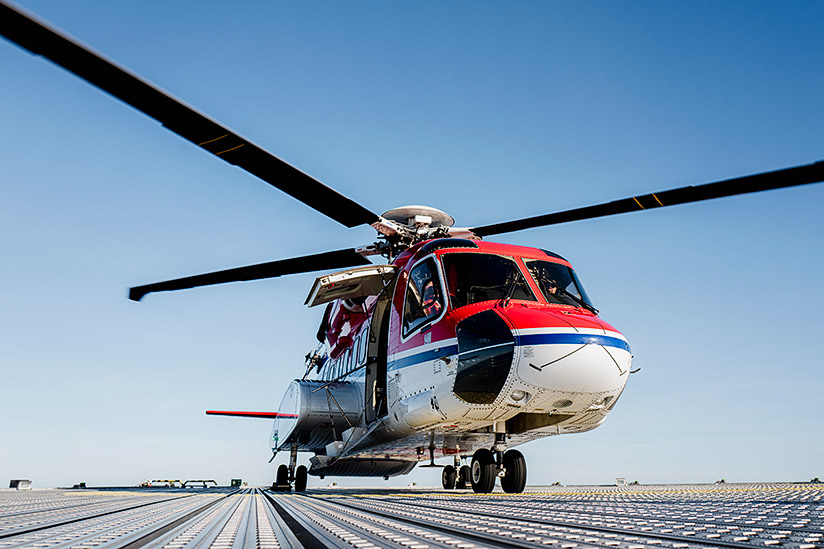 After an uneventful five-minute flight from one North Sea helideck to another, the Sikorsky S-92A pilot lost yaw control and the helicopter landed heavily on the platform deck, where it turned 180 degrees and stopped at the platform’s edge, according to the final report by the U.K. Air Accidents Investigation Branch (AAIB).

None of the nine passengers and two pilots was injured in the December 28, 2016, event, one of a cluster of accidents and incidents involving helicopters being flown in support of the offshore oil and gas industry.

In its final report, the AAIB cited two causal factors — the tail rotor pitch change shaft (TRPCS) bearing failed for an undetermined reason, and the bearing failure resulted in damage to the TRPCS.

A four-sector flight was planned on the day of the accident, beginning in Aberdeen, Scotland, where the helicopter had undergone scheduled maintenance the previous night. The first sector, from Aberdeen to the Elgin Process Utilities Quarters (PUQ), was described in the report as uneventful. Passengers disembarked and the helicopter was fueled for the remaining flight sectors.

As the helicopter — carrying nine passengers and a two-pilot crew — lifted off from the PUQ helideck, it unexpectedly yawed (that is, rotated around its vertical axis) right, from a heading of 270 degrees to 45 degrees. The commander applied full left yaw pedal and landed on the helideck.

“He told the co-pilot that he used full left pedal but [the helicopter] was turning right, and both commented that ‘It shouldn’t do that,’” the report said.

The commander began a second liftoff to check for the correct response to the flight controls; as he applied additional left yaw pedal, the helicopter turned left, and the crew determined that the control responses appeared to be normal.

“The crew briefly discussed what happened and commented on the wind direction,” the report said. “The commander described the event as ‘very strange’ … and the co-pilot concurred.”

They continued the departure from the PUQ helideck, climbing to 500 ft for the flight to the West Franklin wellhead platform, 3.3 nm (6.1 km) south. En route, the commander said that he “thought there was something wrong with the tail rotor there,” and the co-pilot described the event as “a bit strange because with anything, the nose should have come left. … We’ve got the wind off to the left.”

The conversation ended as they prepared for the landing on the West Franklin helideck.

“The helicopter made a normal approach and deceleration … and crossed over the edge of the helideck,” the report said. “At approximately 4 ft above the helideck, it yawed rapidly to the right, reaching a maximum rate of 30 degrees per second. At the same time, it rolled [rotated around its longitudinal, or front-to-back, axis] 20 degrees to the left, at which point the left main landing gear contacted the helideck. It continued to yaw to the right on its left main wheels and nosewheels before the right mainwheels contacted the surface. The co-pilot closed the throttles before the helicopter came to rest on a heading of 041 degrees, having rotated through 187 degrees.”

The airline transport pilot had 8,785 flight hours, including 243 hours in S-92s. He had worked for the operator for 11 years, flying Airbus Helicopters AS 332s and EC 225s in North Sea operations until August 2016, when he completed conversion training in the S-92A.

Both pilots had previously flown to the Elgin PUQ and West Franklin helidecks.

The maintenance engineer who reviewed the health and usage monitoring system (HUMS) data held a valid license with an S-92 type rating and authorization certificate. He had worked for the operator since January 2015, and had completed the operator’s multi-point competency check in July 2015, as well as a human factors refresher course and an S-92 integrated mechanical diagnostics HUMS course.

The helicopter, manufactured in 2014, had accumulated 1,776 airframe hours. It was maintained by the operator in accordance with the authorized Aircraft Maintenance Manual and manufacturer’s recommendations.

On Dec. 27, 2016, the night before the accident, maintenance personnel conducted a routine 50-hour check, along with post-flight inspections.

The maintenance engineer in charge of the work had first conducted a daily maintenance check on another helicopter, and then, around 1700 local time, he was contacted by police about an attempted break-in at his garage, near his home in Aberdeen. He left work to meet with a police officer, who told accident investigators that he “appeared upset and showed signs of distress” during their meeting, the report said. When he returned to work an hour later, he “said nothing in particular about the incident, and his colleagues assumed the matter had been closed,” the report said.

At that point, he and an assistant began post-flight maintenance on the accident helicopter, as well as a 50-hour check and a download and preliminary analysis of HUMS data.

HUMS vibration data showed that during a flight the day before the accident, “a series of exceedences” were recorded involving the TRPCS bearing, the report said.

When the maintenance engineer examined the HUMS data card on the ground station, he noted that the graph of tail rotor gearbox (TGB) bearing energy “did not appear normal,” the report said. He asked the opinion of another licensed engineer, but after they “could not get the zoom function to work,” they decided the apparent abnormality might be the result of a software problem. Nevertheless, the engineer was “uncomfortable with the abnormality and made a mental note to draw it to the attention of his supervisor later, prior to completing the electronic documentation and release to service.”

He completed the remaining work on the accident helicopter and returned to the HUMS ground station to finalize his paperwork, but he forgot to inform his supervisor of the abnormal indication. The helicopter was then released to service.

After the helicopter was landed on the West Franklin helideck, the operator asked the maintenance engineer, who was then off duty, to report to work as soon as possible to discuss the S-92’s “serious TR [tail rotor] problem,” the report said.

“Whilst on the journey to work, he realised what the problem might be and its relationship to the abnormality with the energy tool he had seen the night before,” the report said. “He arrived at work upset and distressed, realising his mistake, recalling that he had completely forgotten to inform his supervisor of the HUMS graph anomaly the night before as he had intended. He immediately informed the managerial staff what had happened but could offer no explanation as to why the matter had ‘slipped his mind.’”

Accident investigators said that if the engineers had been able to successfully zoom in on the flight data, the exceedences “would have been clearly visible.”

Before the accident, the pilots were unaware of the HUMS exceedences and had no reason to suspect a problem with the helicopter, the report said. They attributed the uncontrolled yaw during takeoff from the Elgin PUQ to either misjudgment of the wind direction and speed or “tricky” design of the helideck. However, the report said, “the evidence of the degraded state of the bearing which led to the subsequent failure of the TRPCS suggests that this first yaw event was related to the bearing degradation.”

Indications were that the bearing had been subjected to “severe overheating whilst under load,” the report said. However, the report noted that damage to the bearing destroyed whatever evidence would have identified the cause of the bearing failure.

The bearing failure was compounded when the maintenance engineer forgot to report the HUMS data problem to his supervisor, the report said.

“During discussions after the accident, [the engineer] used the well-known phrase, it ‘slipped my mind.’ This is a very familiar predicament and has been a factor of many accident and incidents,” the report said, characterizing the forgetfulness as an example of failure of prospective memory — remembering in the future to perform a specific planned action.

“Prospective memory is susceptible to failure, usually due to distraction; for example, being absorbed in a task … where something else is competing for attention to the extent that the mental note is lost,’ the report said. “The absence of a specific physical reminder leaves a reliance on the ‘mental note,’ which is fallible.”

In this case, the maintenance engineer made a mental note to discuss the HUMS data anomaly with his supervisor but forgot, probably because he was concentrating on checking safety-critical items before completing his maintenance tasks and partly because he had been distracted by the attempted break-in at his garage. In addition, the report said that because his shift was ending, fatigue might have been a minor contributing factor.

The accident followed the breakdown of multiple safety barriers, the report said, adding, “The design and certification had not foreseen the unusual mechanism of the TRPCS failure, and although the HUMS had detected an impending problem, that [safety] barrier, which required an engineer to correctly interrogate the software to display the exceedance, failed due to the limitations of human performance and the design of the HUMS GS HMI [human machine interface]. …

“The final barrier could have been that of flight crew intervention. However … they had no knowledge of, or access to, the detected HUMS exceedences [and] an opportunity to discontinue the flight was lost. The potential cue of full left pedal travel had not previously been identified by the manufacturer, and a review is being undertaken to determine whether this information should be incorporated in the RFM [Rotorcraft Flight Manual].”

After the accident, the operator reviewed all of its HUMS data as well as its HUMS analytical procedures and began requiring a second licensed maintenance engineer to conduct an additional assurance check before a helicopter is released to service.

The manufacturer issued All Operators Letter CCS-92-AOL-16-0019, emphasizing the use of the HUMS TGB Bearing Energy Tool, included on the HUMS ground station, to identify degradation of a TRPCS bearing. Other actions included calls for inspections of the TRPCS and bearing assembly, a review of the HUMS TBG Bearing Energy Tool and development of a temperature sensing plug to be retrofitted to TRPCSs to determine fleet-wide trends, the report said.

As a result of the investigation, the AAIB issued safety recommendations calling on the European Aviation Safety Agency (EASA) to facilitate research into the acquisition and processing of vibration health monitoring data and to require the near-real-time analysis of the data so that the flight crew can be made aware “at least before takeoff and after landing” of any exceedences.

This article is based on AAIB Aircraft Accident Report 1/2018, “Report on the Accident to Sikorsky S-92A, G-WNSR; West Franklin Wellhead Platform, North Sea, on 28 December 2016.”