Runway excursions presented the greatest risk of an accident or serious incident in the past two years for operators of commercial air transport airliners in European Aviation Safety Agency (EASA) member states, according to a risk-scoring method used by the European Commission.

The European Risk Classification Scheme (ERCS), as outlined in the EASA Annual Safety Review, 2017, showed that runway excursions accounted for 14 high-risk occurrences over the two-year period — more than were reported in six other categories (Figure 1). Over the 10-year period examined in the report, one fatal accident resulted from a runway excursion, the report said. 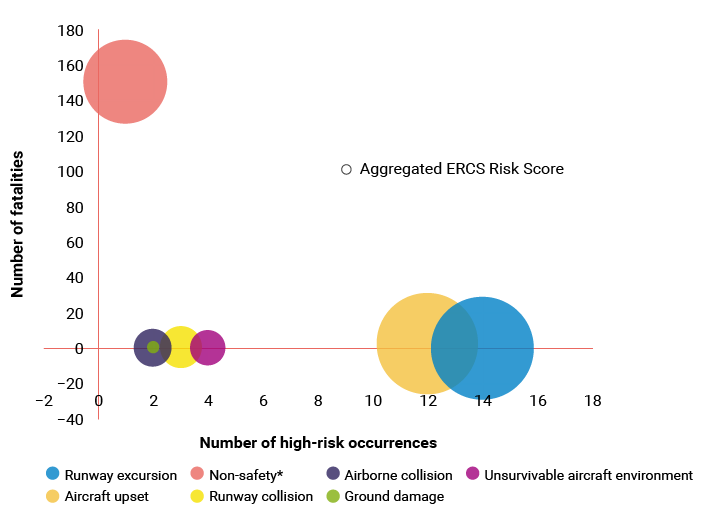 Although aircraft upset (loss of control–in flight) was the most common type of fatal accident over the 10-year period — with six fatal accidents reported in that time frame — its ERCS score for 2015–2016 placed it second, behind runway excursions, with 12 high-risk occurrences.

The objective of the ERCS, as explained in the Safety Review, is “to facilitate the identification of high-risk occurrences and the identification of areas of concern in the aviation system. For this second purpose, one of the possible strategies is to aggregate the risk score of the individual occurrences. The indicator obtained by this addition is not a risk estimation per se, but a parameter that reflects how far those occurrences were from the worst possible outcome, thus allowing a common reference point for comparison.”

ERCS comparisons also showed that “non-safety” events — those resulting from actions that were intended to “disrupt the normal operation of the aircraft,” including terrorist action, hijacking, shoot-down and laser interference — resulted in more fatalities in 2015–2016 than any other type of event.

In its analysis of key risk areas, the report ranked the top safety issues involving commercial air transport airliners “by counting high-risk occurrences or the number of fatalities or through the aggregated risk score.” At the top of the list was “perception and situational awareness,” followed by “icing in flight,” “handling of technical failures,” “turbulence” and “airborne conflict.”

Assessing the safety performance of all areas of the industry, EASA Executive Director Patrick Ky said that data showed “continued improvements in safety in almost every operational domain.”

Nevertheless, he noted that a fatal cargo accident in Sweden “highlighted the complex nature of aviation safety and the significance of addressing human factor aspects in further reducing accidents” and a fatal helicopter crash off the Norwegian coast “shows the importance of joining forces and together maintaining safety as an aviation community.”

The report said two fatalities occurred in European airline operations in 2016, both in the year’s only fatal commercial air transport airliner crash — the Jan. 8 accident involving a Bombardier CRJ-200 cargo flight near Akkajaure, Sweden (“Upset by a False Cue,” ASW, 4/17). In comparison, the annual average number of fatalities for the 10-year period that ended in 2016 was 66 (Table 1), and the average annual number of fatal accidents, 0.8.

In the category of special operations airplanes — those engaged in activities other than commercial air transport operations, such as agriculture, construction, photography, surveying, and observation and patrol — six fatal accidents and 12 fatalities were recorded in 2016. Annual averages for the 2006–2015 period were 10.7 fatal accidents and 16.5 fatalities.

For the first time since 2013, a fatal accident was recorded involving an offshore helicopter; it occurred April 29 in the North Sea off the coast of Norway and killed all 13 passengers and crew in the Airbus Helicopters EC225 Super Puma. The investigation of the accident by the Accident Investigation Board Norway is continuing. Fatal offshore helicopter accidents averaged 0.4 per year over the 10-year period, with an average of 3.0 fatalities per year, the report said.

In a separate section on drones — also known by a number of other terms, including unmanned aircraft systems (UAS) and remotely piloted aviation systems — the report said 15 nonfatal accidents and seven serious incidents occurred in EASA member states in 2016 (Table 2). During the five years from 2011 through 2015, the annual average was 2.6 nonfatal accidents and 0.3 serious incidents.

Overall 606 occurrences “of all severity levels” were reported in the last five years, the report said, adding, “The collection of data on UAS occurrences is still in its infancy and there is still a lot of work to be done to ensure the correct application of taxonomy terminology related to UAS. … However, the increase in the number of nonfatal accidents and serious incidents demonstrates mainly the rapid development of drone operations.”