Passengers who formulate an escape plan after boarding a helicopter improve their chances of surviving a water landing. 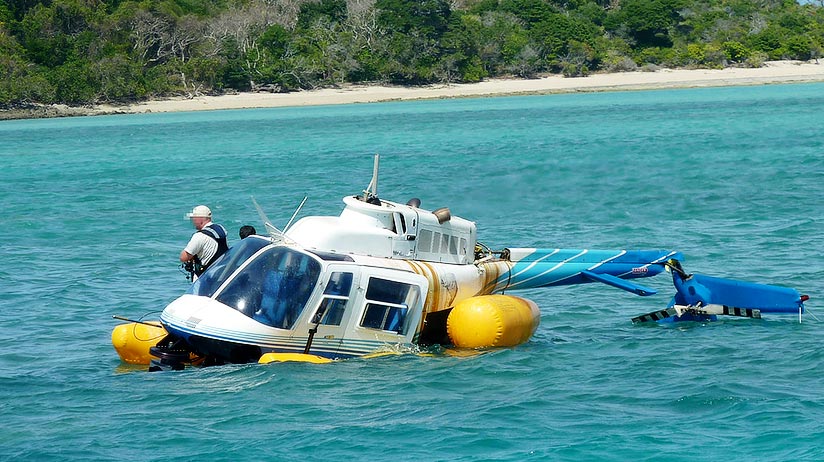 Many deaths stemming from helicopter ditchings and crashes into water in recent decades were preventable, according to a Canadian research report, which says lives could be saved if everyone boarding a helicopter for an overwater flight complied with a range of mental and physical preventive actions.1

Some of those actions include taking a preflight look around the helicopter cabin for obvious obstructions, reviewing door-jettisoning procedures, identifying the location of the life vest  and — for frequent travelers — enrolling in a helicopter underwater escape course.

The report, published in the April issue of Aerospace Medicine and Human Performance, said that a review of accident data for a 50-year period found that if a helicopter landed (crashed or ditched) in water during daylight, about 25 percent of passengers and crewmembers were killed. If the accident or ditching occurred at night, the risk of death tripled, the report said.

The authors said that they deliberately did not distinguish between crashes and ditchings because, “as far as the passengers are concerned, one minute they are sitting comfortably strapped in their seats, alive and well. Then, seconds later, they find themselves in the water in a life-threatening situation, irrespective of the classification of the accident.”

They cited 2014 research in which the U.K. Civil Aviation Authority concluded that the chance of a passenger being killed during a random helicopter flight over the North Sea was 10 times higher than for a passenger in a commercial jet. Another study found that, between 1990 and 2007, overwater nighttime accidents occurred five times more often in helicopters than in commercial jets. The earlier research showed that the most frequent cause of death for these passengers was drowning.

“Why are the statistics so gloomy?” the report asked. “There are several reasons; the first is that helicopters do not glide well. If there is an in-flight problem, and because the flights are generally low level, there is little time to prepare for the ditching. In most events, there is less than 15 seconds of warning time before the crew and passengers find themselves in the water. This gives the occupants little chance to take a good breath before their heads go under water.”

The impact with the water is terrifying, the report said, adding that one pilot likened it to “being hit in the chest with a fire hose.”

After the impact with the surface, a helicopter has a 50 percent chance of filling with water and quickly sinking, often inverted, the report said.

“Even if the helicopter safely lands upright on the water, it is balanced very precariously while the survivors start to make an escape from the cabin,” the report said. “Then what happens? The crew and passengers now find themselves disoriented in the pitch black, underwater with the helicopter still just floating upright, but more likely on one side or inverted.”

The report noted that escaping from the cabin is complicated by numerous factors, including the possibility of drowning, especially for those who had no time to take a deep breath before finding themselves underwater, and disorientation, for those seeking the nearest exit and trying to jettison emergency windows and doors.

If the water is cold, with a temperatures below 15 degrees C (59 degrees F), a typical reaction is cold shock. “The powerful stimulus from rapid skin cooling immediately upon immersion causes a deep inspiratory gasp, severe hyperventilation and a massive increase in blood pressure and heart rate,” the report said.

Even after a successful escape from the helicopter, the crash survivor faces new obstacles such as locating and donning a life vest and boarding a life raft.

“Unfortunately, the history of life raft performance in helicopter accidents is not good,” the report said. “The life raft may not be deployed and sink with the helicopter, it may have been damaged in the accident and rendered useless, it may be inflated inverted and no one has the physical strength to right it, or it can be simply blown up against the side of the fuselage and it may not be possible to board it. Even if the life raft inflates successfully, it takes extreme effort for those not trained to get into it from the water. Under such circumstances, the crew and passengers may have to abandon the life raft option and swim to shore or other rescue vessel.”

Without a life raft, survivors of a crash or ditching face the prospect of having to swim in cold water. The distance a person can swim in cold water typically is only about a third the distance they cover in warm water, the report said, noting that even the best swimmers are limited to about 45 minutes before they encounter swimming failure, which is associated with rapid cooling of their nerves and muscles. Even with a life vest, most people can swim no farther than 800 m (about half a mile) before drowning, the report said.

The authors, who noted that medical professionals often are asked by their patients if overwater flight are safe, said that health issues may intensify difficulty in the water.

“Passengers who have serious cardiac risk factors may not survive the cold shock if the flight is over cold water,” they said. “Those with respiratory problems may not have enough breath-holding ability to make their underwater escape; those with serious physical disabilities or very large body size may not be able to squeeze out of the small escape exits; and none may have the strength to climb into the life raft or swim very far.”

Advice to patients with medical issues suggested that it might be best to postpone the flight or to make alternate travel arrangements.

“Remember that if one of these patients becomes incapacitated on board and is occupying a seat next to an exit, he/she puts the life of other passengers in jeopardy by blocking that exit,” the report said.

The report outlined a series of actions intended to enhance helicopter passenger safety, beginning with noting the seat arrangements and obvious obstructions between the seats and an exit. Passengers should try to sit next to an emergency exit or next to an exit that adjoins a window seat, the report said.

“Once seated, before you do up your harness, take a look at the window/door and the jettison method (i.e., pull tab, lever, push out),” the report said. “Create a mental and physical schema by feeling for the window sill, the mechanism, or the place where you have to push to jettison the window, and note how far you have to reach. Recycle your harness release mechanism to make sure you can find it in the dark when you are potentially underwater and drowning.”

The tail of the seat belt’s lap strap should be tucked inside the belt at the passenger’s waist, the report said, adding that, if not tucked in, it would float across the harness’s release strap and prevent the wearer from locating the flap and releasing it.

If the passenger next to the exit has been seriously injured, he or she will be unable to jettison the exit; in that case, other passengers must go immediately to another exit.

During flights over cold water — 15 degrees C or less — passengers who regularly fly on the job typically wear survival suits and life vests. Vacationers and others who fly infrequently probably will not wear life vests but should note their location in the helicopter — usually under the passenger seat.

Because accidents can occur during all phases of flight, passengers must be alert and prepared for ditching at any time in the flight, the report said.

“On the command ‘ditching, ditching, ditching,’ assume the best brace position that you can for whatever type of harness that is fitted … and try to make your body profile as small as possible so that you are less of a target for the in-rushing water and debris flying around the cabin,” the report said.

This reduces that possibility of disorientation, the report said.

“After the accident, as soon as all the bubbles and movement have stopped, the survivor sits up out of the crash position, still with the left hand firmly gripping the edge of the seat,” the report said. “Then the right hand feels for the escape exit jettison lever, pull tab or push-out corner of the window, and activates it, pushing out the exit. Then the right hand transfers to the edge of the open window sill and takes a firm grip on it. That is the direction the survivor is going to take.”

The passenger bends to the right, catches the edge of the window sill with the left hand and squeezes through the exit, the report said. (The procedure is reversed if the exit is on the left side of the helicopter.)

Other recommendations, included in a 2004 report by Flight Safety Foundation on overwater flight operations, said that all passengers and crewmembers must know how to brace for impact, that all should know that a life vest should never be inflated inside a helicopter “because the bulk and buoyancy can prevent escape and the vest could be punctured,” and that procedures for ditching must ensure that occupants exiting the helicopter are protected against still-turning main rotor blades.2