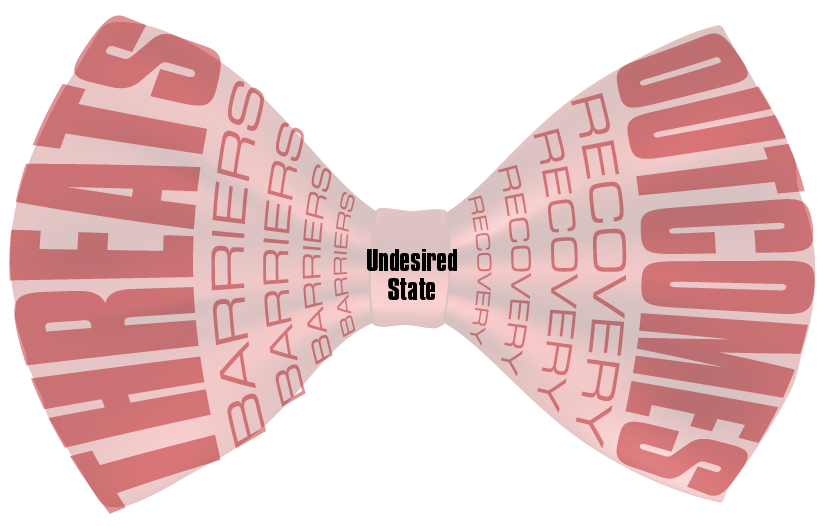 It is commonly, if not universally, held that efforts to enhance aviation safety benefit from the sharing of information within departments, across organizations and among industry and government stakeholders encompassing a variety domains, including airlines, air navigation service providers (ANSPs), manufacturers, suppliers and regulators. But sharing data outside of an organization is complicated by a host of factors, including the difficulty of standardizing data and taxonomies across multiple companies and the need to protect proprietary data from potentially inappropriate use.

A diverse group of commercial aviation stakeholders is working on an initiative that will enable the sharing of safety knowledge and experience to enhance overall industry risk management and safety efforts without requiring organizations to share internal data.

The purpose of the Common Aviation Risk Models (CARM) effort is to build a collaborative, international consensus around a set of bow-tie based risk models that “capture (and continuously update) our best understanding of the key risks to aviation globally,” says the CARM 2018 action plan.

According to Tom Lintner, president and CEO of The Aloft Group, a U.S.- and Ireland-based consulting firm, CARM initially was the idea of Bob Dodd, a risk management expert and retired airline safety executive who works with Aloft. “He approached Terry [Eisenbart, Aloft executive vice president] and me and said why don’t we set up something for the good of the industry,” Lintner said.

CARM was founded at an industry conference in Ottawa, Canada, in 2016. It is a voluntary effort for which Aloft does the administrative work and does not receive compensation. CGE Risk Management Solutions, a provider of barrier-based risk management solutions, maintains the CARM bow-tie server, which houses a database of bow-tie diagrams. Some of the bow-tie diagrams were created and shared by CARM member carriers and others were developed by CARM working groups. Other organizations involved in CARM include Air France, Air Transat, Delta Air Lines, American Airlines, Lufthansa Group and Nav Canada.

In August 2015, the CAA published “CAA Strategy for Bowtie Risk Models,” in which it described the bow-tie process as “a methodology to proactively identify and manage weaknesses in the aviation system so that resources can be focused in the most efficient way.”

The idea behind CARM is to share knowledge and not data or proprietary practices, Lintner said. When the CARM working groups meet to discuss such topics as unstable approaches and mitigations, “no one cares about how many unstable approaches, they want to know how you mitigate them,” he said. CARM helps shift the focus from incidents to risk.

The plan is to develop a suite of bow-tie diagrams covering all operational phases.  The models would provide an improved methodology for risk assessment by states and service providers; a common risk classification structure that supports more detailed and diagnostic monitoring of risk in critical areas; and development of improved safety risk performance measures, according to CARM documentation.

Often, when organizations implement bow-tie based risk management, they start too small, Lintner said, and then the pendulum swings too far to the overly complicated before it settles into a sweet spot. By starting with a set of common models, future users could save themselves as much 18 months of experimentation.

Once the bow-tie models are implemented, organizations can study the barriers to see what is working and identify and address barrier failures, Lintner said.

He sees the CARM development process, which includes working group and larger meetings, as an ideal opportunity for industry stakeholders to have open conversations around safety issues without the historic reluctance to share data.

In a paper published in 2015, Aloft’s Dodd said, “On a global basis, CARM becomes the place where risk understanding can be captured and incorporated continuously. It moves the process away from the existing one-shot accident/investigation/actions process to a global learning ‘engine.’”

It should come as no surprise that one of the most crucial elements of a safety management system (SMS) is safety risk management (SRM). SRM is a process by which…

A New Way to Measure

United Airlines recently was given credit in a Wall Street Journal article for performing safety analysis that is saving the airline millions. The article speaks about how the idea for this…