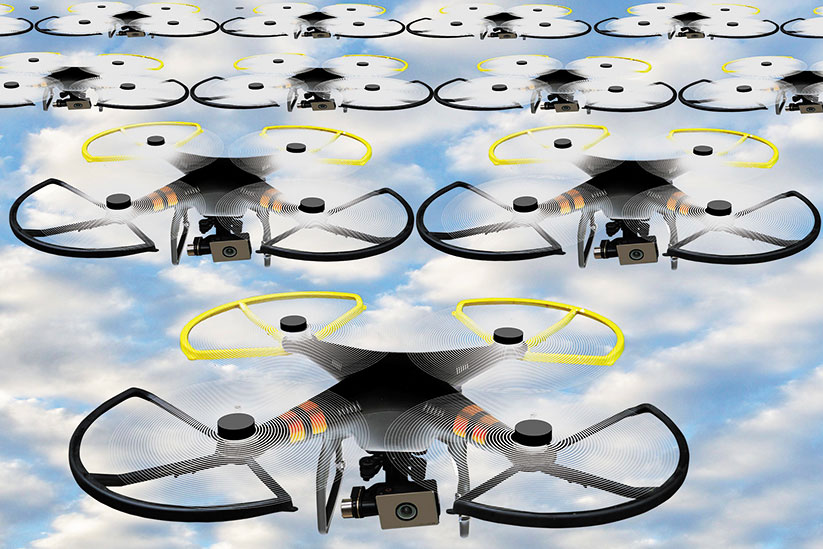 Laying the groundwork for the expanded use of unmanned aircraft systems (UAS) for non-recreational purposes, the U.S. Federal Aviation Administration (FAA) has proposed safety rules to govern operations of small UAS — those weighing less than 55 lb (25 kg).1

The FAA plan, which was outlined in a notice of proposed rule making (NPRM) published Feb. 23 in the U.S. Federal Register, would, among other things, limit flights of small UAS to daylight hours, within the visual line-of-sight of their operators.

The package of proposed rules is intended to allow “the routine use of certain small UAS in today’s aviation system while maintaining flexibility to accommodate future technological innovations,” the agency said.

The FAA will accept public comments on the NPRM until April 24. To further encourage public input, the agency plans public meetings to discuss “innovation and opportunities” at six existing UAS test sites across the country and at a planned UAS Center of Excellence, which will focus on research and training on UAS-related issues. At press time, the FAA had not announced meeting dates and places or a location for the center.

To date, the FAA has provided for limited use of non-recreational UAS, primarily through the issuance of special airworthiness certificates or certificates of waiver or authorization (COA). These typically have been issued to government agencies for law enforcement, firefighting, border patrol, search-and-rescue flights and other purposes. More recently, the FAA has granted regulatory exemptions for operators engaged in aerial surveys, construction site monitoring, oil rig flare stack inspections, aerial photography and video production.

The NPRM opens the next phase of incorporating UAS into the U.S. National Airspace System (NAS).

The FAA envisions that the UAS aircraft that would be operated under these regulations would be used for a variety of purposes, including crop monitoring and inspection, research and development, educational and academic endeavors, power line and pipeline inspections, antenna inspections, bridge inspections, search-and-rescue operations, aerial photography, and evaluations of wildlife nesting areas.

“Because of the potential societally beneficial applications of small UAS, the FAA has been seeking to incorporate the operation of these systems into the … NAS since 2008,” the NPRM said, noting that in that year, the agency established the small UAS aviation rulemaking committee (ARC), responsible for developing recommendations on how small UAS could be incorporated into the NAS. The ARC issued its recommendations in 2009, and the FAA said it has been working on the NPRM ever since.

“Technology is advancing at an unprecedented pace, and this milestone allows federal regulations and the use of our national airspace to evolve to safely accommodate innovation,” Transportation Secretary Anthony Foxx said in announcing the NPRM.

FAA Administrator Michael Huerta added, “We have tried to be flexible in writing these rules. We want to maintain today’s outstanding level of aviation safety without placing an undue regulatory burden on an emerging industry.”

Because of size, if a small UAS aircraft is involved in an accident, it presents less risk to people and property on the ground, and “as such, a small UAS operation whose parameters are well defined so it does not pose a significant risk to other aircraft would also pose a smaller overall public risk or threat to national security than the operation of a manned aircraft,” the NPRM said.

Nevertheless, the document added, because the aircraft are unmanned, there are two unique safety concerns, including whether the operator would be able to see the UAS aircraft’s position relative to manned aircraft in time to prevent a midair collision.

Anti-collision technologies used by manned aircraft — such as traffic-alert and collision avoidance systems, and ground-based radar and aircraft sensors to detect signals from air traffic control transponders — are too large and heavy to be used in small UAS, the NPRM said.

“Until this equipment is miniaturized to the extent necessary to make it viable for use in small UAS operations, existing technology does not appear to provide a way to resolve the ‘see-and-avoid’ problem with small UAS operations without maintaining human visual contact with the small unmanned aircraft during flight,” the document said.

The NPRM singled out as the second major concern the possibility of a loss of positive control — a failure of the control link between the aircraft and the operator’s control station. If the flight of a UAS aircraft could not be directly controlled, this “could pose a significant risk to persons, property or other aircraft,” the NPRM said.

Under the proposed rule, the operator of a UAS would be required to keep the aircraft in sight. The operator would be permitted — but not required — to work with a visual observer who would assist with maintaining “constant visual contact with the aircraft,” the FAA said. “The operator would still need to be able to see the UAS with unaided vision (except for glasses).” 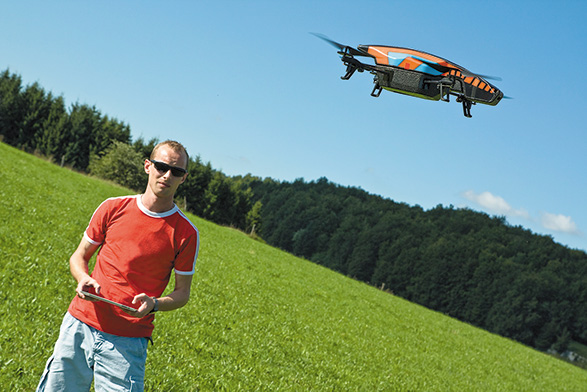 The operator would be responsible for seeing and avoiding manned aircraft, the FAA said, adding, “If there is a risk of collision, the UAS operator must be the first to maneuver away.”

The operator also would be responsible for ending a UAS flight in situations in which continuing “would pose a hazard to other aircraft, people or property,” the FAA said.

The FAA said it had considered — but rejected — a proposal that would have allowed a UAS operator to use onboard cameras or other technology to monitor the UAS aircraft’s position and to detect and avoid other aircraft.

“Technology is developing that could provide an acceptable substitute for direct human vision in UAS operations,” the NPRM said. “FAA does not, however, believe this technology has matured to the extent that would allow it to be used safely in small UAS operations in lieu of visual line of sight.”

The FAA also rules out the use of binoculars and any other vision-enhancing devices, other than eyeglasses or contact lenses, because of the restrictions they would impose on the operator’s (or visual observer’s) peripheral vision. Those devices may be used by others involved in the operation, however.

The agency asked for public comment on whether it should approve operations beyond the visual line-of-sight after technological advances make possible safe operations within that range. “If so,” the FAA asked, “what level of validation should the technology be subject to in order to demonstrate reliability? For example, should the FAA use its existing certification or validation methodologies to evaluate UAS technology?”

Other limitations outlined in the NPRM include a requirement that the small UAS operator “assess weather conditions, airspace restrictions and the location of people, to lessen risks if he or she loses control of the UAS” and a prohibition against flying above people who are not directly involved in the UAS flight. In addition, flights would be conducted no higher than 500 ft and at speeds no faster than 100 mph (87 kt/161 kph).

The person flying a small UAS aircraft would be known as an “operator,” not a “pilot,” the NPRM said, and an operator would be required to be at least 17, to pass an aeronautical knowledge test and to obtain a UAS operator certificate from the FAA. Additional FAA knowledge tests would be required every 24 months in order for the operator to maintain his or her certification. The operator’s credentials also would have to be reviewed by the U.S. Transportation Security Administration.

Pilot certifications, such as a private pilot license or a medical rating, would not be required, the NPRM said.

Nevertheless, the NPRM said, the requirement that all visual observers must be “in a position to maintain or achieve visual line-of-sight with the aircraft at all times” would rule out plans that called for a “daisy-chain formation of multiple observers” — a formation that the FAA said could expand the area of operation and present a greater risk to the public in case of a loss of aircraft control.

Other provisions of the NPRM would require an operator, if asked, to turn over his small UAS aircraft to the FAA for inspection or testing and to report to the FAA within 10 days any accident that results in personal injury or property damage.

All UAS operators would be required to conduct a preflight inspection of both the aircraft and the control station to ensure the entire system is maintained to enable safe operation, the NPRM said.

An aircraft registration would be required but an FAA airworthiness certificate would not, the document added. Nevertheless, the operator would be required to ensure that the UAS is maintained for safe operation.

Aircraft markings also would be required, the NPRM said, adding that, if an aircraft is too small to allow for standard-size markings, then “the aircraft simply needs to display markings in the largest practicable manner.”

Another provision of the NPRM proposed the establishment of a special category of “micro” UAS — those weighing less than 4.4 lb (2 kg) — that would be permitted to be flown only in Class G uncontrolled airspace and at least 5 nm (9 km) from any airport. They could be flown above people who are not involved in the missions, and operators would be permitted to self-certify their familiarity with aeronautical knowledge testing areas.

These micro UAS would be manufactured from frangible materials that break or yield upon impact, including breakable paper and foam, to “present a minimal hazard to any person or object that the unmanned aircraft collides with,” the NPRM said. The micro aircraft would be limited to airspeeds no greater than 30 kt and altitudes no higher than 400 ft above ground level.

The proposed regulations would not affect flights of remotely controlled model aircraft. However, the document restated the legal definition of a model aircraft, including “requirements that they not interfere with manned aircraft, be flown within sight of the operator and be operated only for hobby or recreational purposes.”

The requirement that model aircraft be used only for recreational and hobby purposes has a long history in the United States and an established safety record (ASW, 9/14).

All current FAA rules and enforcement measures regarding unmanned aircraft will remain in place until a new final rule is adopted.