TSB says a baby’s death in the crash of a Metro III in northern Canada illustrates the need for mandatory safety restraints for young children. 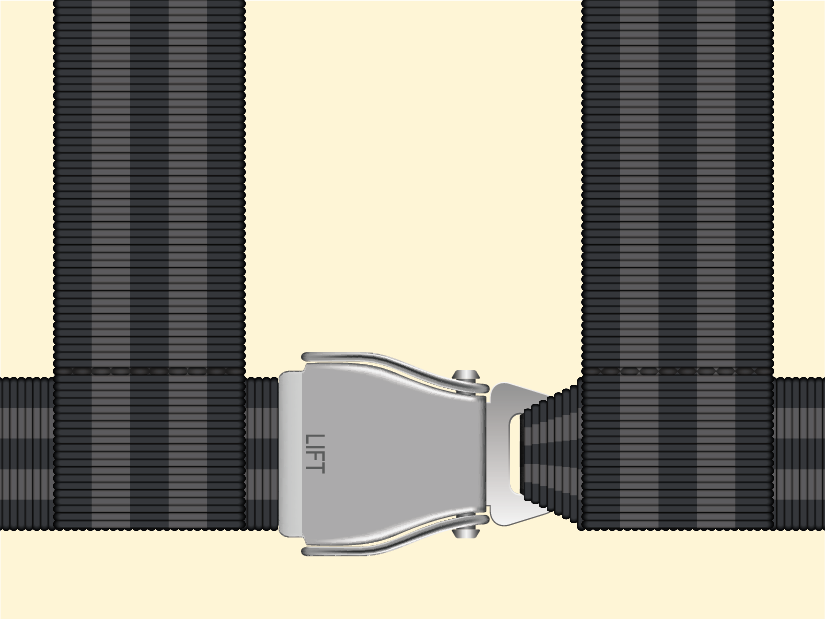 The aviation community must develop and mandate the use of appropriate child restraint systems to ensure that the youngest airline passengers are transported as safely as adults, the Transportation Safety Board of Canada (TSB) says in recommendations accompanying its final report on an accident that killed a lap-held, 6-month-old baby. Eight adults survived.

The Perimeter Aviation Fairchild SA227-AC Metro III crashed as the flight crew attempted unsuccessfully to reject a landing in Sanikiluaq, Nunavut, on Dec. 22, 2012. The TSB said that the airplane “came in too high, too steep and too fast” during its approach and that it struck the ground 525 ft (160 m) beyond the end of the runway (see “Frustration, Fatigue … and Stress”).

All of the adults in the airplane were wearing seatbelts. Both pilots and one passenger were seriously injured, and five other passengers received minor injuries in the crash, which destroyed the airplane.

The unrestrained baby was “ripped from his mother’s arms and killed,” said TSB Chair Kathy Fox.

The final TSB accident report said that the baby’s mother had been seated in the front row of the passenger cabin. The seat was often used for adults holding infants or for passengers with limited mobility because it was near the main exit and there was extra room to move around.

However, instead of an energy-absorbent seatback in front of the mother’s seat, the space held the airplane’s folded main door stairway, the report said.

The absence of the seatback and the presence instead of “hard, sharp metal stairs, ceiling and cockpit partitions likely resulted in the lap-held infant coming into contact with hard, non-deformable interior surfaces during the dynamics of the impact sequence,” the report said.

In addition, the mother was not given the individual preflight briefing prescribed by Canadian Aviation Regulations and the Perimeter Aviation operations manual but not in the Perimeter standard operating procedures that were in effect at the time of the accident, the report said. Nevertheless, during the approach, she held the 23-lb (10-kg) infant correctly, according to the instructions she had received on previous flights — “against her chest, with the infant facing aft,” the report said.

During the crash sequence, the baby was thrown from her arms. He was found afterward next to the captain’s rudder pedals with multiple injuries, the report said.

“Every day, families board commercial aircraft with babies and young children, and the majority trust that, if something goes wrong, a parent’s arms can restrain their child safely,” Fox added. “In the case of severe turbulence, a sudden deceleration or a crash such as this one, research has proven that adults are not strong enough to adequately restrain a lap-held infant just by holding onto them.”

The TSB report cited 1979 research that found that “due to limitations in human clasping strength, it is not always possible for adults to restrain children adequately in their laps by holding onto them, and that children under 2 years old traveling in airplanes were being exposed to undue risks of injury by seating them on an adult’s lap.”1

Other research resulted in similar conclusions, the TSB report said, citing a report on 2004 research by the U.S. National Transportation Safety Board that said that “commercial aircraft are designed to withstand tremendous g forces, but humans are not” and added that those forces mean that a 25-lb (11-kg) baby “could easily weigh three or four times that amount when attempting to hold onto it during an emergency.”2 (See “Senior Flight Attendant’s Survival Motivates Child-Restraint Advocacy.”)

An earlier study by the U.K. Civil Aviation Authority warned that “the carrying of infants and young children on the lap of an adult sitting on a forward-facing seat, without any recognized or approved form of restraint, is likely to promote fatalities and injuries to these children during impact situations.”3

The Australian Civil Aviation Safety Authority (CASA) noted in a 2014 report that, while restraint systems for adult passengers have improved over the years, “the method of carrying infants and small children in aircraft has not really changed since the start of aviation. Consequently, the minimum standards of restraint offered to infants and small children are lower.”4

The TSB report added that infants and young children who are not appropriately restrained are not only at risk of injuring themselves but also present a risk to other passengers.

“Although passengers are required to securely stow all carry-on baggage during takeoff and landing because of the potential risk of injury to other passengers should an unexpected hazardous event occur, passengers continue to be permitted to hold in their lap a child of a size and weight equal to carry-on baggage,” the report said. “If children under 2 years old are not required to be restrained for their own safety, the safety of other passengers also becomes an issue.”

Transport Canada (TC), many other regulatory authorities and many air carriers recommend — but do not mandate — the use of approved child restraint systems for those younger than age 12. As a result, children under 2 often are held on an adult’s lap and many of those under 12 use airplane seatbelts, even though children that age may not be properly restrained by seatbelts alone.

The TSB report noted that TC has indicated that it will not mandate the use of child restraint systems because existing systems were designed primarily for use in automobiles and might not function correctly if used in airplane seats. 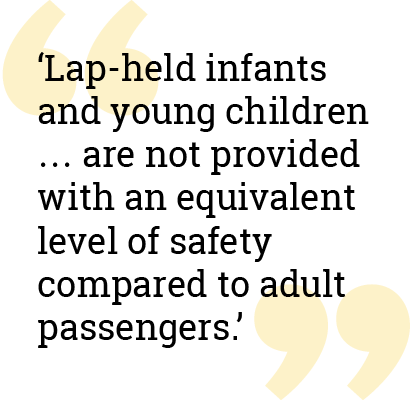 The TSB report said that neither the International Civil Aviation Organization nor TC has data on the number of infants and children traveling on commercial air carriers.

Perimeter Aviation and three other air carriers provided information during the TSB’s investigation that indicated than infants up to age 2 and children from 2 to 12 accounted for 14 percent of their total passenger loads.

Perimeter’s passenger load data for 2012 showed that of 160,000 passengers flown, 11,000 were younger than 2 and 10,300 were between the ages of 2 and 12; together, these two age categories accounted for about 13 percent of Perimeter’s passengers that year, the report said. Data from the other three carriers indicated that infants and children 12 years old and younger accounted for a slightly higher percentage of their passenger loads in 2012.

Nevertheless, because there is no overall reporting requirement, the report said, the exact number of infants and young children traveling by air — and whether they are held on an adult’s lap or seated separately — is not available. This lack of information “makes it difficult to properly assess infant and child passenger exposure to air travel,” the report said.

“Until better data collection is required, the industry will be unable to conduct research, assess risks and outline emerging trends related to the carriage of infants and children. If more complete data on the number of infants and children traveling are not available, there is a risk that their exposure to injury or death in the event of in-flight turbulence or a survivable accident will not be adequately assessed and mitigated.”

The report said that, in addition to the Sanikiluaq crash, a number of other accidents and serious incidents — including incidents involving unexpected in-flight turbulence and other emergencies — have demonstrated the risk to infants and young children traveling without proper restraints.

TC had no plans for new efforts to promote the use of child restraint systems or to educate travelers about the risks of not providing the systems for infants and young children, the report said.

The document added, “Until new regulations on the use of [child restraint systems] are implemented, lap-held infants and young children are exposed to undue risk and are not provided with an equivalent level of safety compared to adult passengers.”

The accident occurred as the flight crew of the Perimeter Aviation Fairchild SA227-AC Metro III rejected an attempted landing at Sanikiluaq, Nunavut, Canada, after a three-hour flight from Winnipeg, Manitoba, and several unsuccessful approaches.

Departure from Winnipeg — originally scheduled for 0930 local time, Dec. 22, 2012, — had been delayed four hours because of required maintenance on a faulty cargo door warning light, the Transportation Safety Board of Canada (TSB) said in its final report on the accident.

Because several flights were planned that day to Nunavut locations, there were “an insufficient number of available instrument approach charts” for Sanikiluaq and airplane survival kits, the report said. Plans were made to obtain both before departure; the survival kit was delivered, but the approach charts were forgotten until after takeoff. The captain decided not to return to the departure airport to pick up the charts but rather to obtain information for the Runway 27 nondirectional beacon (NDB) approach over the radio from another company pilot, the report said.

The information he received “did not include the direction for the procedure turn or the minimum descent altitude (MDA) … for the circling approach to Runway 09,” the report said.

Before departure on the instrument flight rules flight, the first officer briefed passengers on the use of seat belts and the location of emergency exits, but he did not deliver an individual safety briefing — required by regulations — to the mother holding the baby.

The flight crew had obtained weather information before the flight and knew that conditions were marginal but above the minimum visibility and ceiling for landing in Sanikiluaq. Conditions deteriorated en route, and as the airplane approached Sanikiluaq, the pilots learned that conditions at their alternate were below landing minimums; the airplane had insufficient fuel to travel to another nearby airport, leaving the crew without “any favourable diversion options,” the report said. There was no published instrument approach to Runway 09 at Sanikiluaq and conditions did not allow for visual maneuvering, so the flight crew planned for a downwind landing on Runway 27.

The pilots saw the runway at 400 ft above mean sea level, just beyond the missed approach point, and the ground proximity warning system generated a series of warnings as the descent rate reached 1,800 fpm. When the airplane was 2,300 ft beyond the runway threshold, the captain called for a go-around, but the airplane struck the ground beyond the end of the runway. Airport employees, relatives of the passengers and other villagers responded to the scene immediately, and all occupants were transported to the community health center.

The TSB report said that “frustration, fatigue and an increase in workload and stress during the instrument approaches resulted in crew attentional narrowing and a shift away from well-learned, highly practised procedures.”