Boeing’s annual commercial aviation accident data show  a jump in fatalities in 2014, with a total still below the 10-year average.

Western-built commercial jets were involved in 29 accidents in 2014, down from 31 the previous year, but the number of fatalities more than quadrupled to 279, up from 62 in 2013 (Table 1 [opens table in new tab]), according to data from Boeing Commercial Airplanes.1,2

In its annual Statistical Summary of Commercial Jet Airplane Accidents, published in August, Boeing noted three fatal accidents, two of which killed a total of 278 people — everyone in both airplanes. In the third accident, a Boeing 737 landing in Libreville, Gabon, struck and killed a person on a runway; all 137 passengers and crewmembers survived.

Malaysia Airlines Flight 370, a Boeing 777 that disappeared during a March 8 flight from Kuala Lumpur, Malaysia, to Beijing with 239 people aboard, did not meet Boeing’s definition of an accident and was not included on the list.3 Debris from the 777 has washed ashore on Réunion Island, but the main wreckage has not been found.

Of the 29 accidents, Boeing classified three as major — a classification that means “the airplane was destroyed, [or] there were multiple fatalities, [or] there was one fatality and the airplane was substantially damaged.” Ten accidents were considered hull loss accidents — accidents in which an airplane is “totally destroyed or damaged and not repaired” — compared with a 10-year average of 17 per year. 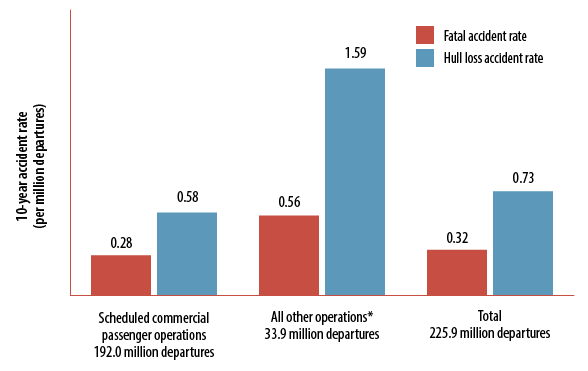 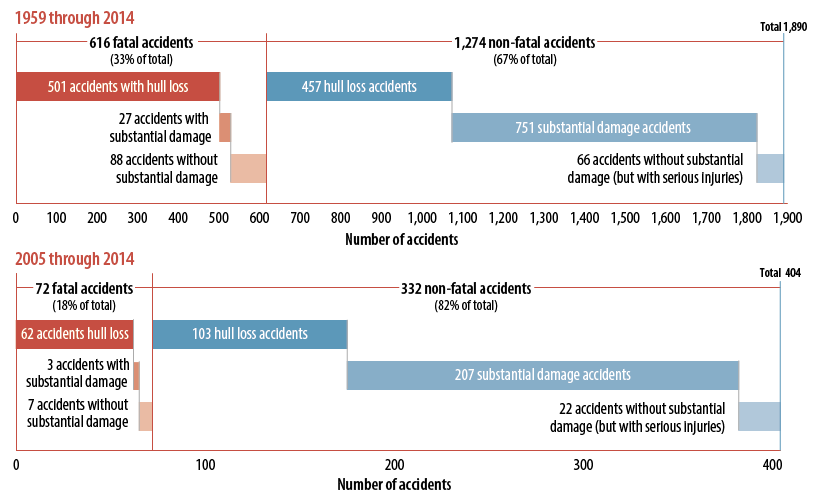 *External fatalities include ground fatalities and fatalities on other aircraft involved, such as helicopters or small general aviation airplanes, that are excluded.

Breaking down accidents according to terminology developed by the U.S. Commercial Aviation Safety Team (CAST) and the International Civil Aviation Organization (ICAO), the data showed that 17 accidents from 2005 through 2014 resulted from loss of control–in flight — a greater number than were attributed to any other cause (Figure 3). Sixteen accidents each were attributed to controlled flight into terrain and to runway excursions on landing — a category that includes the subcategories of abnormal runway contact and ­undershoot/­overshoot. Six additional runway excursion accidents occurred during takeoff, the report said.

Note: Principal categories are as assigned by CAST. Airplanes manufactured in the Commonwealth of Independent States or the Soviet Union are excluded because of lack of operational data. Commercial airplanes used in military service are also excluded.