Lithium batteries being transported in cargo aircraft should be kept separate from other flammable hazardous materials, the U.S. National Transportation Safety Board (NTSB) says. 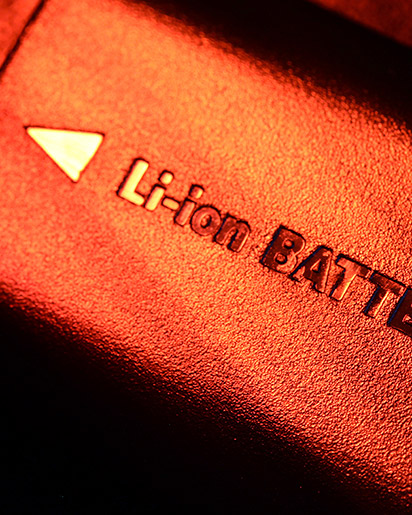 The NTSB issued the recommendation in early February to the U.S. Pipeline and Hazardous Materials Safety Administration (PHMSA), along with a second recommendation calling on the agency to establish maximum loading density requirements to limit amounts of lithium batteries and other flammable hazardous materials aboard the aircraft.

The recommendations resulted from the investigation of the July 28, 2011, crash of Asiana Airlines Flight 991, a Boeing 747-400 freighter, into international waters 130 km (70 nm) west of Jeju Island, South Korea. The NTSB participated in the investigation, which was headed by the Republic of Korea’s Aviation and Railway Accident Investigation Board (ARAIB; ASW, 12/15–1/16).

The investigation concluded that the crash resulted from a fire that erupted “on or near … pallets containing dangerous goods [and] rapidly escalated into a large uncontained fire [that] caused some portions of the fuselage to separate from the aircraft in midair,” the ARAIB said.

The NTSB’s recommendations came several weeks after the International Civil Aviation Organization’s Air Navigation Commission recommended that shipments of lithium ion batteries be banned as cargo on commercial passenger aircraft (ASW, 2/16) and after the U.S. Federal Aviation Administration issued Safety Alert for Operators 16001, warning of the risks of fire or explosion while transporting lithium batteries.

“Before operators engage in the transport of lithium ion batteries as cargo on passenger aircraft, or lithium ion or lithium metal batteries on cargo aircraft, be aware that ICAO and major airframe manufacturers (Boeing and Airbus) have recommended that operators perform safety risk assessments in order to establish whether, or how, they can manage the risk associated with the transport of these batteries,” the SAFO said.

The document advised operators to consider, among other things, the shipper’s past compliance with dangerous goods transport regulations, the specific hazards and safety risks of each type of battery and cell to be carried in their aircraft and the “capability of the crew to fight an in-flight lithium battery fire.” 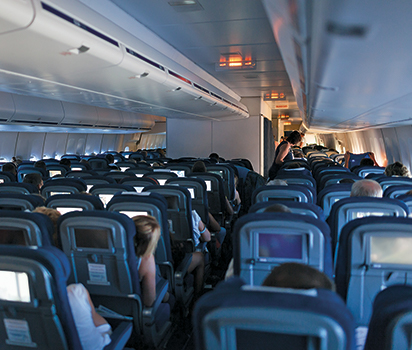 Considerable research is needed to identify potential health risks associated with exposure of aircraft passengers and crewmembers to bleed-air contaminants in cabin air, according to a report by the U.S. Federal Aviation Administration Civil Aerospace Medical Institute (CAMI).

The report noted that the National Academy of Sciences said in 1986 that evidence was not available for a thorough evaluation of the quality of airliner cabin air and that, 26 years later, a 2012 law called for more research in the area.

Studies are in progress to comply with terms of the 2012 law, the report said, citing an ongoing study of cabin air quality through a comprehensive air sampling program and a continuing assessment of health risks to passengers who might be exposed during events in which bleed-air contaminants are released into aircraft cabins.

Nevertheless, the CAMI report, released in November, said, “Quantification of the potential health risks associated with exposure to bleed-air contaminants in cabin air is not possible without broad identification and measurement of the representative hazardous constituents of bleed air during contaminated air events. … Carrying out such a mandate requires adequate funding to support research activities.” 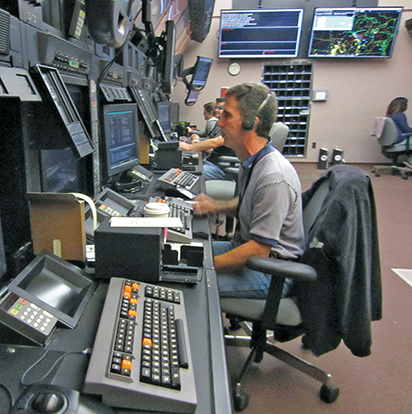 Several “transition issues,” including how to ensure uninterrupted access to the U.S. National Airspace System, would have to be addressed if the federal government’s air traffic control (ATC) system is restructured, a government watchdog agency says.

The Government Accountability Office (GAO) said in a report released in February that separating the ATC entity, now operated by the Federal Aviation Administration (FAA), from the FAA’s safety and regulatory functions “would require determining how to delineate roles and responsibilities between the two entities, ensuring continued coordination of ongoing work and mitigating potential impacts to the remaining safety organization.”

The GAO report was prepared in response to requests by members of the U.S. Congress for an analysis of potential transition issues that might materialize if the government acts on proposals to turn ATC functions over to some other entity.

Such a proposal — which would establish an independent, nonprofit corporation outside the government to provide air traffic services and modernize the ATC system — was approved in February by the House of Representatives Committee on Transportation and Infrastructure. Approval from the full House, the Senate and President Obama would be required for the measure to become law.

The study, published in February, found 113 cases of flight crew incapacitation in all flight operations; of that total, 86 cases involved pilots of high-capacity aircraft — those with a maximum capacity of more than 38 seats or a maximum payload capability of more than 4,200 kg (9,259 lb). Of those 86 cases, 45 were attributed to gastrointestinal illness; in about half of those cases, the problem caused the pilot to be removed from duty for the remainder of the flight.

The report cited calculations that pilot incapacitation of all types affected about one in every 34,000 flights of high-capacity air transport aircraft, or 29 instances of incapacitation per million departures.

After gastrointestinal illnesses, laser strikes were the next most common cause of incapacitation, affecting 11 pilots of high-capacity aircraft during the 2010–2014 study period. The report noted that although laser strikes involving high-capacity aircraft totaled 1,316 during the period, only a relatively small number resulted in incapacitation.

Because of the multi-pilot crews in high-capacity aircraft, instances of pilot incapacitation typically had minimal effect on the flight, the report said.

Low-capacity air transport operations and general aviation reported fewer occurrences of pilot incapacitation and a greater variety of causes, including hypoxia and medical problems such as heart attack.

“Furthermore, 70 percent of pilot incapacitation occurrences in general aviation had an effect on flight operations, namely to return to [the] departure aerodrome or collision with terrain,” the report said.

The report noted that it “highlights that pilot incapacitation can occur in any operation type, albeit rarely.”

To limit the possibility of crew-wide incapacitation for gastrointestinal reasons, many pilots on high-capacity aircraft ensure that they eat different meals from their colleagues, the report said.

“Providing pilots with training in dealing with incapacitation events has been effective for when these events do occur,” the report added. In low-capacity operations, training for non-flight crewmembers — such as aeromedical nurses on emergency medical services flights — also is crucial, and general aviation pilots should “assess their fitness prior to flight [to ensure that they are] aware of any illness or external pressures they may be experiencing.”

The U.S. aviation community should intensify efforts to protect aircraft occupants against injuries; take new steps to avert pilot distraction, fatigue and impairment; and expand the use of flight recorders, the U.S. National Transportation Safety Board (NTSB) says.

In unveiling its 2016 Most Wanted List of transportation safety improvements in January, the NTSB said that several of its recommendations aim to better conditions in all modes of transportation. 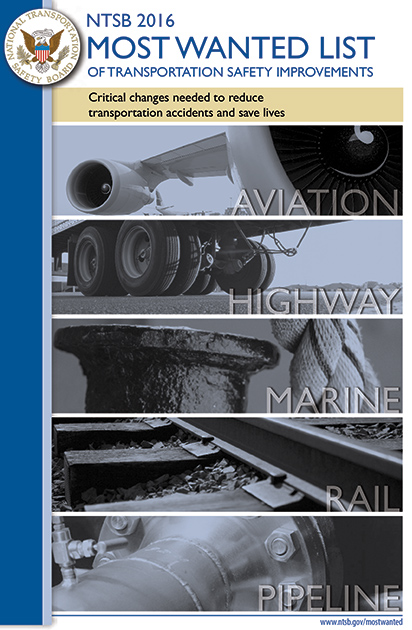 “Distraction (especially from portable electronic devices) and fatigue continue to be serious safety issues in all modes of transportation,” the NTSB said. “The list also notes that undiagnosed and untreated medical conditions have caused or contributed to accidents, and calls for operators and regulators to require medical fitness for duty.”

Another provision calls for use of appropriate restraints in aircraft seating, adding that “we should all be as diligent in securing our small children in an appropriately sized restraint as we are in our passenger cars.”

The Most Wanted List also called for installation of crash-resistant data, audio and image recorders in aircraft where the devices are not currently required. The agency said that it “recommends the use of cockpit image recorders. We also suggest equipping smaller turbine-powered aircraft with image-recording devices and transport-category and helicopter emergency medical service rotorcraft with flight recorders. The NTSB encourages operators across the industry to routinely review recorded information in structured programs.”

The list also included a call for renewed efforts to prevent inadvertent stalls and spins in general aviation — a situation that the NTSB said is the worst safety problem facing general aviation. 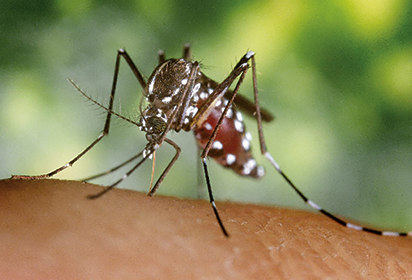 The International Civil Aviation (ICAO) says it is working with other organizations to coordinate actions aimed at controlling the Zika virus, “concentrating on the air transport aspects” of the worldwide effort.

ICAO’s effort — led by the U.N. World Health Organization (WHO) and in cooperation with the International Air Transport Association, the Airports Council International and other organizations — is focused on reducing the number of virus-transmitting Aedes mosquitos at airports.

Standard guidance material includes three WHO publications dealing with aircraft disinsection (the use of insecticides for aircraft) — its Guide to Hygiene and Sanitation in Aviation, the Aircraft Disinsection Insecticides Guide and Guidelines for Testing the Efficacy of Insecticide Products Used in Aircraft.

The U.S. Federal Aviation Administration (FAA) has proposed $455,000 in civil penalties against DHL Express for alleged violations of hazardous materials regulations. DHL has asked to meet with the FAA to discuss the case, which the agency says encompasses seven separate occurrences. … Transport Canada has restored the air operator certificate for Buffalo Airways, which was suspended in November 2015 because of what TC described as “the company’s poor aviation safety record (ASW, 7-8/15).