Air transport leaders must anticipate the industry’s need for modernization of infrastructure and enhancement of regulatory capacity in order to maintain safety and efficiency as the industry grows, Olumuyiwa Benard Aliu, president of the Council of the International Civil Aviation Organization (ICAO), says.

In a series of meetings with European air transport leaders in early May in Brussels; Cologne, Germany; and Athens, Greece, Aliu said that, in encouraging innovation, “it behooves ICAO to anticipate, enable and guide the evolution these developments are now driving.

“We must help to foster innovation in all its forms but, at the same time, safeguard the basic interoperability that has made air transport such an incredible force for peace, prosperity and economic growth in the world,” Aliu said.

The topic will be among many others to be addressed during ICAO’s 40th Assembly in September, he said.

Aliu said that the current rate of growth in air traffic presents special challenges for the next generation of pilots, technical specialists, managers and leaders.

“Increasing flight and passenger volumes need to be properly assessed and managed to maintain the historically remarkable safety and efficiency of our network,” he said. “This is why the enhancement of regulatory capacity and the modernization of aviation infrastructure and human resources development approaches [have] become critical and why we needed to prioritize the effective alignment of national and regional aviation development plans with ICAO’s global plans.”

U.S. Transportation Secretary Elaine Chao announced the FAA’s action in late April, paving the way for Wing Aviation to begin the commercial delivery of food in Blacksburg, Virginia. Wing — a unit of Alphabet Inc., which is the parent company of Google — has been a partner in the Transportation Department’s Unmanned Aircraft Systems Integration Pilot Program, along with Virginia Tech and the Mid-Atlantic Aviation Partnership. Virginia Tech is located in Blacksburg.

Chao said the approval constitutes a “step forward for the safe testing and integration of drones into our economy.”

The European Commission says it has added airlines from Moldova to its Air Safety List of carriers banned from operating in the European Union (EU) and ended the ban on two Angolan carriers.

In a list revision announced in mid-April, the commission said the changes mean that 120 airlines are now prohibited from operating within the EU.

Moldovan carriers, with three exceptions — Air Moldova, Fly One and Aerotranscargo — are now banned “due to a lack of safety oversight by the civil aviation authority of Moldova,” the commission said.

The commission also said that civil aviation authorities of the Dominican Republic and Belarus have been placed under heightened scrutiny “because of signs of a decrease in safety oversight.” 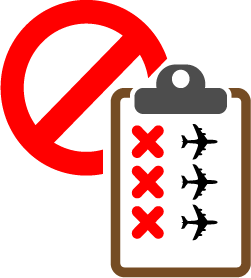 Two airlines from Angola — TAAG Angola Airlines and Heli Malongo — which had operated in the EU under restrictions since 2008, were removed from the list.

The commission said the list is intended to help ensure “the highest level of air safety for European citizens.” The list also is “a major preventive tool,” the commission said, because it “motivates countries with safety problems to act upon them before a ban under the EU Air Safety List would become necessary.”

The 120 banned airlines include 114 airlines certified in 16 countries — Afghanistan, Angola (except for the two airlines released from the ban), Republic of the Congo, Democratic Republic of the Congo, Djibouti, Equatorial Guinea, Eritrea, Gabon (except for one airline operating under restrictions), the Kyrgyz Republic, Liberia, Libya, Republic of Moldova (with three exceptions), Nepal, São Tomé and Príncipe, Sierra Leone and Sudan. The bans stem from a lack of safety oversight by the aviation authorities of these countries, the commission said.

Four other airlines may operate in the EU only with specific aircraft types — Afrijet of Gabon, Air Koryo of North Korea, Air Service Comores of the Comoros and Iran Air.

Although non-mandatory service bulletins are not considered safety-critical, they can affect aircraft reliability, the Australian Transport Safety Bureau (ATSB) said in a report on the Feb. 5, 2018, hydraulic system failure on a Boeing 757.

The 757 had just departed from Auckland (New Zealand) International Airport and was climbing through 6,000 ft when the flight crew observed a left hydraulic system quantity warning message. They conducted the quick reference handbook checklist and received clearance to hold northwest of the airport while they investigated the problem.

After receiving additional warning messages about both left and right hydraulic systems, they shut down the systems, declared an urgency and requested clearance for an immediate return to Auckland. The 757 landed without incident.

The ATSB investigation identified “sequential failures in the hydraulic system.” One of those failures involved the power transfer unit pressure switch, which had been the subject of a non-mandatory service bulletin issued in 2010. If the corrective action recommended in the service bulletin had been implemented, the right system likely would not have failed, the report said.

“The safety message from this investigation is that, although some service bulletins are not deemed to be safety critical, they can still have an impact on aircraft reliability,” the ATSB said. “While operators are required to implement all airworthiness directives, the ATSB recommends that operators familiarise themselves with non-mandatory service bulletins and consider the potential impacts of implementation.”

After the occurrence, the ATSB said, the operator performed preventive maintenance on the 757 to replace all main landing gear flex hoses and update the power transfer unit pressure switch, as recommended in the service bulletin. The operator also modified its aircraft maintenance plan to call for improved inspections and time-limited life for flex hoses, the report said.

The U.S. Pipeline and Hazardous Materials Safety Administration (PHMSA) is planning to establish a new Lithium Battery Safety Advisory Committee to provide advice on safety improvements in the transportation of lithium batteries.

“The committee will advise the department on developing policy positions for international forums and on how to increase awareness of the importance of lithium battery safety requirements,” the department said, adding that the committee’s findings ultimately will be submitted to both the transportation secretary and Congress.

In recent years, DOT and its counterparts worldwide have restricted the transportation of lithium ion cells and batteries in order to prevent an in-flight fire caused by thermal runaway — a chain reaction in which lithium battery cells overheat and burn; flames then spread to adjacent battery cells and flammable materials.

DOT already has moved to prohibit the transportation of lithium ion cells and batteries as cargo on passenger aircraft and to impose new requirements for those carried in cargo airplanes.

Flight Safety Foundation’s website includes the Foundation’s guidance for flight crews on dealing with overheating lithium batteries in a personal electronic device (PED), including extinguishing the flames with the nearest fire extinguisher and then pouring water or another nonflammable liquid over the PED. The PED should be moved only if there are adequate protections for the firefighting crewmember in terms of heat-resistant gloves, eye protection and a way to be shielded from the device.

The U.S. Federal Aviation Administration (FAA) is forecasting that U.S. aircraft operations will  increase more than 25 percent over the next 20 years. In an industry forecast released in late April, the FAA said growth for domestic passenger carriers, measured in revenue passenger miles (RPMs), will average 1.8 percent per fiscal year from now through Sept. 30, 2039, and international RPMs will increase 3 percent per fiscal year. … The Australian Civil Aviation Safety Authority (CASA) says it is developing plans that will “give the drone industry more certainty about the safety regulation of the sector into the future.” CASA says its regulatory roadmap will address topics including airspace integration, management of unmanned traffic and the availability of low-cost automatic dependent surveillance–broadcast (ADS-B) technology.

The U.S. Department of Transportation says it plans to award $771 million in airport infrastructure grants to 522 airports in all 50 states and five U.S. territories. Last week’s announcement…

Some 390 airports in the United States are scheduled to receive $660 million in infrastructure grants for improvements to runways, taxiways, terminals, aircraft rescue and fire fighting vehicles, and other…