Side effects of planned security measures, such as remote identification and tracking, complicate safety management of U.S. drones. 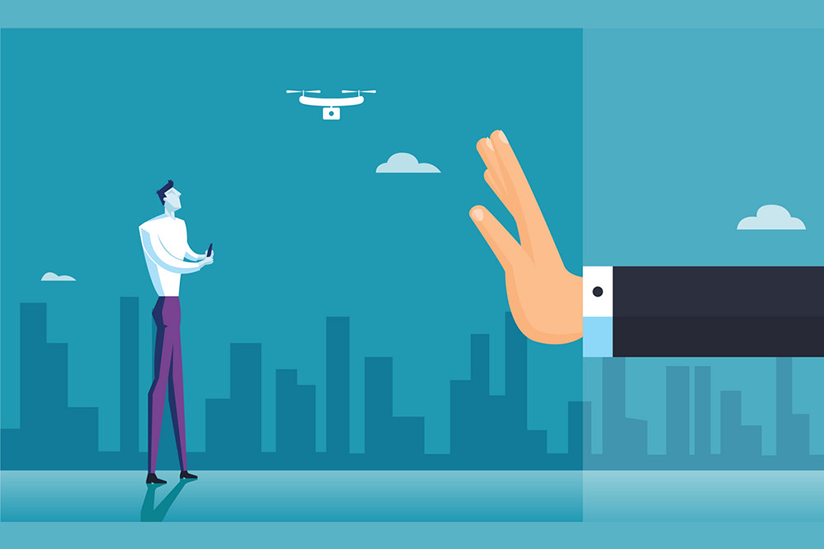 The U.S. government’s coming wave of security measures for small unmanned aircraft systems (UAS) has the potential to disrupt or delay regulatory changes that would expand UAS operators’ basic capabilities, several experts told the FAA UAS Symposium in March. Some called security vital to the integration of UAS aircraft in the National Airspace System (NAS). The symposium was cosponsored by the Federal Aviation Administration (FAA) and the Association for Unmanned Vehicle Systems International (AUVSI).

FAA Acting Administrator Dan Elwell described safety and security as inseparable. “The next 12 to 18 months are critically important to UAS integration. We’re working to expand small-UAS operating parameters while making sure we appropriately consider security and privacy issues,” he said. “We need to mitigate risks to national security and public safety posed by people who aren’t playing by the rules, whether by intent or ignorance. One malicious act could put a hard stop to all the good work we’ve done on drone integration.”

National aviation policy requires emphasis on remote identification (ID) and tracking for UAS, Elwell said. “We’re committed to moving very quickly to establish remote ID requirements. If you want to fly in the system, you have to be identifiable — and you have to follow the rules,” he said.

Operators of small UAS aircraft who have come to FAA’s attention for jeopardizing NAS operations often have been called “the clueless, the careless and the criminals,” another FAA official said. Angela Stubbleﬁeld, deputy associate administrator, FAA Security and Hazardous Materials Safety Organization, said, “We need to move forward with a robust security framework. Anonymous operations in the NAS are antithetical to safety and security.”

The Path to Full Integration 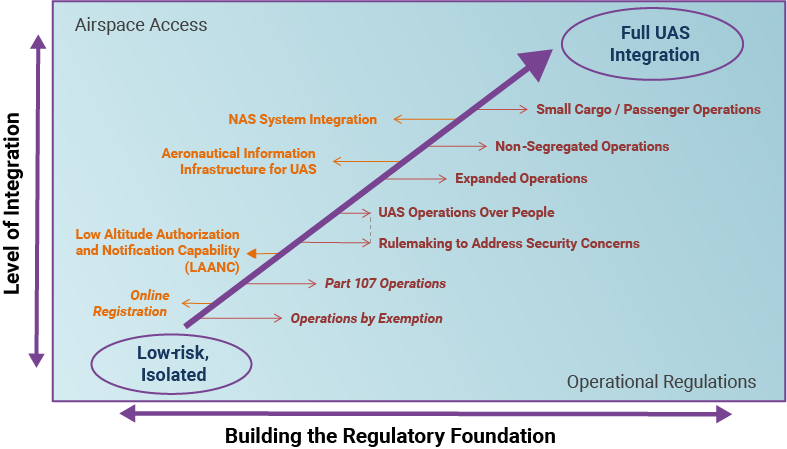 “We need to figure out a way to safely enable beyond visual line of sight operations, nighttime operations and flight over people operations,” Kratsios said. “But the potential misuse or errant use of this technology poses unique safety and security challenges. The federal government today has limited authority to deploy technology to detect and defeat UAS-based threats. The administration [of President Donald Trump also] is working on a legislative proposal to enable certain agencies to use technology capable of detecting and, if necessary, mitigating UAS-based threats to certain sensitive facilities and assets.”

This security-infused view of safety has influenced AUVSI to collaborate closely with FAA on finding balanced solutions, said Brian Wynne, president and CEO of the association.

The next regulatory step to enable routine UAS flight over people, for example, has been delayed for more than a year, Wynne said. Companies, therefore, stepped up with proposals. “AUVSI has long supported a registration system for commercial and recreational UAS operators, which is a prerequisite for remote-identification solutions,” he said.

“Maintaining federal sovereignty of the airspace keeps our skies safe and helps foster innovation. We believe that a UAS registration system promotes responsibility by all users of the NAS and helps create a culture of safety that deters careless and reckless behavior. We need broader engagement from our government partners — notably those responsible for national security — to understand their specific current concerns and to work collaboratively to address them.”

The federal government’s last two years of work on defenses against security threats from small UAS aircraft focused on changing laws and on technical research. Brendan Groves, counsel to the deputy attorney general, Department of Justice, said, “We have watched with growing alarm as ISIS [the militant group also known as the Islamic State] perfects the art of transforming commercially available drones … into weapons of war.”

Over the past 12 months, FAA has focused on educating staff and non-staff stakeholders about the safety roles of the UAS pilot, airworthiness standards, operating limitations and segregated airspace. Training covers safety analysis of drones and UAS operations, safety-assurance processes for aircraft certiﬁcation and operations, and safety expectations from risk-based decision making.

FAA’s performance-based approach — the preferred alternative to past prescriptive requirements and mostly quantitative targets — applies proactive and predictive approaches, Ryan said. “We’re trying to remove ourselves from some of the detail work for low-risk types of UAS operations. So you’ll see FAA moving toward industry-based compliance processes,” he said.

FAA’s Elwell noted that one crucial step toward UAS traffic management — low-altitude authorization and notification capability (LAANC) — is poised to offer immediate safety benefits and compatibility with the security initiatives. LAANC automates how UAS operators get permission from ATC to fly in predetermined areas of controlled airspace, enabling “controllers to mitigate risk by ensuring that no other aircraft are operating near the drone,” he said. FAA began nationwide beta testing April 30. “Nearly 300 ATC facilities and 500 airports will be covered by September,” Elwell said.

LAANC services will help to segregate most drones from manned aircraft with minimal ATC involvement. Tim Arel, deputy chief operating oﬃcer, FAA Air Traﬃc Organization, said, “Relinquishing lower altitudes — [to keep drones] away from the flows of normal aircraft operations — is something new, but something certainly achievable. ATC now can share safety information in real time” with the manned-aircraft pilots operating at those altitudes.

Resilience engineering plays a significant role. He said, “It makes sure that you’ve thought through whether or not the human and the system interact to respond to failures in a safe manner.”

Murzilli told the symposium that subjectivity and variation in UAS risk assessments among nations can be overcome by standardization. In Europe, a working group of the Joint Authorities for Rulemaking of Unmanned Systems (JARUS) expects to issue recommendations for public comment in mid-2018 that will follow up its first report from July 2017.

FAA’s Stubbleﬁeld briefed the symposium on drone-detection and tracking research. In 2016, FAA and the Department of Homeland Security began a pilot project studying the use of detection technologies in the airport environment, she said, focusing on how small UAS interact with ATC.

In 2017, some federal departments received their first legal authority to detect drones and to counteract defined types of drone flights, Stubblefield said. The Department of Justice and members of Congress also began to propose related laws to protect and to defend facilities and personnel designated as critical infrastructure, she said.

Groves, from the Department of Justice, explained the legacy legal impediments. “If you try to use technologies that are capable of detecting and, if necessary, disrupting unmanned aircraft, you immediately confront a thicket of federal laws that simply haven’t kept pace with the times. The level of uncertainty we face now — even in the federal government — is untenable,” he said.1,2

Anh Duong, FAA’s deputy associate administrator for security and hazardous materials safety, emphasized that “detecting, tracking, mitigating or countering a nefarious UAS” requires safety and security stakeholders to understand the legal issues and limitations placed on technological solutions. Unlike military countermeasures, “A lot of them have not been evaluated in homeland-security settings,” she said.

FAA plans to use the ARC’s December 2017 report in developing a proposed rule. He said a new FAA ARC in mid-2018 will define in detail the need for remote ID and tracking standards for small UAS and recommend a framework for this rule.

Earl Lawrence, executive director, FAA UAS Integration Office, said, “The most contentious thing we talked about during the 2017 ARC was ‘So who has to ID their drones?’” The ARC essentially proposed, “If you’re operating in a location in which operation under Part 107 can be authorized, then that’s the concept of ID systems [applicability],” he said.

Another proposal would require remote ID and tracking for small UAS operators that will be flying from Part 107-limited airspace to airspace higher than those altitude limits or to other controlled airspace. “You would transition to normal ATC systems, such as the automatic dependent surveillance–broadcast [ADS-B Out] transponders that would apply to that group,” he said.

FAA also is considering a “networked and identified” system in which the location of each small UAS aircraft flying at Part 107-defined altitudes and data such as the location of the operator’s control station would be transmitted to FAA’s network for operations.

Implementing any of these approaches would have a ripple effect on many ATC services. Jay Merkle, deputy vice president of the program management office of FAA’s Air Traffic Organization, said, “When we issue an airspace authorization [in the future], we think it’s very feasible and viable — and probably necessary — that we associate the drone ID with that authorization so that everyone in the community can contact the pilot.” The key is having the ability to manage small drones by exception, meaning that controllers normally will not have to talk to drone operators during flight — “distracting controllers from their primary duties,” he said.

Preventing RF interference and related problems is a major priority for drone ID. “We cannot afford to have any small drones operating in areas where we are not providing them services on [cooperative-surveillance frequencies]. We cannot afford to have UAS aircraft transmitting, for example, on a frequency that causes track jumps [from multipath effects] on ATC displays of a final approach to Los Angeles International Airport,” Merkle said.

Another concept for drone ID is the UAS traffic management (UTM) architecture of software applications and databases on a secure network that — like LAANC — interfaces with the UAS industry, said Steve Bradford, FAA’s chief scientist for NextGen. Yet another concept would have ATC obtain UAS operator IDs and aircraft IDs from track-data companies serving designated airspace and airports, he said.

“It’s a delicate balance,” he said. “The security partners let us know what they intend to do. We let them know what the potential impacts are for traffic in the area. Then we work to actively deconflict traffic and ensure a measured response appropriate to the potential threat.”

The vendors reported 100 percent interception accuracy under conditions in which they knew in advance when researchers would launch “attack drones” during live simulations and the type and characteristics of each drone. Even so, the participants found the tests “arduous,” Soltys said. The tests were not specifically funded, so researchers did not have their preferred analytical metrics, such as independent telemetry data, she said.

Arel also stressed that unsafe responses or overreactions to drone activity by security officials must be kept in check. “Sometimes, the level of risk that the intruder causes is not worth the amount of kinetic energy — or whatever may be deployed — to deal with the issue,” he said. “If someone is operating a drone just 100 ft higher than they should, to the east of an airport in the north-south runway configuration, do we shut down a major international hub for a prolonged period of time to deal with that?”