Simulation Can Be Habit Forming 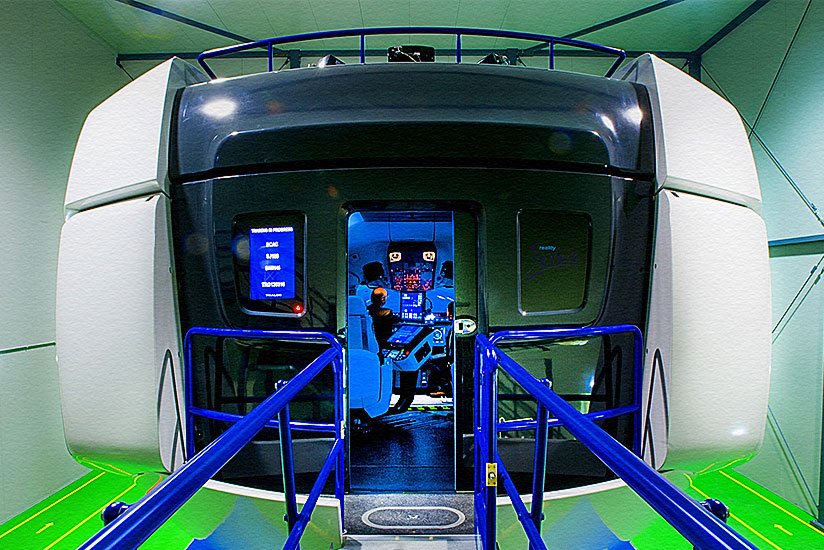 For example, the first airplane the U.S. National Aeronautics and Space Administration (NASA) had me check out in was a support aircraft, a Douglas C-47 “Gooney Bird.” The differences between it and the high performance Northrop T-38, in which I had over 1,200 hours as an instructor pilot, are evident with just a glance at the sleek supersonic jet trainer and the bulky tail-dragger.

Unlike the T-38, the “Goon” was slow to respond, and, for ground handling, required a unique coordination of brakes and power, and a lot of leg muscle. My first takeoff attempt in the C-47 was a spectacular demonstration of negative habit transfer. I careened back and forth across the runway. The oscillations increased, forcing my instructor to take control. It was grossly apparent that the habits I established in extensive jet experience did not transfer.

Had applicable simulator training existed back then, the transition could have gone more smoothly.

Advances in simulator technology mean that today’s pilots can earn a type rating in a flight simulation training device (FSTD), formerly known as a full flight simulator (FFS) — without ever having flown the actual airplane.2 The six-degree-of-freedom3 motion base and high resolution visual displays provide a realistic training environment that transfers well to a real airplane.

An FSTD used in flight training must have sufficient fidelity in all aspects of its form, function and operation, including a realistic emulation of motion cues to affect good habit transfer. However, because of the physical limits of an FSTD’s motion base, the ratio of inertial cues (cues from sensory organs in the inner ear that sense acceleration) to visual cues is not the same as in flight. When motion and visual cues are not congruent, pilots can become disoriented — this can even cause motion sickness in simulator training.4

Loss of control–in flight (LOC-I) accidents represent the largest category of commercial aviation fatal accidents, and a review of worldwide transport airplane accidents from 2001 through 2010 indicated that loss of airplane state awareness has been responsible for most fatal LOC-I accidents.5

Two examples, which ultimately led to changes in pilot training and an increased reliance on flight simulators, were the 1994 crash of American Eagle Flight 4184 in Roselawn, Indiana, U.S.,6 and the 2009 crash of Colgan Air Flight 3407 in Clarence Center, New York, U.S.7 Both crashes were precipitated by a stall/upset. Although icing conditions were a factor in both cases, it was apparent that the flight crews were not prepared to recognize, prevent and recover from upsets that likely caught them by surprise. In the American Eagle crash, the surprise came from the sudden uncommanded roll from an aileron hinge moment reversal due to wing ice, and in the Colgan Air accident, from the full stall caused by disregarding the “stall pusher.”

Historically, pilot type certification in flight simulators has been limited to training within the normal flight envelope. However, a law enacted in the United States in the aftermath of the Colgan crash directed the FAA to require Federal Aviation Regulations (FARs) 999Part 121 air carriers to provide stall and upset recovery training in FSTDs8 by March 12, 2019. To satisfy this new training requirement, FSTDs must meet certain high angle-of-attack modeling criteria and qualifications. Qualification of these simulators requires quantitative and subjective evaluation. Test pilots who have performed full stalls in the aircraft being simulated, or stalls in a similar aircraft, will evaluate the simulator models. FSTDs that manufacturers do not modify according to FAA requirements will be limited to use in “approach to stall” training.

Regulations9 call for simulator manufacturers to develop practical and cost-effective stall recognition and recovery training that will transfer positively to real airplanes. One problem, however, is the lack of aircraft manufacturers’ data needed to modify simulator aerodynamic models. Developing and validating these models for all simulator types is impractical. Therefore, flight simulator manufacturers must revert to innovative stall modeling methods that provide a viable solution to the problem — without requiring the use of actual aircraft stall flight data. One such method allows for the use of existing engineering data to create a stall model for the type of aircraft being simulated, providing representative stall and post-stall flight characteristics.10 The models can be implemented in an existing training device and after successful evaluation by test pilots.

An example is a “black box” approach called StallBox, which was developed and tested by Bihrle Applied Research.11 As shown in the diagram, StallBox connects to the original equipment manufacturer simulator model and blends type-representative stall characteristics as an extension to that model.

After StallBox was developed, testing and evaluation were performed by test pilots and airline pilots to compare the stall recognition and recovery characteristics of the type-representative stall model, a stall model using type experimental data, and the unmodified baseline simulator model.12 The pilots had wide-ranging opinions on some stall characteristics such as buffet, roll off and high-altitude stall recovery technique, but after testing was completed, they said in a presentation to an American Institute of Aeronautics and Astronautics conference that they agreed that “in situations when developing a stall model based on flight data is not practical, the alternative approach of developing a model based on computational aerodynamics, wind tunnel data and subject expert opinion appears feasible.”

An upset is defined by the International Civil Aviation Organization (ICAO) “as an airplane in flight unintentionally exceeding the parameters normally experienced in line operations or training, normally defined by the existence of at least one of the following parameters:13

For all normal flight conditions, FSTDs provide an adequate platform for effecting positive habit transfer to the airplane. However, that is not entirely the case for upset conditions, which are characterized by large amplitude pitching, rolling and yawing motions. Additionally, FSTD limitations in presenting realistic inertial and motion cues can affect the pilot’s perception of control response and the result of control inputs. To minimize the risk of negative habit transfer, the FAA emphasizes the importance of not using an FSTD in upset prevention and recovery training (UPRT) if the simulator responds differently than the airplane.14 Therefore, effective UPRT performed in an FSTD must consider its limitations and the effects of those limitations on human perception and performance.

In-flight simulation (IFS) aircraft such as the highly modified Calspan Aerospace Learjet have been extensively employed for UPRT.15 The aircraft has dual control systems — a baseline Learjet flight control system and a computer-driven system that can host a variety of aircraft models, just as with an FSTD. When the simulation system is engaged, the aircraft is “flown” by an evaluation pilot, who experiences the handling characteristics of the airplane being simulated. A safety pilot monitors the flight and can disengage the system if there is a safety of flight issue or malfunction. Advantages of using an IFS aircraft for conducting UPRT include the absence of scaling of motion cues and the ability to readily simulate upset-causing control malfunctions. Disadvantages include cost and limited aircraft availability.

An evaluation of stall and upset recovery training was sponsored by the U.S. Naval Air Systems Command in Patuxent River, Maryland, and performed by Calspan Aerospace using its IFS Learjet, and NASA using its cockpit motion simulator fitted with an integrated flight deck (IFD). The purpose was to evaluate an integrated training program including the IFS and ground based simulators for UPRT training.16 The same upset maneuvers were performed by a group of test pilots and line pilots in the IFS Learjet and in NASA’s IFD. The IFD motion algorithm was modified for the evaluation with enhanced stall buffet cueing.

In all, 13 UPRT tasks were performed by the pilot participants, beginning with some basic IFS and IFD familiarization. The tasks involved upsets in all three axes, including nose-high and nose-low recoveries, upsets due to trim and control system malfunctions, and control problems. Half the pilots began their evaluations in the IFD, and the other half, in the IFS. Pilots who began in the IFD felt it prepared them better for the flight in the IFS, while pilots who trained first in the IFS were ambivalent but nevertheless felt that the realism of training in the aircraft first established appropriate expectations for training in the ground-based IFD. Assessing these results, it is important to remember that both the IFD and the IFS used essentially the same simulation model. The only differences were the motion and visual cues. Of note, most pilots felt that training in the IFS for UPRT was the most valuable.

The new pilot training requirements to mitigate LOC-I using FSTDs alone will not provide the necessary motion and gravitational acceleration (g) cues that a pilot must correctly perceive to diagnose and recover from real-world upsets. If the training is not representative of real-world conditions, it can result in negative habit transfer.

However, the Calspan-NASA research on the use of ground-based simulators for UPRT17 found that initial training in an FSTD helped pilots perform better when first exposed to real flight upset conditions in the IFS. In fact, pilots receiving this training did consistently better on their final evaluation flights in the IFS.

Effective training can be accomplished in a ground-based simulator. But as explained in the  research, “while FFS (FSTD) training did result in a significant improvement in pilot skill, knowledge and confidence, pilots were not able to reach the satisfactory level of proficiency from FFS (FSTD) training alone. The IFS-trained group, on the other hand, was able to fully assimilate the maneuver cues and use that information to develop and implement a successful recovery strategy.”

Until simulator technology finds a way of representing perceptual cues that are critical to a pilot’s state awareness and control performance, their use to satisfy the new training rules will likely be limited.

Richard J. Ranaudo was a NASA research pilot for 25 years and the lead project test pilot in the icing research program for 16 years. After retiring from NASA, he spent five years as manager of Canadair flight test programs and conducted icing development and certification testing on prototype business and regional aircraft.

On a dark, overcast December morning in 1983, the U.S. National Aeronautics and Space Administration (NASA) dispatched a Grumman G-159 turboprop with 17 passengers on board from the Lewis Research Center in Cleveland, Ohio, U.S., to a contractor facility. I was pilot in command, my first officer was another staff pilot, and a flight engineer rounded out our crew.

Everything was normal during ground operations and throughout the takeoff roll, but the moment we took off and entered the overcast, the right engine began to surge wildly. With little time to diagnose the problem, I decided to shut down the engine immediately to avoid the risk of catastrophic engine failure. We were only a few hundred feet over the ground and in the clouds — any mistakes, such as shutting down the wrong engine or failing to maintain the correct single-engine safety speed, could result in disaster, not only for the crew and passengers but also for the small city of Olmstead Falls that we were about to fly over.

Many years of training in the flight simulator for this same emergency kicked in. I reacted automatically — I identified the failing engine, executed the engine failure/shutdown procedure and declared an emergency. I directed the first officer to complete the engine failure checklist and continued to climb slowly to 1,500 ft. The flight engineer prepared the cabin for landing, and I flew an uneventful single-engine precision approach and landing at weather minimums — just like in the simulator.

This event drove home the value of recurrent simulator training, and how well the habits learned and reinforced in a simulator can transfer to real-world conditions.

Air Mail | Letters From Our Readers