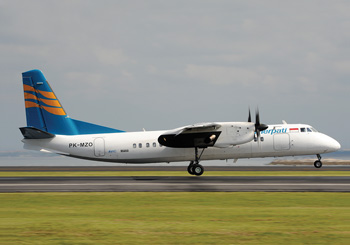 The drag created by the nil or negative thrust produced by propellers set in the beta/ground idle range is very useful in controlling taxi speed on the ground without wearing out the wheel brakes, but it can transform an aircraft’s aerodynamic efficiency to that of a grand piano when selected in flight.

Thus, a variety of mechanical latches, locks, levers and detents have been devised to prevent the power levers, which contribute to propeller control, from being moved into beta/ground idle mode at the wrong time, such as on short final approach.

Like other aircraft manufacturers, Xian went one step further in its MA60 twin-turboprop transport by incorporating an electromechanical lock as a backup to the mechanical stops that help prevent the power levers from being moved aft of flight idle in the air.

The electromechanical lock is designed to release automatically when the weight-on-wheels system is triggered on touchdown, allowing the pilot flying to subsequently release the mechanical stops and move the power levers from flight idle into ground idle and then into reverse (Figure 1).

However, when Indonesia’s Merpati Nusantara Airlines added MA60s to its fleet, it found that some pilots were having difficulty moving the power levers from flight idle to ground idle — delaying the selection of reverse thrust — on landing because the electromechanical lock tended to balk in release.

Believing that the problem would persist as more of the aircraft were acquired, the airline solved the problem expediently by revising the “Approach” checklist to require pilots to disable the electromechanical lock before landing. (The lock can be disengaged manually by pulling up a knob located at the top of the central quadrant and between the power levers. The mechanical stops then can be disengaged by pulling up tabs located in slots just below the power lever handles.)

The checklist revision requiring the electromechanical locks to be disengaged manually on approach was effected without the approval of civil aviation authorities and set the stage for a costly mistake, according to Indonesia’s National Transportation Safety Committee (NTSC).

The mistake occurred the morning of June 10, 2013, when a first officer-in-training disabled the electromechanical lock per the checklist but then inadvertently released the mechanical stops and moved the power levers into ground idle while the aircraft was still hundreds of feet above the ground on approach to El Tari Airport in Kupang, Indonesia.

The MA60 entered a rapid descent and struck the runway with a vertical velocity of 5.99 g (i.e., 5.99 times standard gravitational acceleration). The force of the impact was enough to crush the landing gear and cause the aft wing attachments to fail. Five people aboard the aircraft were seriously injured; the other 45 occupants sustained minor or no injuries, said the NTSC’s final report on the accident.

The MA60 was inbound to Kupang, in the Timor area of Indonesia, on a scheduled flight with 46 passengers and four crewmembers from Bajawa, on Flores Island. The aircraft, PK-MZO, was manufactured in 2007 and had accumulated 4,486 flight hours and 4,133 cycles.

The pilot-in-command (PIC), 42, had 12,530 flight hours, including 2,050 hours in type. He was employed by Merpati Nusantara Airlines in 1994 and earned an airline transport pilot certificate and a type rating in the MA60 in 2004. He later qualified as a route instructor for the airline and had logged 218 flight hours in that capacity.

The second-in-command (SIC), 25, joined the airline in 2012. He had 311 flight hours, including 117 hours in type. He held a commercial pilot certificate with an instrument rating and an MA60 type rating. The SIC had accumulated 142 flight hours, including 24 hours as an observer, in a line training program leading to qualification as a first officer.

The MA60 is a 60-seat twin-turboprop transport introduced by Xian Aircraft Industry Co. of China in 2000. It is a stretched version of the Y7-200, a short-takeoff-and-landing aircraft manufactured by Xian primarily for the Chinese air force. The design of the Y7, and consequently the MA60, was based on the Antonov 24, which Xian began to build under license to Antonov in 1977.

As of April 2014, 53 MA60s were in service in 23 countries. In 2011, Xian introduced the MA600, which has upgraded avionics equipment, cabin improvements and more powerful engines. A 70-seat version, the MA700, was in development.

The airline had planned to have the PIC conduct the SIC’s first officer check ride during the flight from Bajawa to Kupang, but the SIC had requested a delay “to be more confident prior to the flight check,” the report said.

Of special note is that the SIC had displayed a tendency to delay moving the power levers to ground idle and reverse after touchdown, even after the electromechanical lock had been disengaged on approach. The report said that this deficiency likely played an influential role in the accident.

The aircraft departed from Bajawa at 0902 local time with the SIC as the pilot flying. Twenty minutes into the flight, the PIC told the El Tari Airport traffic controller that the aircraft was at 11,500 ft and 110 nm (204 km) northwest of the Kupang VOR (VHF omnidirectional radio).

The controller advised the pilots that Runway 07 was in use and that the weather conditions at the airport included surface winds from 110 degrees at 11 kt, 10 km (6 mi) visibility and a few clouds at 2,000 ft. Surface temperature was 30 degrees C (86 degrees F).

Flight data recorded on final approach showed that the left power lever was moved into ground idle when the aircraft was about 112 ft above the ground, followed by the right power lever at 90 ft.

“The vertical deceleration recorded on the flight data recorder (FDR) was 5.99 g and followed by –2.78 g,” the report said. “The longitudinal deceleration after impact was calculated as approximately 0.7 g.”

The report classified the damage to the aircraft as “substantial.” Photographs of the wreckage show that the main landing gear and the nose landing gear had collapsed on impact, the fuselage had buckled and torn near the forward section of the cabin, and the entire wing had tilted leading-edge-down, causing both propellers to separate when the forward sections of the power plants struck the runway.

Examination of the accident aircraft revealed that the electromechanical lock was in the open position, indicating that the crew had disengaged the lock on approach as prescribed by the checklist revision.

Post-accident interviews with the pilots indicated that the SIC had been focused on proving that he deserved to be designated as a qualified first officer during the flight to Kupang and likely had been overly conscious of his “repeated error [of] delay on moving the power levers to ground idle during landing,” the report said, noting that these factors likely contributed to his inadvertent selection of ground idle thrust during the approach.

After the accident, the NTSC supervised tests conducted in an MA60 flight simulator flown by instructor pilots for Merpati Nusantara. The tests simulated a gradual reduction of power beginning at 1,500 ft on approach and selection of ground idle at about 200 ft. The result in each case was a rapid descent from which recovery was not possible, the report said.

At the time of the accident, the state-owned airline operated a diverse fleet that comprised Boeing 737s, CASA 212s and de Havilland Twin Otters, as well as 14 MA60s. Management personnel told investigators that after the first two MA60s entered the fleet, the airline encountered several problems with the power lever lock system, “whereas the automatic power lever lock system sometimes failed to open after landing,” the report said.

Based on recommendations by its board of instructors, the airline revised its MA60 “Approach” checklist in April 2012 to include the item “PL LOCK … OPEN.” The checklist specified that the power lever lock must be opened (disengaged) on approach by the pilot monitoring.

Although Xian had revised the master minimum equipment list in 2008 to include provisions for operating the MA60 with the electromechanical lock inoperative, the flight crew operating manual did not include any procedure for disengaging a functioning lock on approach. The report noted that manual disengagement of the electromechanical lock does not cause a caution light to illuminate or an aural warning to sound.

The NTSC concluded that the lock is a “safety device” according to airworthiness regulations and that any change in procedure related to the device would require specific approval by Indonesia’s Directorate General of Civil Aviation (DGAC).

Moreover, the report said that the airline’s board of instructors had not explored factors that might have contributed to the operational problem experienced in the first MA60s introduced to the fleet. “The problem might exist due to aircraft system problem, runway condition or pilot operation error,” the report said. “The investigation could not find any evidence of safety assessment, risk analysis and approval related to the checklist revision.”

Among the actions taken by Merpati Nusantara Airlines after the accident was the removal from the “Approach” checklist of the item requiring disengagement of the electromechanical power lever lock.

The airline also revised its training procedures to caution pilots against touching, in flight, the tabs beneath the power lever handles that disengage the mechanical ground idle stops.

Based on the findings of the accident investigation, NTSC recommended that the DGAC review its oversight of changes made by operators to safety-related procedures and to specifically review the MA60 master minimum equipment list to ensure that it complies with airworthiness requirements. 