Tossed by a Thunderstorm

A regional jet plummeted 4,000 ft in severe turbulence and icing before the pilots regained control. 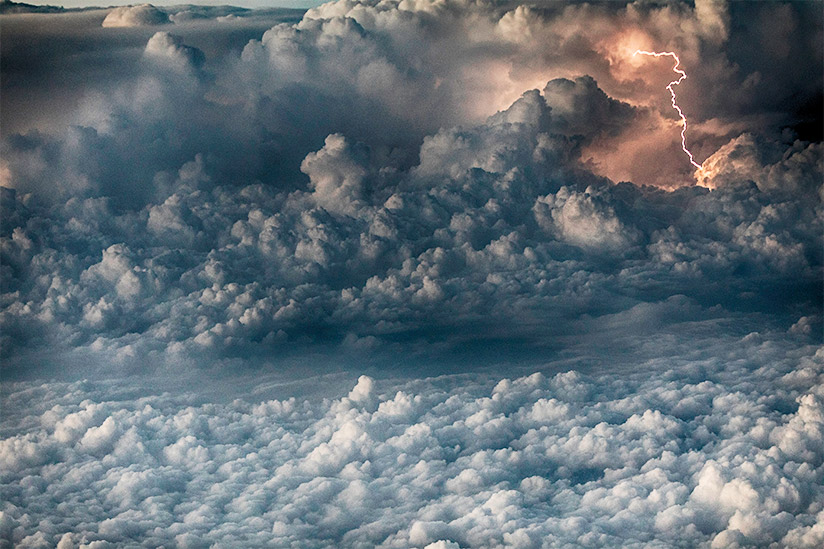 A line of thunderstorms associated with a cold front and topping out above 52,000 ft was moving east over southern Ontario, Canada, the afternoon of Sept. 5, 2014. An air traffic control ground hold due to the severe weather was in effect at the airport in Grand Rapids, Michigan, U.S., providing time for the flight crew of an Embraer 145LR to take another look at the convective activity on their cellphone weather apps and plot a viable route to their destination: Newark (New Jersey, U.S.) Liberty International Airport.

“The flight crew decided that the line of thunderstorms appeared to be fragmented enough, with sufficient openings, to allow them to deviate from their planned route around the weather system,” said the report by the Transportation Safety Board of Canada (TSB).

The aircraft, operated as ExpressJet Airlines Flight 4538, departed from Grand Rapids at 1845 local time carrying 26 passengers, a flight attendant and the two pilots.

The captain was the pilot flying. He had about 10,000 flight hours, including 7,000 hours in type and 5,000 hours as pilot-in-command. “A company check airman, the captain had been employed by the operator for 10 years and had completed his most recent recurrent aircraft type training in April 2014,” the report said.

The first officer had about 3,400 flight hours, including 2,200 hours in type. He had been employed by the operator for three years and had completed recurrent aircraft type training in July 2014.

Under the original flight plan, the Embraer was to head southeast after departure. However, following the route they devised to avoid the severe weather, the flight crew initially deviated 50 nm (93 km) north-northeast after departing from Grand Rapids. “After its initial deviation, the aircraft turned east, paralleling a line of thunderstorms south of its position,” the report said. “The aircraft was in visual meteorological conditions (VMC).”

The Embraer encountered light turbulence while climbing to Flight Level (FL) 370 (approximately 37,000 ft), which is the aircraft’s maximum operating altitude. Soon after the aircraft reached FL370, the turbulence began to intensify. The crew established a cruise speed of 0.63 Mach, the recommended airspeed for turbulence penetration.

“While flying eastbound, the crew used the onboard weather radar system to see the weather system ahead,” the report said. “As the aircraft was in VMC, the flight crew also visually identified openings between the thunderstorms ahead. As the flight progressed, the crew observed the thunderstorms billowing, closing the gaps in the route ahead.”

The pilots were in radio communication with Toronto Area Control Centre, which approved their request to deviate as necessary to avoid the severe weather. “As the aircraft continued eastward, the flight crew could not locate an opening that would enable them to continue flying toward their destination,” the report said. “At 1908, the flight crew communicated with the company dispatch [office] via the aircraft communication and recording system to request a route through the weather system, stating that they needed help picking their way through the storms and that the gaps between storm cells were closing quickly.”

At the time, the aircraft was eastbound and nearing the lower west shore of Lake Huron. The dispatcher studied his flight-following and weather display, and suggested that the flight crew turn south and proceed to Sarnia, Ontario, which is on the south shore of Lake Huron, and then to proceed east-southeast toward Erie, Pennsylvania, U.S., on the southern shore of Lake Erie.

The crew adjusted the thrust setting several times during the next few seconds. Airspeed eventually increased to 0.79 Mach, which is above the aircraft’s maximum operating Mach number of 0.78. “The turbulence became more intense, with peak values of 0.41 g and 1.7 g,” the report said. “The roll attitude became unsteady, with the aircraft banking at angles ranging between 45 degrees left and 14 degrees right.”

The autopilot automatically disengaged, and the aircraft began to climb, likely due to strong thunderstorm updrafts. The crew re-engaged the autopilot, but it disengaged again seconds later as the turbulence intensified even more. The aircraft was in a slight (1.7 degree) nose-down pitch attitude as angle-of-attack changed from 3.8 degrees to minus 9.9 degrees and airspeed decreased through 0.68 Mach. The Embraer continued to climb.

At 1916, the aircraft reached a peak altitude of 37,600 ft — 600 ft above its maximum operating altitude. “At this point, the uncommanded right bank angle reached 45 degrees, and the turbulence momentary peak values were 0.44 g and 1.6 g,” the report said. “No significant elevator and trim deflections that would have contributed to the climb were commanded.”

After reaching 37,600 ft, the aircraft stalled, pitched 11 degrees nose-down, rolled 30 degrees right and began a rapid descent. “The flight crew increased the thrust … and, using flight control inputs, commanded an additional right roll,” the report said. “The roll inputs by the flight crew during the uncommanded descent were contrary to known aircraft upset-recovery techniques. The correct technique is to roll the aircraft in the shortest direction to wings-level.”

The crew’s roll inputs contributed to the aircraft reaching a right bank angle of 63 degrees. “The pitch attitude increased to 13 degrees nose-down, and the aircraft reached a descent rate of 3,100 feet per minute (fpm),” the report said. “The crew briefly applied left roll inputs, and the right bank angle decreased from 63 degrees to 33 degrees.”

The Embraer encountered severe icing conditions during the upset, and the wing, stabilizer and engine anti-ice systems automatically activated. The aircraft was in a 42-degree right bank as it descended through 36,800 ft at 4,400 fpm. The crew again applied right roll inputs, and the bank angle increased to 77 degrees. “The pitch attitude increased to 17 degrees nose-down,” the report said “The aircraft’s speed was accelerating through 0.76 Mach, and the severe turbulence persisted.”

The crew then applied left roll inputs, reducing the right bank angle to 26 degrees. At this point, the descent rate was 7,500 fpm and the pitch attitude was 24 degrees nose-down. The crew reduced thrust as the aircraft descended through 36,400 ft. “Over a period of 6 seconds … the aircraft’s pitch attitude decreased to 5 degrees nose-down and the descent rate decreased to 6,900 fpm,” the report said. The turbulence subsided somewhat, from severe to moderate.

The flight crew recovered control at 33,600 ft, after the aircraft had plummeted 4,000 ft. “During the period of loss of control, the aircraft had sustained an average turn rate of 200 degrees per minute, which had changed its heading from 180 degrees magnetic (M) to 240 degrees M, and had reached a peak descent rate of 9,300 fpm,” the report said. “Severe turbulence had persisted throughout this period of upset and loss of control.”

Toronto Centre had repeatedly tried to hail the crew. “The flight crew’s only response was ‘stand by,’ but this was said with a tone and volume that suggested that something of an urgent nature was occurring,” the report said.

While the crew climbed back to their assigned altitude, FL370, the aircraft encountered light to moderate turbulence and icing conditions. The Embraer was still on a heading of 240 degrees when the crew asked Toronto Centre for a heading that would take them out of the weather system “Again the tone of voice and volume suggested urgency,” the report said. “Toronto [Centre] suggested a southbound heading; the aircraft turned southbound and shortly afterward exited the weather system.”

The crew then turned east, toward Newark, and subsequently landed the aircraft without further incident. None of the occupants had been hurt during the upset. The crew reported a severe-turbulence encounter to ExpressJet. “As a result, maintenance [technicians] performed a severe turbulence inspection on the aircraft and downloaded the [FDR data] in accordance with the EMB-145 aircraft maintenance manual,” the report said. “There was no damage reported or discrepancies noted. The aircraft was released back into service.”

TSB investigators also analyzed the FDR data and found that overspeed conditions (exceedances of the maximum Mach number) had occurred just before and during the upset and might have caused structural damage to the aircraft. “As a result, the TSB notified the operator, which subsequently performed an overspeed inspection,” the report said. Apparently, no damage was found during the overspeed inspection.

Both pilots held U.S. Federal Aviation Administration (FAA) certificates. FAA regulations did not require formal upset-prevention and recovery training when the incident occurred, and such training was not provided by ExpressJet. The report said, however, that the company’s flight-simulator training did include two scenarios involving recoveries from nose-high and nose-low pitch attitudes and bank angles selected by the instructors.

“Although the flight crew had been previously exposed to upset-recovery training, the occurrence was their first exposure to an event involving an upset with turbulence of this degree,” the report said. “Because of current fidelity limitation inherent in full-motion flight simulators and because training scenarios involve some level of expectation, it is difficult to replicate an aircraft upset with turbulence of the severity encountered by the occurrence flight crew.”

The upset-recovery training that the pilots had received at ExpressJet had not prepared them for the magnitude of the turbulence they encountered. They “were not proficient in recovering from an upset of this nature,” the report said. “During the loss of control, the flight crew momentarily applied flight control inputs that exacerbated the roll attitude of the aircraft. As a result, the altitude loss and recovery time were increased.”

A Question of Reflectivity

ExpressJet used WSI Fusion software for flight following and weather monitoring. Although the route that the dispatcher suggested to the pilots appeared to be feasible, based on what he was seeing on his display, U.S. National Oceanic and Atmospheric Administration (NOAA) ground radar was showing a large and unbroken line of thunderstorms on the route. “The difference in the two depictions was due in part to radar reflectivity types,” the report said. “The dispatcher’s display is a base reflectivity product, which uses the lowest reflectivity angle, while the NOAA display shows a composite radar return, which uses the maximum reflectivity from all of the multiple [ground radar] elevation angles.”

Moreover, the flight-following software that the dispatcher was using is a weather-avoidance tool. When the flight crew requested assistance, they were already in the convective activity and attempting to navigate between storm cells. “As a result, the flight-following software was not used as intended (i.e., as a proactive tool to avoid weather) but rather as a reactive response to a thunderstorm encounter,” the report said. “Had the flight crew requested dispatch assistance earlier, a suggestion to help them avoid the weather system completely may have been provided.”

The weather radar system aboard the Embraer was a Honeywell Primus 660. “The weather radar system can see rain, wet snow, wet hail and dry hail (depending on its diameter),” the report said. “It cannot see water vapour, ice crystals or small, dry hail.” Among the limitations of airborne radar systems is attenuation, in which heavy precipitation can effectively block the radar signal. “The greater the intensity of the precipitation, the shorter the distance the radar can see when looking into and through a storm,” the report said. Grease, dirt and cracks on the aircraft’s radome also can impair the transmission of the radar signal, as can a film of water that might form on the radome at certain altitudes and airspeeds.

Correct management of range, tilt and gain settings also is critical to the effective use of weather radar. Investigators were unable to determine how the crew was using their system. “As the FDR does not record parameters from the weather radar unit, it could not be determined with certainty which settings the flight crew were using,” the report said.

The TSB issued no formal recommendations based on the findings of its investigation. The report noted, however, that ExpressJet conducted an internal assessment of its flight operations and took action to improve how dispatchers use its flight-following software. The company also developed a pilot training module on the use of weather radar systems.

Board recommends action to help forecasters cope with erroneous reports from weather sensors.