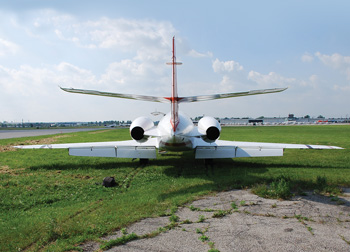 The flight crew of a Skycharter Dassault Falcon 10 flew a fast, unstabilized approach to ­Toronto/Buttonville Municipal Airport (CYKZ) after a six-minute flight from a nearby airport, overshooting the runway centerline before the airplane touched down and veered off the pavement, accident investigators said.

Neither of the two pilots — the only people in the airplane — were injured in the June 17, 2011, accident, which damaged the airplane’s nose, right wing, slats and engines.

The Transportation Safety Board of Canada (TSB), in its final report on the crash, cited the “unstabilized approach with excessive airspeed” and “the lack of adherence to company standard operating procedures and crew resource management, as well as the non-­completion of checklist items by the flight crew” among the accident’s causes and contributing factors.

The flight began with takeoff at 1500 local time from Toronto’s Lester B. Pearson International Airport. The crew completed the “After Takeoff” checklist and began a climb to 5,000 ft above sea level (ASL); at 1501, air traffic control (ATC) altered the clearance to 4,000 ft.

Less than one minute later, ATC cleared the pilots to descend to 3,000 ft. Over the next 30 seconds, the airplane descended, reaching a groundspeed of 290 kt, and the crew tried repeatedly to read back the clearance, at one point switching radio frequencies to reach a controller who could receive the transmission.

At 1503:25, the Toronto area control center controller cleared the Falcon for a contact approach to Runway 33 at Buttonville. The report said the controller included instructions to “begin the descent and to keep the approach tight, as there was traffic to follow.

“At that point, the aircraft was approximately 3.0 nm [5.6 km] from the airport, descending through 2,600 ft ASL with a groundspeed of 230 kt and heading towards the threshold of Runway 33 on a tight left base.”

The Dassault Falcon 10, an executive-transport, twin-turbofan business jet first produced in 1973, was a scaled-down version of the Mystère 20/Falcon 20. It was designed to seat up to seven passengers and had a maximum takeoff weight of 8,500 kg/18,740 lb, a maximum cruising speed of 494 kt and a range (with four passengers and a 45-minute fuel reserve) of 1,918 nm/3,555 km.

Source: Jane’s All the World’s Aircraft

At 1504:20, a “pull up” alert was sounded by the ground-proximity warning system (GPWS), and the first officer, using “a low tone of voice and … non-standard phraseology,” called a missed approach, the report said. “The captain responded but continued the approach.”

Another “pull up” alert followed, as the captain called for full flaps and entered a steep bank to the right on short final.

At 1504:49, the Falcon “touched down hard on the main landing gear in a nose-high attitude, then immediately departed the runway surface to the right,” the report said, estimating the airplane’s goundspeed at less than 110 kt.

Braking and steering responses were minimal because of the grass surface, and the Falcon struck a runway/taxiway identification sign before it crossed a taxiway intersection and stopped. About 1506, the pilots shut down the engines and exited through the main cabin door.

Both the captain and the first officer held airline transport pilot licenses, and both had undergone recurrent training, including crew resource management training, in the Falcon 10 in January 2011. The two were always paired as a flight crew, and they flew only the accident airplane. They had flown 10 hours in the 30 days before the accident and 28 hours in the 90-day period before the occurrence.

They did not typically fly this route or other short flights, the report added.

The accident airplane, which had been in service with the operator for about 20 years, had 12,697 hours total time and was maintained according to current regulations and an approved maintenance program.

The company’s standard operating procedure (SOP) called for its flight crews to use the Falcon 10 checklist for all flights, with “no deviation from these procedures … unless the captain determines that the safety of flight may be compromised,” the report said. During the accident flight, the pilots used the checklist until after the takeoff phase of flight but not for cruise, pre-descent, approach and landing.

In addition, the crew did not make the standard callouts required if there are deviations from the specified airspeed, altitude, localizer or glideslope, and if the angle of bank exceeds 30 degrees, the report said.

Skycharter’s SOP required its flight crews to conduct a missed approach if aircraft did not “meet the approach window criteria within 500 ft above touchdown,” the report said. Those criteria included that indicated airspeed be plus or minus 10 kt of the approach speed and not lower than VREF (the reference landing speed, usually defined as 1.3 times stall speed with full landing flaps or selected landing flaps); that the airplane be within a one-dot deflection of the localizer and glideslope; and that the airplane be in landing configuration, except for full flaps.

“According to the SOP, the airspeed for a visual flight rules (VFR) pattern should be 160 kt on the downwind leg of the circuit, 140 kt on the base leg and VREF plus 10 kt on the final approach,” the report said. “Prior to takeoff on the occurrence flight, the crew determined that VREF was 117 kt for the calculated landing weight of 17,000 lb. The aircraft was cleared to fly directly to CYKZ and joined the circuit on base leg. At this point, the aircraft’s calibrated airspeed was 186 kt.”

Canadian Aviation Regulations prohibit operation of aircraft at airspeeds of more than 250 kt below 10,000 ft ASL or more than 200 kt below 3,000 ft above ground level or within 10 nm (19 km) of a controlled airport, unless ATC authorizes a higher airspeed.

The report noted that a 1999 Flight Safety Foundation study found that unstabilized approaches were causal factors in 66 percent of 76 approach-and-landing accidents that occurred from 1984 to 1997.1

“In this occurrence,” the report said, “there were several indicators of an unstabilized approach. These included excessive bank angle, activation of the GPWS, late extension of flaps, excessive flight-parameter deviations when crossing the minimum stabilization heights, and deviation down to the runway threshold.”

The report noted that the Skycharter SOP did not include procedures to be followed in case of a GPWS alert and added that operators without such procedures “may place crews and passengers at risk in the event that a warning is received.”

‘There Was No Need’

The report said that, “considering the entire flight was approximately six minutes in duration and below 4,000 ft ASL, there was no need to fly at the speeds attained during the flight. Although radar indications provided groundspeed values, it was determined that, even after the conversions to indicated airspeed values, the aircraft was flown in excess of the current regulations and Skycharter’s SOP.”

“The excessive speed, and the fact that the crew did not routinely fly this route or other short routes, reduced the amount of time available to perform all the tasks dictated by the company SOP, the required checklist items and the approach briefing. This resulted in the crew flying an unstabilized approach.”

Because of the excessive speed, the airplane overshot the final approach track as the crew attempted to comply with ATC’s request to “keep the circuit tight,” the report said, noting that the Falcon’s airspeed was about 140 kt as it passed through the final approach course and that at one point it entered a left turn with more than 30 degrees of bank. At that point, the report said, “the distance to the runway threshold continued to reduce quickly, and manoeuvres to regain runway heading became more aggressive and non-standard.”

The report also noted among the accident’s causes and contributing factors that “the captain’s commitment to landing or lack of understanding of the degree of instability of the flight path likely influenced the decision not to follow the aural GPWS alerts and the missed approach call from the first officer” and that “the non-standard wording and tone used by the first officer [in his call for a missed approach] were insufficient to deter the captain from continuing the approach.” 