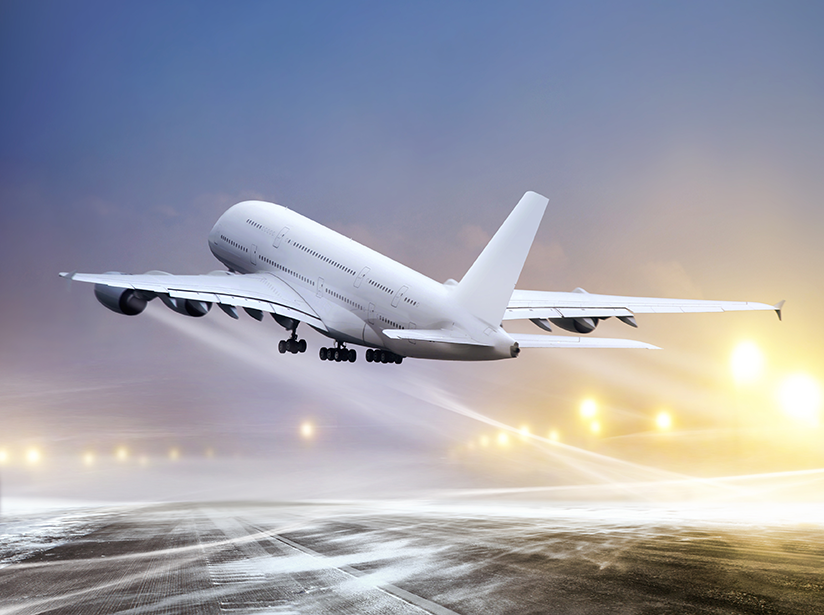 New takeoff and landing performance assessment (TALPA) methods have been put in place at U.S. airports to help reduce risks of runway overruns caused by standing water, snow, ice or other contaminants on the runway.

Implementation of the new methods on Oct. 1 nearly coincided with the U.S. National Transportation Safety Board’s (NTSB’s) issuance of related recommendations to the U.S. Federal Aviation Administration (FAA). The recommendations were included in the NTSB’s final report on a March 5, 2015, runway excursion accident involving a Boeing MD-88 at LaGuardia Airport in New York (see “Lost in Reverse“).

Twenty-nine passengers received minor injuries in the accident, and the airplane was substantially damaged; five crewmembers and 98 passengers were uninjured.1

In the report, issued in September, the NTSB said that the accident “demonstrates the continuing need for objective, real-time, airplane-derived data about runway braking ability for flight crews preparing to land with runway surface conditions that are worse than bare and dry.”

The NTSB said that because LaGuardia was not using continuous runway-friction–measuring equipment, it was not taking advantage of “a tool that would allow the airport to objectively assess the effectiveness of snow-removal operations on contaminated runways.”

The NTSB also criticized the FAA winter operations airport safety guidance that was in place at the time of the accident as “not sufficiently clear about the timing and need for updated runway condition reports.”

That guidance was outlined in an advisory circular (AC) issued first issued in 1988 and updated several times, including in the aftermath of a December 2005 accident in which a Boeing 737 overran a runway on a snowy evening at Chicago Midway International Airport, where other pilots had reported poor braking action (ASW 2/08, p. 28).2 The AC has been updated several times, most recently in July 2016.

The FAA says its revised TALPA provisions provide more accurate determinations of the distance required to safely stop an aircraft after landing or after a rejected takeoff.3

The provisions were developed based on the work of the TALPA Aviation Rulemaking Committee.

“As a result of the committee’s work, the FAA has developed a revised method for airports and air traffic controllers to communicate actual runway conditions to the pilots in terms that directly relate to the way a particular aircraft is expected to perform,” the agency said. “The TALPA initiative improves the way the aviation community assesses runway conditions, based on contaminant type and depth, which provides an aircraft operator with effective information to anticipate airplane braking performance.”

A key element of the TALPA initiative is the new Runway Condition Assessment Matrix (RCAM). Using data supplied by airplane manufacturers and presented in a standardized format, operators assess and report runway conditions, and pilots use that information — along with manufacturer’s data — to determine their aircraft’s expected stopping performance.

The agency added that aircraft operators input runway surface condition information into the federal Notices to Airmen system to generate runway condition codes. Those codes may vary for each one-third of a runway, if different contaminants are present on each third.

Figure 1 shows the RCAM, with assessment criteria ranging from zero — signifying “wet ice, slush over ice, water on top of compacted snow, or dry snow or wet snow over ice” — to 6 — signifying “dry.” The RCAM includes assessments of braking action, ranging from “nil” — described as “minimal to nonexistent for the wheel braking effort applied or directional control is uncertain” — to “good” — described as “braking deceleration is normal for the wheel braking effort applied and directional control is normal.”4 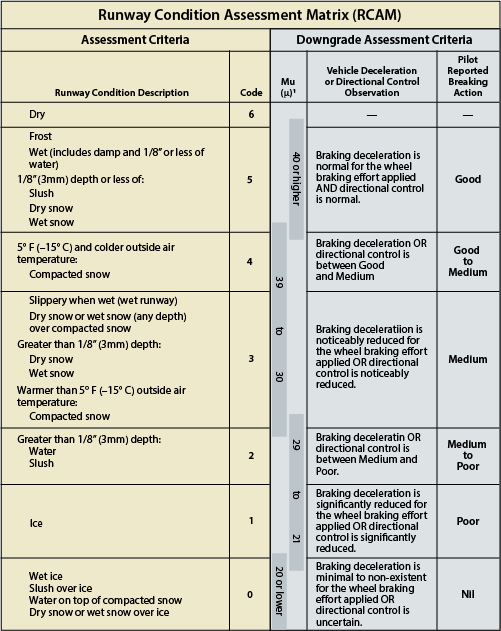 Pilot reports on braking action still will be used to assess aircraft braking performance, the FAA said, adding that the term “medium” is now being used to describe braking performance that previously was considered “fair.” Airports are no longer reporting braking action as “nil” — or no braking action — because “nil conditions on any surface require the closure of that surface,” the FAA said, adding that such surfaces will be reopened only when the airport operator determines that nil braking conditions no longer exist.

Compliance with the new TALPA standards is required at all federally obligated airports — all airports that accept grants from the U.S. government.

In its report on the LaGuardia accident, the NTSB recommended that the FAA and the aviation industry continue developing technology that would allow the installation in transport-category airplanes of equipment “to routinely calculate, record and convey the airplane braking ability required and/or available to slow or stop the airplane during the landing roll.”

The report noted that the pilots of the accident airplane were “frustrated by the unavailability of timely braking action reports … and the resulting uncertainty about the runway conditions.”

In 2007, after its investigation of the Midway overrun, the NTSB issued safety recommendations to the FAA that were intended to address concerns about the lack of objectivity in pilots’ braking action reports and in airports’ reports of the type and depth of runway contaminants.

One of the 2007 recommendations called for minimum standards for “correlating an airplane’s braking ability to braking action reports and runway contaminant type and depth reports for runway surface conditions worse than hard and dry.” The new RCAM — with its standard criteria for reporting runway surface conditions and corresponding performance data to be used for flight planning — addresses that issue, the NTSB said in the LaGuardia accident report.

However, the NTSB said, implementation of the RCAM does not address the second recommendation, which called on the FAA to “demonstrate the technical and operational feasibility of outfitting transport-category airplanes with equipment and procedures required to routinely calculate, record and convey the airplane braking ability required and/or available to slow or stop the airplane during the landing roll,” and, “if feasible, require operators … to incorporate use of such equipment and related procedures into their operations.”

The report said that the FAA has sponsored development of these systems. One system is designed to “calculate the friction coefficient developed by an airplane during a landing and quickly transmit the results of the calculation and other measurements to an on-ground network for processing and distribution to the company’s customers,” the NTSB said. “Therefore, the NTSB recommends that the FAA continue to work with industry to develop the technology to outfit transport-category airplanes with equipment and procedures to routinely calculate, record and convey the airplane braking ability required and/or available to slow or stop the airplane during the landing roll.”

Although the FAA has sponsored development of the systems, the NTSB expressed concern that, when they become commercially available, their information might be available only to operators that have installed the necessary equipment in their aircraft.

“The NTSB believes that the safety-related information provided by these systems should be in a form that will facilitate timely reporting of the results to all arriving aircraft, among other relevant NAS [National Airspace System] stakeholders,” the NSTB said. “As a result, the FAA will need to develop policies and procedures for disseminating the information from these systems.”

Therefore, the NTSB recommended that, when the systems are ready, the FAA should work with manufacturers and operators “to develop procedures that ensure that airplane-based braking ability results can be readily conveyed to, and easily interpreted by, arriving flight crews, airport operators, ATC [air traffic control] personnel and others with a safety need for this information.”

The NTSB noted, however, that the FAA has consistently said it will encourage, but not require, the use of airplane-based systems. Even so, the NTSB said that past successes involving the introduction of other voluntary safety programs, including flight operational quality assurance (FOQA) and the Aviation Safety Action Program, might prompt many operators to install the systems in their aircraft even if the FAA does not require them to do so.