No fatalities resulted from major accidents among the world’s commercial jet transport aircraft.

The accident tally does not include two fatal events involving large commercial jet aircraft — the Germanwings Airbus A320 that investigating authorities say was deliberately flown into the ground in the French Alps by its first officer on March 24, and the Metrojet A321 that is believed by investigators to have been destroyed by a bomb after departing Sharm el-Sheikh, Egypt, on Oct. 31. Together, these events killed all 374 passengers and crewmembers. Because they have been considered deliberate actions, they are not classified as aviation accidents.

Four of the major accidents in 2015 were classified as controlled flight into terrain (CFIT). Two of these involved commercial jet transport aircraft that undershot the runway, and two involved commercial turboprop aircraft — one during the en route phase of flight and another during initial descent for landing.

Figure 1 shows the number of all commercial jet major accidents by year since 2002, including the subsets of accidents that involved Eastern-built aircraft.

Figure 2 shows the commercial jet accident rate in accidents per million departures and the rate’s five-year running average, which indicates a continuing declining trend. The accident rate is for Western-built jets only because, even though we know the number of major accidents that involved Eastern-built jets, we do not have reliable exposure data (hours flown or departures) to calculate rates.

Note: Total departure data are not available for Eastern-built aircraft 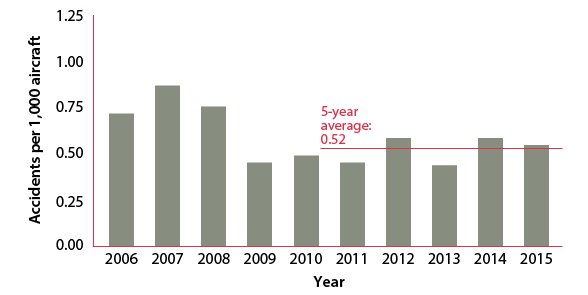 There were 14 Eastern- and Western-built commercial turboprop accidents involving a total of 15 airplanes in 2015. Of these, two were classified as CFIT — a Trigana Air Service ATR42 crashed on approach to Oksibil, Indonesia, resulting in 54 fatalities, and an Aviastar Mandiri Twin Otter crashed while in cruise flight over Sulawesi, Indonesia, resulting in 10 fatalities.

Half of the major accidents involving commercial turboprops were classified as LOC-I accidents, and one as a runway excursion; four were unclassified. One of the unclassified accidents, as noted, was a midair collision above Vršatec, Slovakia, involving two Let L-410s operated by the same company. The aircraft were carrying parachutists, and although a number of those on board survived, there were seven fatalities, according to preliminary reports. 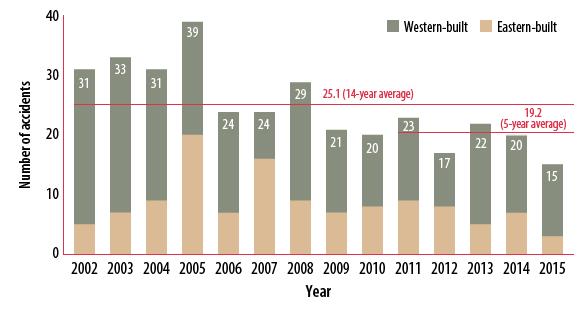 Although there has been a reduction in the number of accidents recorded for commercial turboprops during 2015, and the sample size is relatively small, LOC-I stands out as the dominant factor worthy of further attention.

For business jets, major accident rates remain relatively low and appear to be trending toward a plateau. However, as with turboprops, LOC-I is the dominant factor in most accidents. Flight Safety Foundation’s Global Safety Information Project (ASW, 12/15-1/16) was established to help identify types of safety data collected within the industry and to find examples of how such information has led to improvements that can be shared to benefit the industry as a whole. The project has revealed opportunities for airlines and other aircraft operators to take advantage of the information already contained within their safety data collection systems to identify further safety enhancements. A number of airlines have already identified such opportunities to enhance the risk resilience of their organizations.

The worldwide commercial airplane fleet at the end of 2015 was about the same size as reported a year earlier and made up of the following:

During 2015, 3.7 billion passengers were carried on 32 million flights in Western-built jets.