The first six months of 2017 saw significantly fewer incident than predicted earlier in the year. 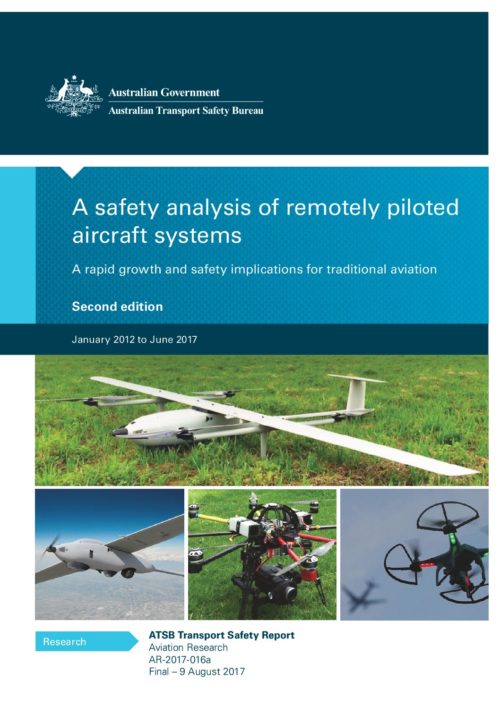 The Australian Transport Safety Bureau (ATSB) has revised its forecast of the likely number of drone-involved safety occurrences this year, saying that “significantly fewer” events occurred in the first half of 2017 than previous projections had indicated.

In a report released earlier this month, the ATSB said it still expects the rapid increase in the number of drones — also known as remotely piloted aircraft systems (RPAS) and unmanned aircraft systems, among other terms — to continue. That growth “presents an emerging and insufficiently understood transport safety risk,” according to the report, the second edition of A Safety Analysis of Remotely Piloted Aircraft Systems, 2012 to 2016. The first edition was issued in March.

Both the number of drones and the number of safety occurrences involving drones increased rapidly from 2012 through 2016, the new report said.

“However, the first half of 2017 saw significantly fewer occurrences than predicted, given the previous data,” the report added. “Current forecasts, incorporating data up to the end of June 2017, predict the number of RPAS occurrences reported to the ATSB in 2017 to be comparable to 2016.”

The March report had said that near encounters between manned aircraft and drones were likely to increase by around 75 per cent in 2017 from the 69 near encounters reported in 2016.

Data show that more than half of the occurrences reported from January 2012 through June 2017 were near-encounters with manned aircraft, and that nearly three-quarters of those occurred between January 2016 and June 2017. Most occurred in Sydney and other capital cities, and most occurred above 1,000 ft above mean sea level.

There have been no reported collisions in Australia between drones and manned aircraft, the report said, noting that five such collisions have been reported worldwide. Of these, three resulted in no significant damage, one resulted in a crushed wing on a sport biplane in the United States, and one resulted in a fatal accident involving a motor glider in Germany that killed both occupants of the glider.

Panel Urges Evaluation of Effects of Drones on Society

The increasing use of drones in security patrols, emergency response, cargo transport and other areas…

FAA Faulted on Incomplete Use of Drone Data