Long-time board members were instrumental in securing the future of the Foundation. 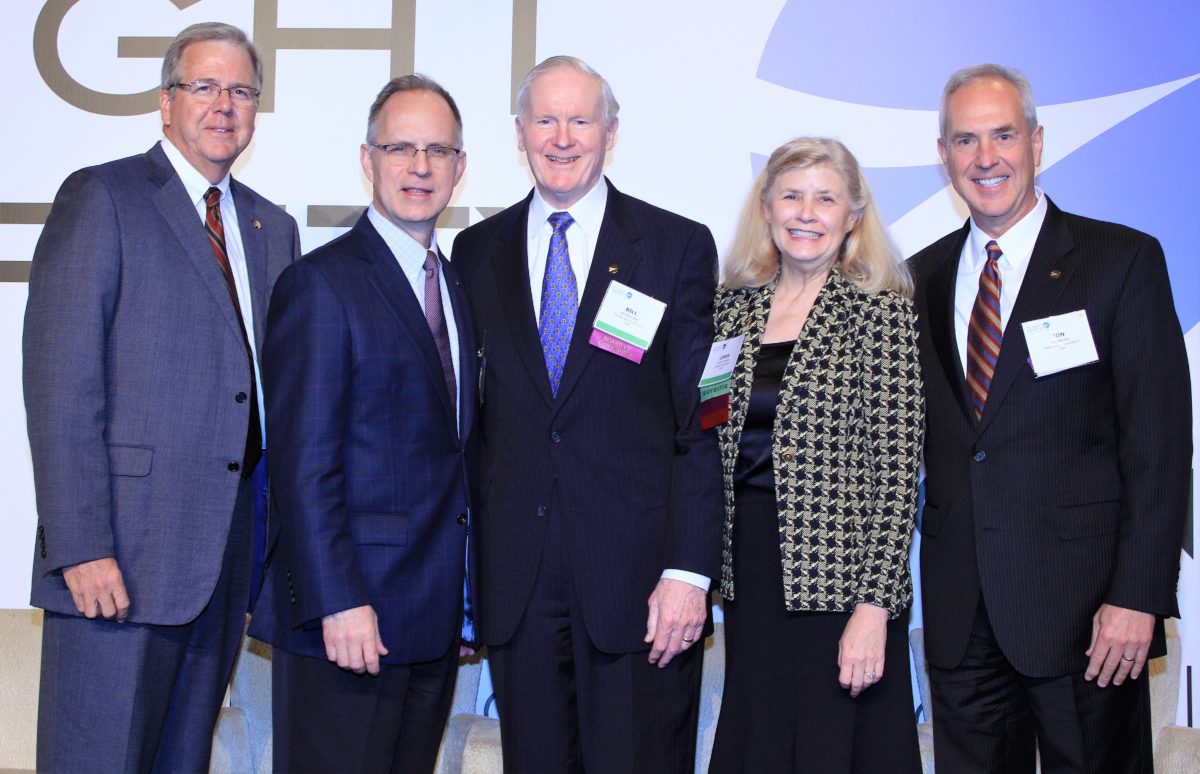 DUBAI, United Arab Emirates — Three long-serving members of Flight Safety Foundation’s Board of Governors were recognized Monday for their contributions to the Foundation and, more broadly, to aviation safety during an award ceremony on the opening day of the 69th annual International Air Safety Summit in Dubai. The three, all of whom are completing their terms on the Foundation Board, were recognized for their dedication to the Foundation, for their leadership and for helping to keep the Foundation in a position to make significant safety contributions across the industry.
Dave Barger, treasurer of the Foundation as well as a board member, was presented with the first FSF Chairman’s Award for Outstanding Service to Aviation Safety. Barger, former president and chief executive officer of JetBlue Airways and this year’s recipient of the L. Welch Pogue Lifetime Achievement Award from the International Aviation Club of Washington and Aviation Week & Space Technology, has been integral to the Foundation’s present and future. He helped guide the Foundation to financial health through his leadership and personal commitment to the organization. He provided the Foundation with a CEO’s perspective on safety and an unselfish dedication of time and resources.
Capt. Linda Orlady received the FSF President’s Citation. Orlady is president of Orlady Associates. She formerly was a chief pilot at Boeing, a long-time pilot at United Airlines, and a safety expert at the Air Line Pilots Association, International, and has long been an active contributor to the Foundation, serving not only on the board but also on number of FSF committees. She chaired the Foundation’s internal “think tank” known as the Icarus Committee and has worked tirelessly to promote aviation safety and the Foundation.
William O. “Bill” McCabe, who also received the FSF President’s Citation, was recognized for his leadership and organizational skill in implementing a new governance strategy and new bylaws for the Foundation. McCabe, a 25-year veteran of the U.S. Air Force with extensive flying and staff leadership experience, also spent 16 years with the DuPont Co. and has served as an executive adviser to the U.S. Federal Aviation Administration on issues involving air traffic operations. On the Foundation Board, he chaired the Nominating and Governance Committee and personally recruited many of the current board members.
“It is an honor to have served with all three of these outstanding individuals,” said Jon Beatty, president and CEO of the Foundation. “It would be difficult to overestimate their contributions to the Board and to the Foundation over the last decade or more. They will be missed, but the structures and processes they have helped implement will serve the Foundation well for years to come.”

Flight Safety Foundation is an independent, non-profit, international organization engaged in research, education, advocacy and publishing to improve aviation safety. The Foundation’s mission is to be the leading voice of safety for the global aerospace community.

Gamlin is manager of air safety investigation at Rolls-Royce.

ALEXANDRIA, Va. — Kenneth J. Hylander, chairman of Flight Safety Foundation’s Board of Governors, has been selected to chair a National Academies of Sciences, Engineering, and Medicine committee on aviation…