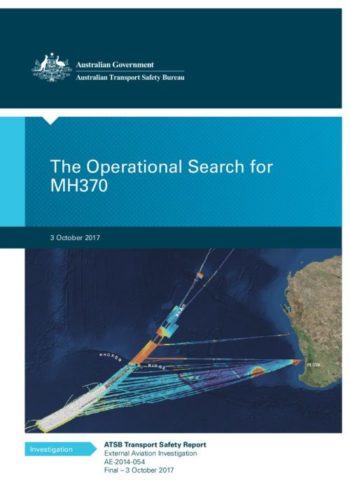 In the wake of the disappearance of Malaysia Airlines Flight 370 (MH370) more than three years ago, the Australian Transport Safety Bureau (ATSB) is recommending that aircraft operators and airframe and equipment manufacturers investigate ways to provide high-rate and/or automatically triggered global positon tracking in existing and future fleets. In its 440-page final report on the unsuccessful search for MH370, the ATSB also said that countries should ensure that sufficient mechanisms are in place to ensure the rapid detection of, and response to, loss of aircraft position or contact throughout all areas of operation.

“It is almost inconceivable and certainly societally unacceptable in the modern aviation era, with 10 million passengers boarding commercial aircraft every day, for a large commercial aircraft to be missing and for the world not to know with certainty what became of the aircraft and those on board,” ATSB said in the report’s executive summary.

The Malaysian government continues to investigate the March 8, 2014, disappearance of MH370, a Boeing 777 that was lost on a flight from Kuala Lumpur, Malaysia, to Beijing with 239 people on board. The search for the aircraft continued for 1,046 days, until Jan. 17, 2017, when it was suspended in accordance with a decision made by the governments of Malaysia, Australia and China.

“The reasons for the loss of MH370 cannot be established with certainty until the aircraft is found,” the ATSB said. The intent of the just-released report, The Operational Search for MH370, is to document the search, in particular the underwater search, including where the search was conducted and why; how the search was conducted; the results of the search; and an analysis that defines an area where any future underwater search should be conducted, ATSB said.

The report also recommended that the International Civil Aviation Organization encourage or mandate the publication of relevant search, research and recovery operations information for the benefit of future research. The lack of availability of search and rescue information limits the ability of researchers to determine the factors that help or hinder a search, the ATSB said.

The staff of the Flight Safety Foundation extends its thoughts and prayers to the passengers, crew and families of MH370 during this time of uncertainty.  We applaud the international cooperation…