NTSB is concerned the unsafe wiring could lead to arcing and may cause fires. 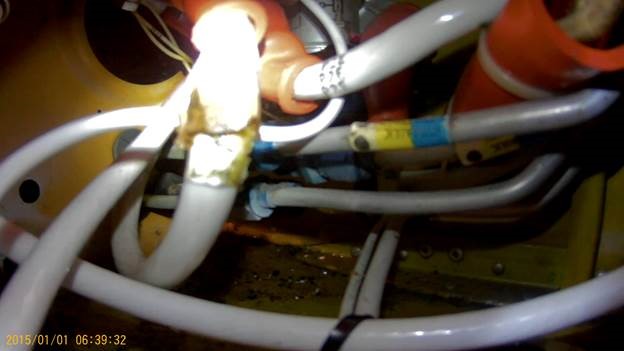 The U.S. National Transportation Safety Board (NTSB) has issued an urgent safety recommendation to the Federal Aviation Administration (FAA) concerning unsafe wiring on Piper PA-31T-series airplanes that may lead to arcing and cause fires. NTSB said the recommendation is based on preliminary findings in the ongoing investigation of the July 29, 2016, in-flight breakup of a Piper PA-31T medical transport flight in California. Urgent safety recommendations are issued in advance of the completion of an investigation when the NTSB believes “an imminent threat to life and safety exists” based on the findings of the ongoing investigation.

According to NTSB, investigators in the July accident found evidence of thermal damage near the airplane’s main electrical bus circuit breaker panel. “This enclosed space also includes hydraulic lines that run directly below the panel. Further examination of the wiring in this area showed evidence of electrical arcing, and sections of the adjacent hydraulic lines were consumed by in-flight fire. Evidence thus far indicates that the in-flight fire occurred in the area where these electrical wires and adjacent hydraulic lines may have been in contact,” the board said in a news release.

Current maintenance procedures do not provide adequate guidance for inspection of the area of the floor-mounted circuit breaker panel because of its location and the confined space in that area, so contact between electrical wires and hydraulic fluid lines can persist undetected. NTSB and FAA investigators examined this area in six other Piper PA-31T-series aircraft and found electrical lines in direct contact with hydraulic lines on all six planes.

FAA issued a special airworthiness information bulletin on the wiring issue in late December, and NTSB said it believes the wiring condition merits an emergency airworthiness directive from FAA that would require mandatory action and a shorter timeline for addressing the situation. “NTSB believes that owners and operators must identify and repair (or replace) damaged wires in the floor below the main circuit breaker panel and ensure proper clearance between wires and hydraulic lines.”

Caption: In this photo taken in a Piper PA-31T, white electrical lines can be seen in close proximity to metal hydraulic lines. The NTSB believes this wiring may chafe and then arc, causing a fire and subsequent damage to hydraulic lines. (NTSB photo by Mike Bauer)